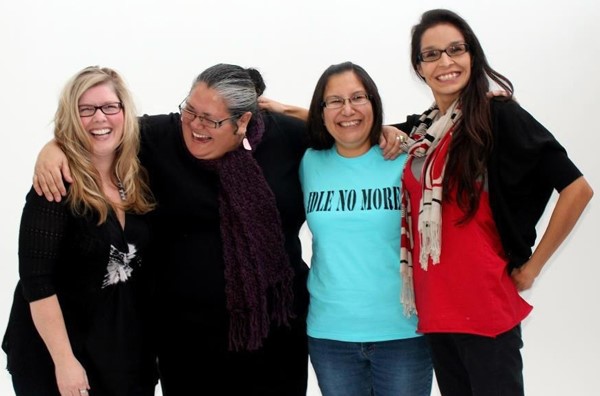 “The way we see it,” Sylvia McAdam tells Windspeaker, “we’re just going to keep moving on until our goal of Indigenous sovereignty and the protection of land and water is in place.”

As one of the four Saskatchewan women who founded the Idle No More movement late last year–a phenomenon which in only two months has transformed the conversation in Canada around Indigenous People –McAdam has faced a steep learning curve about social activism, political manoeuvering, and media spin.

Hailing from Big River First Nation, the Cree woman never quite expected the series of teach-ins and events she organized with Nina Wilson, Sheelah Mclean and Jessica Gordon to explode in the way it has: massive round dances, a full-scale powwow Grand Entry in the West Edmonton Mall, and demonstrations overseas and a 44-day hunger strike in the shadow of Parliament Hill.

“At first, we were seeing all this political stuff happening,” she ponders, when asked what’s next for the movement. “I think we’re moving past that, and I believe that the voice of Idle No More–the voice of grassroots people–will become clearer and more focused, in terms of its direction and its vision.

“I think this is where people are mistaking Idle No More as an Indigenous movement; really, it’s a grassroots movement for all people. It’s an energetic movement, and it’s bound to inspire all walks of life. It’s a beautiful movement and people want to be a part of it. It’s inspired grassroots people to be creative in their resistance. When we speak of water and the protection of water and land, of course it’s going to motivate and inspire people to want to protect that for our children and the generations to come.”

But the movement’s aims, which have oscillated between the repeal of federal omnibus bills C-45 and C-38 to a much more transformative vision–the de-colonization of Canada–have clearly touched a nerve among a substantial number of people.

That passion for change is no surprise to McAdam, a cultural educator and author of the book Cultural Teachings: First Nations Protocols & Methodologies. Growing up on the Prairies, McAdam has experienced both the heights of Native culture and the depths of injustice.

“My parents very much lived off the land, when I was growing up in the winter,” she revealed. “In the summer, we were sent to Alberta to work.

“I’ve [since] spent a whole summer just going back onto the land and seeing first-hand–witnessing–the devastation… I’ve seen many injustices done through the Indian Act towards Indigenous people. I recognize the injustice of Bill C-45, and it’s not just Indigenous people that this injustice is directed at; it’s now directed at Canadian citizens as well. There’s an injustice happening, and people have a right to know.”

Some Indigenous activists–particularly those pouring their efforts into Native rights and land defence struggles which long preceded Idle No More–were at first puzzled by the founding women’s choice of names, spawning a rival Twitter hashtag, #NeverBeenIdle.

But McAdam admits it was the founders who they felt needed to be kicked into action. She cites as inspiration the Defenders of the Land cross-country grassroots network, Mikisew First Nation’s 2005 court victory over treaty rights violations, and the struggle against oil sands and pipelines in western Canada.

“When Idle No More came to be, the name itself didn’t mean to dishonour previous activists,” she explained. “It meant, at the time, that the founders were idle – we were idle!

“We honour all the previous activists. In fact, I believe it’s because of their work that Idle No More came to be. They’re the ones who planted the seeds out there. It was just a combination of the right message and the right timing, I think, and the people were ready to hear the message of Bill C-45’s impacts and implications–all these different things–I think that’s why Idle No More has become such a force, the way that it is.”

While the movement’s message–and its signature round dance flash mobs–have spread via online social media, McAdam has struggled with its portrayal by the corporate media. She herself has faced controversy, after media outlets reported that she had distanced the movement from Chief Theresa Spence, Aboriginal leadership and blockades alike. She insisted many comments were inaccurately reported.

“You know, it’s a thing that one can expect,” she said. “It’s been taken out of context.

“I’m not media-savvy at all. I’m not a politician by any stretch of the imagination. I am very much grassroots… This is what I’m trying to convey to the media. And unfortunately, the mainstream media is not doing a very good job. This is how come we’re trying to reach out to those grassroots media, and inviting them to be our voice.”

In particular, the Idle No More founders’ cautious approach to Native leadership–in particular, the key role the Assembly of First Nations played in the Jan. 11 federal meetings–was seen by some as an assertion of grassroots direction, and others as unnecessarily divisive.

“For people to say that we’ve excluded leadership, that’s not accurate,” she said. “There are leadership that supported us right from the very beginning, and they did that without trying to take over the voice of Idle No More… and have been in the background.

“The thing about movements like Idle No More: history has shown that, once leadership takes over, the movement shifts. The thing that’s unique about Idle No More is we’re not limited by anything–except for your usual laws, the ethical, moral and legal boundaries–but for leadership they’re limited by their political and Indian Act limitations. Idle No More doesn’t have that.”

With the movement holding its latest day of events across Canada and the U.S. on Jan. 28–and McAdam herself flying to the UK to address allies there–the Saskatchewan founders are confident that Idle No More will continue evolving and pushing for change. But the support isn’t solely about bodies in the street or at a round dance.

“I want to ask the elders and all of the churches–all the denominations–to say a prayer, and to join us,” she said. “The environmental assessment threshold has been lowered and in some cases totally removed from some waterways. This puts all of our water at risk. I think that’s devastating and very dangerous for all people.

“If you’re thinking about joining this movement, whether you’re Indigenous or non-Indigenous, I ask that you put the past injustices aside, and join Idle No More for the love of our children, and for the love of all of our lands and our waters. That’s what we ask.”