Grief and anger over injustice simmers under surface 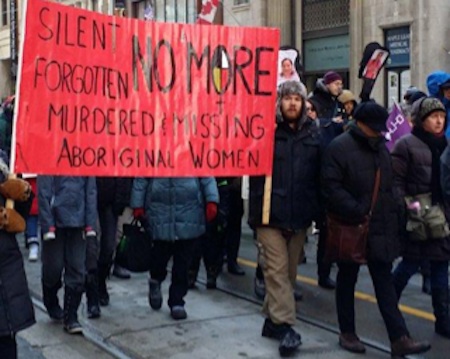 Canada’s missing and murdered Indigenous women were commemorated with a Strawberry Ceremony on Valentine’s Day.

The ceremony, held at Toronto Police Headquarters at Yonge and College streets, celebrated its tenth anniversary. More than 800 people gathered to pray, sing and remember the thousand-plus daughters, sisters, mothers and aunties whose lives were cut short by violence.

Helyna Rivera, a Mohawk woman from Six Nations, was murdered in Buffalo on Aug. 10, 2011. Last year, her killer was sentenced to 25 years by a Buffalo court.

Rivera’s grandmother, Renee Hess, addressed the crowd, promising that, “even though the grave has silenced my granddaughter’s voice, I will continue to speak for her.

“When we stand up and speak for ourselves, we are looked at as terrorists here in Canada. I refuse to be called a terrorist. I am a protector of our land and our people.”

Rivera’s mother, Linda John, wept as she spoke publicly for the first time. Holding up a picture of her daughter in her powwow regalia, she said “Three years ago, my 26-year-old daughter was murdered, shot down, gunned down by the only man she ever loved. She left four beautiful babies that I now take care of.”

The two youngest babies, she told the crowd, witnessed the murder. John said she’s learned about the violence against her daughter that took place behind closed doors and has had to rise above this for the sake of her grandchildren.

“Without the Creator by my side, I don’t think I would have gone this far,” John said. “Grab onto something, believe in something because without that power, you will be lost. There was a time when I thought my life wasn’t worth living,” she said. But when she faced her former son-in-law in court, “I looked at him and I stared and I said, ‘There will come a day when I rise above my pain, above my heart, which has been broken, shattered and then I will make an awareness and I will help’.”