Commission has authority to conduct MMIWG inquiry as “they see fit” 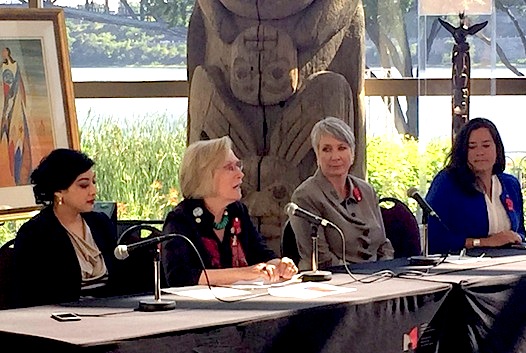 The chief commissioner for the national inquiry into murdered and missing Indigenous women and girls says she and the other four commissioners accept the “serious responsibilities” that have been given to them.

This morning, British Columbia judge Marion Buller was named as chief commissioner for the inquiry. She is joined by Michele Audet, Qajag Robinson, Marilyn Poitras and Brian Eyolfson. All members are Indigenous.

“Our goal is to make concrete recommendations that will ensure the safety of our women and our girls in our communities,” said Buller, after the work undertaken by the three ministers who led the pre-inquiry was symbolically passed on to her in a birch basket containing a memory stick. “We are committed to doing the difficult work ahead of us.”

The Department of Justice will also be providing new funding.

An emotional Jody Wilson-Raybould, justice minister and attorney general, announced $16.17 million over three years to allow provinces and territories to establish family liaison units to help families get information on lost members. As well, $4.5 million will be used to support victim service projects across the country.

“The national inquiry will focus on the root causes of the disproportionate rates of violence of crime against Indigenous women and girls and on the extent of the vulnerability to violence. We need to identify the causes of those disparities and take action now to end them,” said Wilson-Raybould. “We know that the inquiry cannot undo the injustices that Indigenous peoples have suffered over decades, but we can review what happened in the past, reflect on our present circumstances and chart a path moving forward.”

Indigenous and Northern Affairs Minister Carolyn Bennett said the national inquiry is unique in that not only is it supported through the federal Inquiries Act, but provinces and territories are in the process of passing orders in council giving the commission access within provincial and territorial jurisdictions. The commission will be supported by regional special advisory committees.

“We are handing over authority to the five commissioners to conduct the inquiry in the manner they see fit,” said Wilson-Raybould.

The terms of reference for the commission are here .