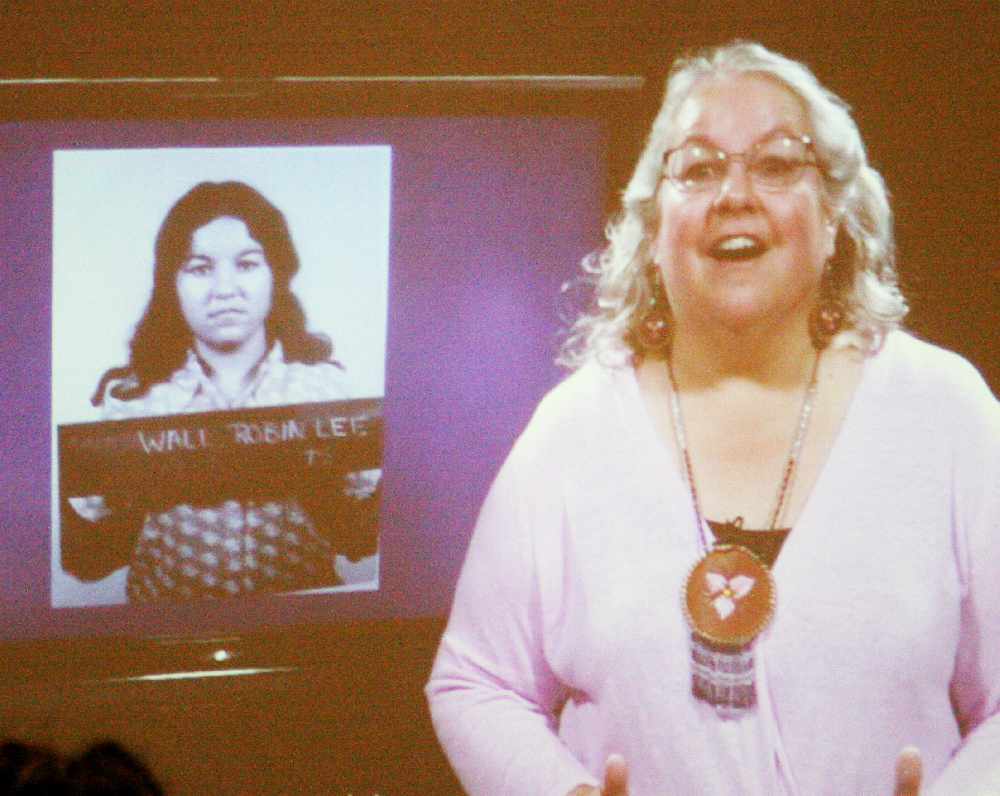 “In this year, which is the warmest ever recorded on the planet, and in this time when we have entered into the age of the sixth extinction… it is important to remember that we humans can’t innovate our ways out of this alone.

Robin Wall Kimmerer, botanist, SUNY distinguished teaching professor, founding director of the Center for Native Peoples and the Environment, and citizen of the Potawatomi Nation, appeared at the Indigenous Women’s Symposium to share plant stories that spoke to the intersection of traditional and scientific knowledge.

She said it was a perfect topic for the gathering because Indigenous women and plants “we go way back.”

Kimmerer, who as a result of a lake effect snowfall and the closing of highway 81 in upstate New York, appeared at the symposium at Trent University by video link.

She told those gathered for her keynote address Feb. 9 that plants are a part of her identity, not only as a botanist, but also through her cultural identity as an Indigenous person.

In some instances, links can be found between Indigenous knowledge and scientific knowledge. Take, for example, Sweetgrass with its sweet vanilla fragrance which is an invitation to ceremony. Sweetgrass is one of the sacred plants of Indigenous peoples, said Kimmerer. It was also named in the scientific realm by Carl Linnaeus, who named many plants in the 1700s. His botanical Latin name given to Sweetgrass translates to holy grass.

But science and traditional ways of knowing the environment over the years since Linnaeus have not neatly converged, and often not at all. And certainly not when Kimmerer was applying to college when she was 17.

Kimmerer said she was a born botanist. As a child she collected seeds in shoeboxes and kept them under her bed. She would stop along a path to identify a new species of plant. But it was the beauty of plants, particularly the colors of the Goldenrod and purple Asters that blossomed together in September, that attracted her to the study of botany.

“Plants colored my dreams,” she said.

While applying to college, she told the professor at registration what she wanted to learn from botany: Why did the Goldenrod and Aster look so beautiful together?

“That is not science,” she was told. “If you wanted to study beauty, you really should have gone to art school.” She then told him that she wanted to learn why strawberries were sweeter when grown in the shade.

That wasn’t science, either, the professor said. The college did take her as a student and enrolled her in a General Botany program if only “so she could learn what botany is.”

How could she have gotten it so wrong, she thought, but she’s since realized that her first day of school was an echo of her grandfather’s first day at Carlisle Indian Industrial School “where he too was told that what he cared about, what he believed in, the way that he saw the world was not welcomed there.

“That theirs was the only right way.”

When she grew up in the woods and the fields she knew plants as teachers and companions. “They took care of me, and I took care of them.”

The botany that she was taught in school, however, was not that. It was materialist. How does it work, what is the economic importance of it “not who are you and what are your gifts?”

“I feel so badly for my own inability, at 17, to articulate what it was that I wanted to know, the way that I understood plants.” At the time it made her quiet. She thought her understanding must be wrong.

“I was not yet ready to have a voice to reclaim our ways of knowing.”

What was being taught was nature as a machine or object rather than nature as a relative, and the program’s worldview was so foreign to her that she nearly failed freshman Botany.

But she set about to learn the scientific Latin names of plants and the engineering of how plant systems worked, and she discovered that the more she learned the more fascinated she became with science as a way of coming to know the plants around her. Science became a strand in her braid of Sweetgrass.

But by walking on the path of science, she had stepped off of the path of the Medicine Wheel where there are four ways of knowing—through body, mind, emotion and spirit, she said.

In the Western scientific tradition, only the mind is privileged, and the body so observations and measurements can be taken. But the emotional and the “mysterious” spiritual ways of knowing were not welcomed in academic science, she said.

It took her a long time to come home.

But she’s pleased to say that right down the hall from the professor who first told her that beauty was not science is the Center for Native Peoples in the Environment, of which she is a founding director. It’s where Indigenous ways of knowing, the philosophy and the wisdom, are brought together and paired with the powerful tools of science to care for Mother Earth.

Kimmerer believes that science is a powerful way of knowing to answer certain questions, but there are other questions for which other ways of knowing are needed.

The question that was much on Kimmerer’s mind as a college freshman was “Is the world object or subject?” Kimmerer said it is an ancient question dating back to the Greek philosophers.

Plato was on the side of a very serious debate that  asserted plants had ‘virtuous souls’ because of their beauty and creativity, while others argued against plants even being alive, said Kimmerer.

Aristotle, for example, believed that plants had only a vegetal soul, being only able to grow and reproduce.

“Dismiss these theories as trivial and abide by sound reasoning” he wrote, classifying plants as objects. Aristotle went on to create a hierarchy of beings, called scala naturae, with plants at the bottom and humans at the top, “just below the angels”, said Kimmerer.

This thinking persists today, but Kimmerer believes that the concept of plants as objects strips us of our responsibility to them. “They are just stuff.”

But in Indigenous ways of knowing, plants are not viewed as the lowest, but as esteemed and respected persons. Kimmerer said she didn’t mean anthropomorphized versions of humans, but beings with their own gifts to share, their own intentions, sovereign and capable of charting their own pathways.

Today, this way of knowing plants is on the cutting edge of contemporary plant science.

Plants are the oldest of our teachers, Kimmerer said.

“Let’s remember tonight as we go forward that one of the hallmarks of Indigenous ways of knowing is that we are blessed by being surrounded by intelligences other than our own,” she said.

“In this year, which is the warmest ever recorded on the planet, and in this time when we have entered into the age of the sixth extinction… it is important to remember that we humans can’t innovate our ways out of this alone. It’s a good thing that we have our plant teachers.”

Elder plants know everything needed to know about surviving into the future,” Kimmerer said. There is a lot they can teach us in this time of dramatic change and adaptation.

Kimmerer joked that plants are not in endless meetings debating carbon tax structures, nor have they abandoned the Paris Accord. Plants have already converted completely to a solar economy, a model for human transformation.

She talked of the lofty goal of entrepreneur Richard Branson’s Virgin Earth Challenge and its $25 million prize for someone to come up with a new technology that would take carbon dioxide out of the atmosphere, removing greenhouse gases.

Kimmerer said there already is a system that does this. It’s takes carbon out of the atmosphere and emits oxygen, it purifies water, and builds soil.

“Of course, that invention is the forest,” said Kimmerer.

Science is starting to learn that plants can communicate, make choices, learn, strategize, and hear and respond to what they hear. They have their own stories, intentions and gifts.

“Science is catching up to our traditional understanding of the personhood of plants,” she said.

Plants are intrinsically valuable with gifts to share. They are more than objects, natural resources or things that can be turned into commodities.

“I want to challenge my colleagues that work in departments of Natural Resources and ask them wouldn’t you rather teach in the department of Earthly Gifts.”

The words we use really matter, Kimmerer said, like the word “sustainability”. Potawatomi Elders, upon hearing a number of definitions for the word sustainability said it sounded like a word that meant a way to keep on taking.

It’s not right to keep on taking, they said. People should be thinking about what they have that they can give back. We should have mutually beneficial interactions, said Kimmerer.

Those kinds of teachings are largely missing from schools on natural resources, she said.

“So the question that really focuses us now is this one: In return for all of the gifts of the plants, how do we reciprocate? How do we give back?”

Kimmerer said this was the most pressing question of our time. It’s the way the world actually works.

“We know through ecosystem function that you can’t just take without replenishing. That’s not possible… Reciprocity among all the parts of the living world is what produces the conditions in which life can flourish.”

Human beings seem to be the only species which pretends that such a necessity of function does not exist.

Ancient wisdom tells us, said Kimmerer, that “the hallmark of an educated person is a person who knows what their gift is and how to give it in the world.”

There are gifts that humans can offer in return for the wealth of gifts that plants have provided, including the act of paying attention, a unique human gift that can be given back to the plant world as an ongoing act of reciprocity.

“Attention generates wonder which generates more attention and more joy which leads us to gratitude.”

She said paying attention requires that we see not only the beauty, however, but also the pain, to celebrate the old growth and mourn the clearcut, to see the mountain and to see the mine.

“Paying attention to the suffering in the world sharpens our ability to respond, to be responsible.”

When you fall in love with the living world, you can’t be a bystander to its destruction, said Kimmerer.

Robin Wall Kimmerer is the author of “Braiding Sweetgrass: Indigenous wisdom, scientific knowledge and the teachings of plants (2013) and “Gathering Moss” (2005).