Chief Adam Dick: In his own words. 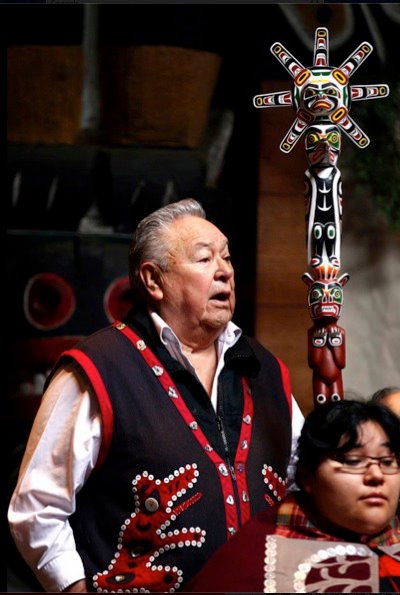 I wasn't allowed to play a lot when I was small. When there was something going on in the village they would send a couple of men to come look for me and take me, wherever… especially when they had conferences to talk about the potlatches.

And I used to hide, because I liked to play… I don't know what the old people used to see in me, why they chose me, because there was a lot of other kids besides me that I played with. And they picked me.

It was really hard. When I'd get tired on the train, they'd hit me on the hand and say 'You stay awake and listen, 'cause one of these days you are going to be on top of your people.'

Later on, when I was growing up, the old man (Herbert Johnson) came to me. 'We're going to go up the river.' So we pulled up river, and we hit a sand bar, and I didn't question him why we stopped, why did he take me up the river. And he said, "Who is the speaker who you like to listen to?"

And I named this guy, this old fella… ‘Well,’ he said, ‘go ahead, you better start. Top of your voice. Start speaking 'cause this is where you are going to be. So I started speaking away there, in that river there, on the sand bar.

And they never said too much when we came back, paddling down river. So they took me home. Well, we landed right in front of the house on that beach. So I went home and he pulled his canoe up to his beach.

Honestly, I used to hide when there's something going on in the village, because I wanna play. I lost all my marbles, because they would just take them… I don't play marbles anymore… It was hard for me, 'cause I stopped playing with the boys.

When they'd meet behind the village—only the hereditary chiefs were there, the clan chiefs—and they'd talk about what's going to happen all through the eight days of the potlatch. And my grandfather used to get up and say 'If anything happens, somebody says anything, don't take it into your houses, just leave it here,’ if there was a disagreement in the meeting in the forest.

I'd get a stick and I'd play with it on the ground and he'd say, 'You listen here. You listen carefully,' always used to say to me. My brothers and sisters went to school, and I wasn't allowed to go. I wanted to go. They didn't let me.

When I was given that name—Kwasisala (meaning ‘The big house smoke from my fire reaches around the world’) —I guess that's the first potlatch my dad had. I can't remember. So I've been potlatching since… You can't until I go… take over my… position in the potlatch world.

They used to take me in the longhouse and, I guess, it's what you would call lecturing me, all this and that… constantly working on me. My question is, why me, because there was a lot of other kids there.

My grandfather told me, where he got his power from. He was a very strong man. Oh boy. That's not too long ago. They said he got it from the mountain goat and his name was Kasalid. He was what we call Paxala (medicine man), and he composed a song up the mountain and he brought it down. And that's when he was in contact with the Sisiutl (double-headed serpent). What you see up there. What you call Sisiutl.

They heard this noise. I guess it's not very long [ago]. The rifle was here. When they first came, they saw this mountain goat and they wanted it and they walk, walk after that mountain goat. Every time they got close enough, the mountain goat gets up, and start walking again.

It was just before dark when a mountain goat was laying on a rock. This is top of the mountain, and he said something. He said to my grandfather, 'You take that' whatever it was around his neck, 'get it to a cedar block and put it on it and put it inside when you go home.' And he did.

He heard something coming down. . . something like the wind hitting the tree tops and he look up and see the Sisiutl coming down. And he knew he was in trouble. He wouldn't turn. He was just backing up... backing up and he felt something. So he grabbed what it was and it was a branch. So he bite the corner off his tongue, let it bleed, then he put it on the end of the stick and went like this to this animal and they come apart.

And when they come together again he seen his sister in the middle of this monster. . . this animal. So four times he did that and this animal walked up the mountain. And that's where he got his power from. And then he composed that song when he was coming down the mountain.

And when he came down amongst the people, they told somebody to put a fire on the big house, so that the Ninogaard (trained specialists) can learn this song, so they can dance.

[That song] the boys are using it all over the country now. The only time it's supposed to come out is if I sing it. There are songs, what they call [mourning songs] when my grandfather died and they sang [mourning song], and all the ... noble ladies went down to the beach and looked for clam shells and scratched themselves, let themselves bleed on the edge of the river there. And there's a song for that too, when they do that…

And it came out when my sister died. The song came out a second time. And my other sister died and it came out the third time. And I sang it in Alert Bay, the fourth time. Now it's all over. The kids are just playing with it. And it's connected to the mourning songs…

And when you play with it… it's very dangerous. And that's what these young people don't know. We've lost respect. We've lost that. We have no respect anymore. That's the biggest loss we've got. That's what I see. And we almost lost the language too, but it's finally coming back…

You know the potlatches that we do, it takes eight days to complete. Now it only takes one night now to complete the potlatch. There's a lot of these things that we don't do anymore, ‘cause nobody, this generation, nobody sees the real potlatch, what I went through… all the teaching I got.

[The potlatch] takes eight days to do; what they call the women's dance and when the Hamatsa (wild man—the highest ranking dance of the Kwakwakawkw people) comes it takes four nights to tame this dancer, this Hamatsa dance. But now they can do it in one night now, one night. 'Cause they don't know. They don't know what to do, because this generation never was taught. You know, the teachings' not there anymore…

I've built five canoes with my grandfather. When he had his stroke and had to finish one before he died, I finished it myself…

In the winter months, I guess, we didn't quite finish the canoe, and we lifted it up. We got the boys to lift that canoe up so it doesn't freeze on the beach, lift it up and put logs underneath it. It was really cold then. I guess it was the month of January and the river was frozen. It's frozen and when the tide's coming up, the ice starts breaking… and when it cracked you could… it's like screaming when the ice is cracking.

And the old man, he was just sitting there, looking at the ice when it's cracking. The sun was out and the tide was coming up and he composed that song, right on the beach there about the noise of the ice when it's cracking. And we used to sing it with the old man, every night. Now they're singing it all over the place now and they claim it that it belongs to them. It's not so. It's not so.

It's not like that. A lot of these old people they have no training at all, like what I had. It doesn't matter how old you are, if you are not trained, you don't know too much about it…

And then they look at you now and say, she has more gray hair than I have so you're more knowledgeable than I am.

I always say this, that my profession's gone now, because they're making their own rules. When you enter the big house, your name changes, your feelings change, your language changes. And I'm the only one now that can use that language called the potlatch language.

I used to notice people sitting in the audience there writing down every word I said. And they come and ask me after 'What did you say that for? What does it mean? Why did you say it?'