Elder Joe Cardinal: In his own words 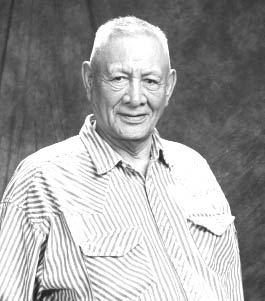 Windspeaker.com Buffalo Spirit Archives (Joe P. has since passed on)

I don't know all the things that I am supposed to know, I guess. I will talk about myself first and that way you will know who I am and what I do in this kind of work that they call spirituality.

I was born close to Fort Chipewyan. I'm a bush Cree, I guess, to start with, but I migrated to the Plains Cree—Saddle Lake. My parents were trappers. And I still remember them days when I was small, the work that I had to do as a small boy on the trap line.

At that time, all the family were on the trap lines, mostly up in Birch Mountains, Muskeg Mountains, Athabasca River, Lake Athabasca. I belong to that country yet, in my mind and in my spirit. I flew over it a few years ago and I saw it from the air in the summertime and I felt good about it. I felt good that that's where my parents started me in life—beautiful country, healthy country, healthy lifestyle.

I come from a fish culture. We ate more fish at that time than anything else. Oh, we'd eat rabbit, we'd eat muskrat, we'd eat beaver, we'd eat moose, but it was more fish—lake trout from Athabasca.

On the Athabasca River, there is whitefish on that Athabasca River. They spawn like lakewhitefish in the fall-time. And yet today, I eat a lot of fish. I can eat fish every day…

I guess my parents wanted me to go to school. I guess there was a boarding school in Saddle Lake called Blue Quill boarding school. It had no running water. It had an outhouse. We had a hell of a time there. I started out there in 1929.

I can't say I went to school, but I attended the building anyway. I lived in the building, but to go to school…

At that time they were industrial residential schools. We had to raise cattle, pigs, chickens. That's the way we survived. So finally, they made a new building there, by St. Paul—Blue Quill. I guess maybe some of you have seen that building just on this side of St. Paul, off the route. And that's where I was for seven years.

It was a new land. They had to break and we cleared the land of rock, roots. We had to milk cows twice a day. Sometimes we milked 24, 25 cows every day, twice a day. The work was meant more for that school than classroom education. So we had to go to classroom every Friday afternoon.

So, we used to tease the hell out of that nun there that used to chase us out. She didn't catch that idea right away. That's what we wanted is to get chased out of there. We didn't like that classroom. But after seven years when I was ready to go, I was graduated Grade 6! And I never went to school! I still think about it. How did I ever get Grade 6?

Shortly after, the war broke out and I joined the army, I was with the Eastern outfit, Micmac, and the other tribes over there. I used to ask them, I says 'What grade did you come out?’ He said, ‘Grade 6.’Everybody I met was in Grade 6. You know, I don't know what happened….

I was scared of them white people over there. You know, they'd kill me right away. But when I came back to Saddle Lake I was a prisoner of war. Them days you had to get a pass to get out of the reserve. I became a prisoner in my own reservation.

Boy, it was hard. Over there in Europe I could drink beer, I could do anything in my free time. I was free. But then, when I came back, it was hard. I got lost. I used to find myself staring at the sky, not knowing where I was…

Finally, I start to fit in. Finally, they didn't issue any more passes…

So, finally, I got married. That's 53 years ago now. Just imagine being with one woman all them years; 53 years! So, I had children… Two of them went to the boarding school. Then they closed the schools down. But we started talking about we have to raise our kids. Raising kids we started to talk about a lot of things.

I don't know, at that time, I didn't understand the Catholic religion, because it was all Latin. And a lot of things there, after I went out of the boarding school, I couldn't believe. And there was a fellow there that made Sundance, and we used to go to the Sundance and the feeling was better because I understand.

The belief was in me all these years, I guess. It had to be woken up in me; wake it up. And that's what happened. I saw a lot of things back there on the trap line and with my own people and I start to see that.

And years later I started with a medicine man from Wyoming. He was well-known around this area, Raymond Harris. I started working with him… I used to fast every year over there, in Wyoming. He taught me a lot of things.

We all believe there is a god, or whatever you call him—Great Spirit… He doesn't talk to us like we talk to one another, but he put things in our being, the spirit, the heart, and the feeling. So when you do wrong you know, he's telling you, he speaks to you through the feeling, through the heart.

This is a great area here for me [pointing to his heart]. People can heal themselves, if you do things right, if you know what is going on within you. And that's what this man taught me. But I knew we had it before.

The mind: You hear that expression, 'it's a long way from here to here [gesturing first to his head, and then to his heart]. It's a long journey, because, this mind is the one that goes. It's going all the time. That's your protection. And sometimes it goes into a negative area. And maybe that's where we are now in the communication system. A lot of it is negative areas.

Sometimes we talk about a person negatively, because this mind it wants us to do that, to protect ourselves. But this fellow here, [pointing to the heart] is the one that really puts things together for you.

I watch in the city here sometime, cars just going, going, going. I look up at the sky and the plane… Who made that? The mind is the one that created that.

When that plane fell, recently, with over 200 people in the water, this guy says, 'These kind of planes can go down every day. Maybe five of them can go down every day.' That's the amount of people that have heart attack every day, because this mind is going. It's not keeping time with this guy [the heart]. This one [the heart] is the one that is left behind and having problems, and that's why it give out. And I believe in that, because I know a lot of people that have problems today…

You don't develop your love, the love for your children, the love for your family, the love for your community. Just remember, when you were conceived in the womb of your mother, the first thing that was made was that heart starts to pump, and life was built around it. But you guys are not using it.' Today we find people trying to come back to an area where they can understand that feeling too.

This Raymond Harris used to tell me, he says 'remember one thing, that you cannot heal anybody. They have to heal themselves. You are the one that's going to try and help them to heal.’ But I hear Elders say 'I healed many people,' and I look at them, you know… This man told me you cannot heal, but you can help, you can tell them…

So I put up a fast every year. Many people come to fast at my place. Many people ask me to get them to be medicine man that they can perform a shaking tent or something like that. I says 'no, I can't do that. I want to help you. That's why you're going to go to fast.'

Before you go to that lodge, when you are on that journey to the lodge, we stop four times. The first one, when we stop, there is a lot of people following, going to see these guys going to their lodges. We stop and we're supposed to think when we were small, growing up. How was it at that time? How do you feel when you look back to your childhood days?

And there is a lot of things there. That is a big area. And then we go to lodge after. And then you start thinking about these. And you are the one to deal with them.

There's a lot of these people, alcohol is the problem, drugs. Some of them are healed. They don't drink any more. And they come to me, you know, he says, 'you healed me.' I says, 'I didn't. You were the one that healed yourself.'

In the sweat lodge after the fast, I tell them, I says, the way Raymond used to tell me, he says 'tell them, you did not heal them. Tell them that the Great Spirit, the way he made you, the gifts that he has given you to use, these are the ones that healed you.'

May is the New Year for our Indian world. It brings forth a new beginning, this year. Grass is coming out, leaves are coming out, the birds are laying their eggs, animals are born, everything . . . . Even you have a different feeling and that's the time people come to fast. It helps them to have that feeling of belief in themselves….

I cannot help people to be a medicine man, to be able to perform a shaking tent. Some things are given to people. That Raymond, it was given to him. He says, 'I grew up with it. At 21 years old' he says, 'I was told to start, to deal with that, the people. And I went to the priest,' he says. He was raised in a boarding school, and went and had a talk with the priest.

But yet, a lot of people that he worked with are still carrying on their way of life, the way he taught them. And that's the way I am trying to work too.

He told me, he says, 'You are a Cree. You will have your Cree understanding. You will be working as a Cree.’ So it happened. I'm still working with the Cree. But the thing is, we all have the same thing. There is no one that's made differently.