Mary Thomas: In her own words 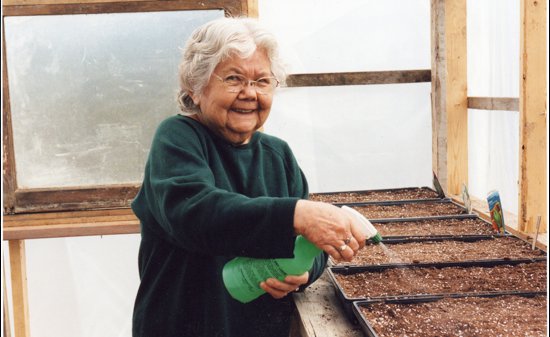 “You know, the more I learned about my culture, the values and the philosophy of the culture, it started to change me.” ~ Mary Thomas

I was born and raised here in Salmon Arm. I guess my mother and father, they were born down at the Neskonlith. That's in Chase area. When they started farming the reservations, they were one of the first ones to settle in the Salmon Arm area.

I think it had quite a bit to do with the abundance of food that was found in this area, as well as the railroad track was coming in and they were needing a lot of cord wood for lighting up the locomotives.

So it was kind of the old and the new way. You know they had to adjust to the white man way of living.
Together with them, they brought his mother and father… and they were the grandparents that we grew up with. Prior to that, our people used to roam quite a bit. We were nomadic. The Shuswap people were nomadic.

They travelled to where food was plenty and gathered for winter; winter use. But when they started forming the reserves—the government put us on the Indian reserves—they had to change their whole lifestyle.

You had to adopt the new way of life by clearing land and plowing and planting the different types of food that was not a part of our culture. They were forced to do that.

So my mother and father were so busy, doing what they had to do to survive, that our grandparents took over. And I have such loving memories of my grandparents. We did a lot of things together, like they maintained a lot of their natural foods yet. We really enjoyed things our grandmother did.

Then she would tell us the legends that had lessons to it, what you're supposed to do and what not to do.

It was so nice. It was so full of love. And the many things that we did, it was all game to us. We used to play quite a bit. When we would go down to the river to gather rope hemp, it was very light. She'd bundle them and she'd tell us, 'you pack it over and put it in this one big pile.' And we did it as a game and we pretended that we were horses. Everything was a game. It was so happy…

But there came a time when our whole life system changed… Our family units were like a big circle, just the way we were treated as children—the mothers and fathers, the aunts and uncles, the grandparents, the cousins. We were all on the outside of that circle. In the middle was the little ones, and each one of them had the responsibility to help those little ones become a part of the outer circle. And that builds the families really strong….

I can remember when we were living on reserve. Our grandmother, grandparents, our parents, they used to tell us if you see a white man coming, run and hide. Because there was terrible stories about what happened to the women….

Contact. Where women were molested by these non-Native guys. One woman even had her baby on her back and they knocked her down and raped her and her baby suffocated. Those stories, they would talk about, and we were deathly scared of non-Native.

So when we went to the school, we didn't know what was happening. Nobody told us what was going to happen. When we walked in that school, all we seen was this nun coming down the hallway, all in black and just her face showing. We were terrified. It was so scary.

Then, right away, we were told we were not allowed to speak our language. We had to forget about our language. And we were told, never to practice, not to believe, the spirituality of our people. It was taboo. 'Never believe it. It's the work of the devil.'

And every morning, we would get up at five o'clock in the morning—perfect silence. We couldn't speak a word. If you were caught, you were strapped. And we filed into the chapel by 6:30. We were in the chapel. And every morning was mass.

And the priest there would pound the altar, rail about our people were savages. And you know, when a little child is growing up, knowing, that's all you know, you begin to wonder what is happening. We began to get confused. We loved our mother and father. We loved our grandparents, and what we were told is that they are the ones that were carrying the work of the devil. It gets you so mixed up.
I didn't know what a sin was. And yet we used to go to confession and make up things just so we could confess something. It's just so negative.

And when I came out of that school, I really wanted to become like the white people. I didn't want to go back to the reserve. I was really confused.

And we couldn't go beyond the age of 16, cause we were told when we reached the age of 16, you're automatically dismissed. We had very little reading or writing. It was mostly domestic work…

When I turned 16, and I came home, I was a very rebellious woman. I felt that if my mother and father loved me enough, they wouldn't have allowed me to go and experience all that pain and frustration.

And then I hated the white people because of what they represented; always dominating you. 'Do what we tell you do. Never question us.' You never questioned a white person.

I lived with that for many years and I was a very, very hateful person. I was carrying a lot of pain, a lot of low self-esteem.

And yet, I guess, all the time I could hear the Elders talking about different things that they did. Somehow that registered. I was accumulating all that knowledge. And I always attribute that for the love I had down deep. I had a real love for my grandparents and my parents. But I didn't know how to show it. I didn't know how to go about adjusting my life to that.

So, I used to think, if my parents didn't love me, somebody will learn to love me for who I am. When I turned 19… at that time there were fixed marriages. I rebelled.

"No way. Nobody's going to choose my husband. So I took my own way and I got married. We moved down the States. And that time the war broke out, Second World War. We came back to Canada and my husband enlisted like all the rest of the Native boys.

They all voluntarily enlisted. And I always attribute the residential school and the Second World War as the two episodes in our lives that really did the biggest damage. Prior to that, you never heard of our people drinking. There was no drinking on the reserves…

I believe that the Second World War, when our men came back, they were changed people. They were drinking really heavy. And when they came back they kept on drinking.

And by that time, the government said, 'we'll let the Indians go in the beer parlor.' So it was pushing us over the brink. There was a lot of child neglect, wife abuse. It was just terrible. And I went through that whole ordeal. My life was so miserable.

I have memories of times when my husband would come home and beat me black and blue. I didn't drink. I stayed home and looked after my children… and other people's children…. I guess as time went, I got really sick of it. And I'm so full of anger, full of hate. Finally, my husband, drinking in town, I guess he had a bottle and he walked on the railroad tracks and the train hit him.

And I blamed myself… you know earlier, before he left, he was on the verge of beating me up again… And that day, I ran away. I couldn't take the beating anymore. I ran away and hid.

It's the day he walked into town and that evening he got himself killed. And I thought, 'Gee, if I had stayed and taken the beating, he wouldn't have died.' And I blamed myself. And that made it worse. I became a very, very bitter woman.

And about five years after he died, I guess, I felt lost. I had a big family. I was really, really scared. And at that time there was no such a thing as welfare. I didn't know who to turn to. Five years after he died, I met a man that offered to take me away from the reserve. Kids and all. I still had nine of them going to school. I don't know how we survived out there. But I had to get away…

My youngest one, Bonnie, she said 'You know Mom, they're talking about the Indian culture in the school.' And right away I thought, 'Well, what the hell for?’
She said, 'I know Grandma has a few things here. You think you could bring it up and show it to the kids?'

I said, 'Forget it. I don't want no part of that.' And she kept after and after me, and finally I broke down and I said 'OK.' Just to get her off my back I gathered baskets and that sash and the shawl and a few other things my mother had. I took it up to the school, and when they started asking me questions I couldn't even answer them because I didn't know. I felt really stupid.

Well, in the meantime, the curator of the museum in Kelowna gave me a job, asked me if I'd work with her. And I didn't even question what kind of work, as long as I was getting the money… So, I said ' Sure, I need a job. I'll take it.' And I said, 'What is the job?' And she said, 'The provincial government is wanting cultural input in the schools and we have applied for money to put together a school kit and we want you to help us.'

I said, "A cultural thing? What the heck. I don't know nothing about it.'

And she said, 'I'll tell you what we'll do. We'll write out a list of questions and we want you to go to the Elders and get the answers for them.' And this is where I got my start.

Luckily I can speak my language perfect. I started going back to the Elders and I started talking to them. And I could feel this real exciting feeling within me, like there was something trapped in there that wanted to be released. And it just had me so confused for a long time. And I travelled a lot around to different reserves, and meeting with the Elders I didn't realize that I was changing. I was beginning my healing journey.

And the more I learned about the culture and the things that could be mad,. like the bull rush mat weaving, the basket-making, the moccasin making, tanning deer hides. Everything I learned I had to do it.

My life was changing so rapidly. And when it came to the spirituality, I began to question spirituality with the people. It was part of our research. I couldn't believe what I was hearing, that there is a salvation, there is a healing in the sweat lodge.

There's so many different things that I learned, and you know the more I learned about my culture, the values and the philosophy of the culture, it started to change me. I began to change and that's what I call my journey to healing.