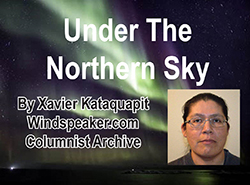 The first time I encountered a warm welcome from Native people here in Canada that were different from the Cree and Ojibway that I was familiar with in northern Ontario was with the Mohawks of Six Nations.

To be more precise I was introduced more than 20 years ago through my partner Mike to his sister Patty and her husband John Bradley. The Bradleys of Oshweken welcomed me into their family and made me feel at home in the south far away from my little community of Attawapiskat.

I was sad at Johnny’s passing on Oct. 8, 2018 at the Stedman Hospice in Brantford, Ont. with family and friends at his side.

Johnny, his dad John Sr. and mom Norma always made me feel at ease and invited me to family gatherings with an extensive family network. The great bond between us all had to do with quick, easy and encouraging humour. Getting together with the Bradleys had to do with a lot of good times and laughter.

Over the years I grew close to Johnny, Patty and their daughter Brooke, her husband Rob and their children Jack and Brynn. Johnny was an original who lived life as he chose to and always made time for family and friends.

He had such a great sense of humour and time spent in his company always brought forth a smile. For many years he was ill and still soldiered on with a great will to stay alive and present for his family and friends.

He followed in his father John’s shoes when he took over the ceremonial recitation of the poem In Flanders Fields at annual Legion and Native Veterans events. He had a great respect for all those who served in the military and in particular for his father who saw action in the Second World War in Europe.

Johnny pulled himself up to the task of visiting schools to educate young people on the importance of honouring all those who have fought in wars for our freedom. Even in more recent years when he had become an amputee and was seriously ill he still pushed himself to continue to sacrifice his well being and comfort to make sure he got his message out to young people.

Johnny was one tough cookie and spent his early years as an iron worker on many iconic high steel building developments in Ontario. He was fearless in those days and worked long and hard hours to provide for his family.

Later on he went to work for the Canadian Gypsum Company (CGC) mine just outside of Hagersville, Ont. close to his home reservation in Oshweken.  As a young man, he lived a rich life with many adventures with his friends Brian Doolittle, Ava Hill, Graham Greene and Carol Curley.

He was a loyal family man and friend. His good nature and strength lives on in his brothers Russ (Debbie) and Ron. He is also survived by Laurie Lambert (Fred) and Luanne Martin (Chris). His sibling’s children are some of the most talented, kind and open people I have ever met.

He loved to head out on the land to go fishing and he could always count on his buddy Jim Herkimer to keep him company on the lakes and rivers in pursuit of those too often elusive pickerel, trout, bass and pike.

I like to think that Johnny has moved on in spirit to be with his ancestors and that he is casting aside all those struggles we mortals have to deal with. I hope he is now casting a fishing rod with a spiffy trick lure on it into a bubbling brook or rippling lake with the aroma of a campfire burning nearby and the familiar voices of those he loves.

When his family places his ashes on his traditional land in Oshweken he will be among the tall maples, bushes, wildflowers and earth trails he played on as a boy. The same trails he once ran down with childhood friends Jim Bradley, Brian Doolittle and brothers Russ and Ron.

As in the message Johnny worked so hard to pass on to young people in Remembrance Day and Lest We Forget, we will remember him at peace on the rambling wild trails of his childhood just off of Second Line in Six Nations.