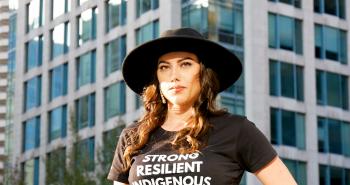 The Virtual Humanity event is set to make its second appearance at Vancouver's Zee Zee Theatre beginning later this month.

Each participant of this session will get a chance to chat with “virtual” humans over Zoom, split into two 20-minute sessions with a pair of storytellers of their choosing. The event’s description states that it is designed to promote “insightful, one-on-one digital conversations” in order to “find common ground in the ideological gaps that divide us.”

Virtual Humanity draws inspiration from the Human Library in-person experience that Zee Zee has hosted over the past nine years, during which participants interact directly with storytellers to challenge their own pre-existing stereotypes in a safe space to have such a dialogue.

Human Library originally began in 2000 in Copenhagen by a collective called ‘Stop the Violence’ and has been replicated worldwide in more than 80 countries.

Alysha Collie, an Indigenous artist from the The’wá:lí (Soowahlie) First Nation with African and settler ancestry is serving as one of the curators for the event.

“It was a project designed to help each other understand our otherness and what makes us unique and also different,” Collie said about Human Library in an interview with Windspeaker.com.

Collie said that Virtual Humanity “really captures the essence of Human Library as it transitions into a virtual format for a second time.

“A lot of folks came to the project having absolutely no idea of what story they wanted to tell or what made them unique, Collie said. “But we saw people develop stories about their lives that might have seemed a bit scary at first, but then they gained a lot of confidence in their story.”

Collie said that working with the storytellers has been a positive experience as the team is workshopping what might work best for the one-on-one format.

“I think we’re dealing with a wide range of what Indigeneity looks like, especially when we are dealing with many different nations. There are many different formats on how to tell a story and not one is one that is wrong, or one that is right,” Collie said. “We, you know, encourage folks that if they have something different that they also want to bring to the table, that is how they want to tell their story, that's okay. And we're here to support them.”

Making Virtual Humanity inclusive was paramount for the event’s organizers.

Dallas Yellowfly, the event’s co-curator, talked about the importance of inclusivity in a news release.

“Inclusiveness is a key element to content now, and hearing from mixed voices and mixed identities is a beautiful shift. We’re seeing way more Indigenous perspectives, worldviews, and ways of knowing. But, IndigiQueer folks prior have been given a lot less space,” Yellowfly said.

Collie said that of the 10 positions she curated, she ensured that at least half of the spaces were occupied by Afro-Indigenous and Black Indigenous folks who are Two Spirit, Indigiqueer or LGBTQ2SI+.

“It was really incredible because I think this is the type of diversity and inclusion that we need to have from projects from the start,” Collie said. “I'm really grateful that Zee Zee Theatre was able to give me this opportunity to reach out to folks and listen to part of my vision about this inclusion.”

Collie said that this edition’s storytellers will be paid $1,000 for their work in this iteration of Virtual Humanity, an increase from the $250 honorarium Zee Zee offered in a prior showing of the event earlier this year.

“As a curator, someone who is reaching out to strangers that I've never met before, over Instagram and other online platforms, it made me feel confident that I was paying our peoples adequately for their time for their stories, and for an opportunity to workshop a bit of themselves to share with the world,” Collie added. “That made me feel really good because I felt like we weren't just asking for free emotional labour.”

Tickets for the event come with a $10 booking fee, with participants invited to pay what they think the experience is worth following their timeslot. Here's the link: https://zeezeetheatre.ca/production/virtual-humanity-two-spirit-indigiqueer-futures/

Collie said there’s a team of about 20 storytellers that are set up for the upcoming event.

“This is a unique group of people,” Collie said of the storytellers. “The stories that are coming out from them so far in our developmental phases of workshopping, these stories are just beyond incredible.”