Elder Nathan Phillips, an Omaha keeper of a sacred pipe and a Vietnam Veteran

“To be honest, I was startled and confused as to why he had approached me.” —Nick Sandmann of Covington Catholic High School

A young man has released a statement explaining his role in an encounter filmed during protests at the Lincoln Memorial in Washington DC that went viral over the weekend.

Nick Sandmann of Covington Catholic High School says it was he in that video that was “confronted” by Elder Nathan Phillips, an Omaha keeper of a sacred pipe and a Vietnam Veteran.

Not the other way around.

After attending the March for Life rally last Friday, a field trip the school sent their students on, Sandmann said the group splintered to do some sightseeing when they encountered “four African American protestors” who were saying “hateful” things to the boys, calling them “white crackers”, “faggots” and “incest kids”.

The boys, said Sandmann, started to yell out school spirit chants as they would do at school sporting events. He denied the report made by Phillips that they were shouting “build that wall”, a chant that has become a rallying cry of President Donald Trump supporters. Many of the boys who were gathered around Phillips and his small group were wearing MAGA red caps (Make America Great Again) in the video, which Trump made popular during his presidential run.

After a few minutes of chanting, said Sandmann, “the Native American protestors, who I hadn’t previously noticed, approached our group.” The youth said Phillips “waded into the crowd.”

Phillips has freely admitted that as he drummed he walked into the middle of what he described as a dangerous situation. It’s at this point the stories of the two men who encountered one another diverge.

Sandmann says the crowd was parting for the drumming Elder as he walked. “I did not see anyone try to block his path,” the youth writes in his statement.

“He locked eyes with me and approached me, coming within inches of my face. He played his drum the entire time he was in my face.

“I never interacted with this protester. I did not speak to him. I did not make any hand gesture or other aggressive moves. To be honest, I was startled and confused as to why he had approached me.”

Phillips has reported the young man blocked his path, and did not move. He said the group of boys had surrounded the Indigenous Vietnam vet and his group, who had attended Washington to do ceremony.

Video shows the group of youths, which has been described as a mob, behaving quite excitedly, laughing, jumping up and down, making gestures and distorted faces and doing the so-called Tomahawk Chop in front of the camera that was recording the unfolding event.

“I never felt like I was blocking the Native American protester,” said Sandmann. “He did not make any attempt to go around me.

“It was clear to me that he had singled me out for a confrontation..”

Phillips said he was scared by the encounter and the angry faces of the crowd closing in around him. He said he was looking for an exit strategy and just wanted to finish his song.

The youth, for his part, said he was worried a situation was “getting out of control where adults were attempting to provoke teenagers.” He said he remained motionless and calm to defuse the situation. He prayed.

Many on social media are commenting that the student’s statement and two hours of other video vindicates Sandmann and the youth group. Others say, no, the full video shows no such thing. While others say the “four African American protestors”, now identified as “Hebrew Israelites”, instigated and inflamed the boys with their insults which led to and perpetuated the chaos.

The school has apologized for the students’ behaviour. The Roman Catholic Diocese of Covington and Covington Catholic High School apologized to Phillips.

Officials said the students’ behavior is opposed to the church’s teachings on the dignity and respect of the human person. Church officials say they are investigating and will take appropriate action, up to and including expulsion. 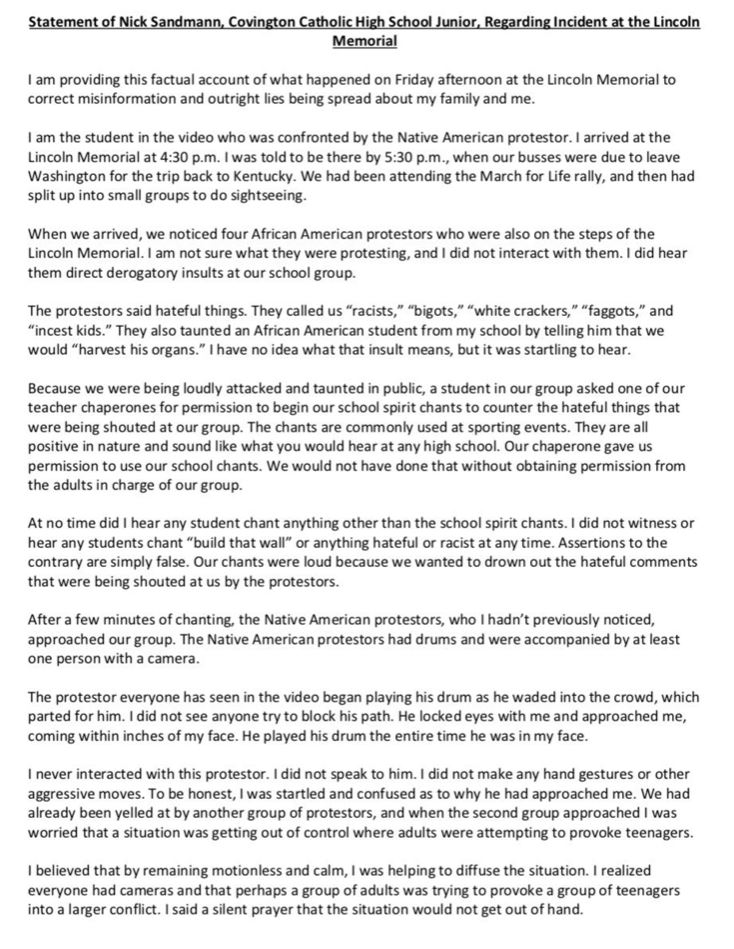 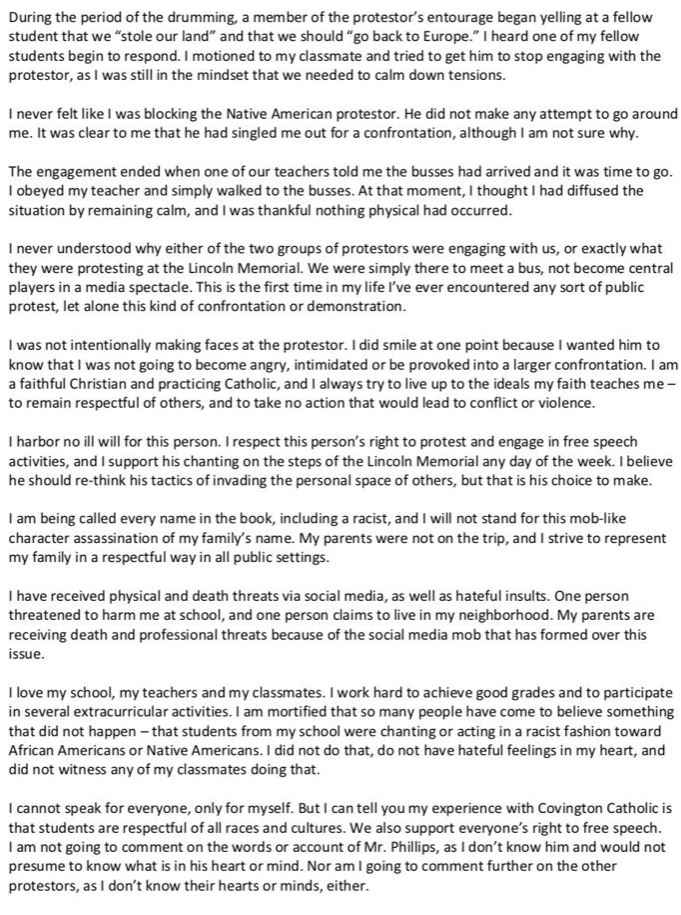