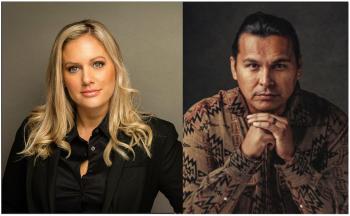 Officials with the National Aboriginal Trust Officers Association (NATOA) are keen to get their message out.

Their inaugural Indigenous Youth Virtual Summit, a three-day event titled Developing Tools For Success, will be staged Oct. 6 to Oct. 8 and it is free.

Presentations at the summit will includes financial literacy, entrepreneurship and mental health.

The event is designed for Indigenous people across Canada between the ages of 16 and 35, and will feature a Q&A with actor Adam Beach.

When registration for the summit opened this past March, organizers were charging a fee of $75 to attend. But NATOA officials have since decided to change the registration and make it a free event for all delegates.

Michele Young-Crook, NATOA’s president and CEO, said she was hearing reports individuals were keen to attend, but the registration fee was proving difficult.

“The biggest obstacle was the funding,” Young-Crook said. “They just didn’t have the money. Especially with the pandemic now, even though it may be $75, some people didn’t have that in their budget.”

Organizers have seen their sign-up numbers jump dramatically in recent weeks since it became a free event.

About 250 people have registered now. Young-Crook believes the number could inch closer to 300 by next week when the summit will be staged.

Since it is an online event, there is no limit on the number of summit attendees.

NATOA’s office is based in Hagersville, Ont., near the Six Nations community of Ohsweken.

Though there are some individuals from Ontario who have signed up for its youth summit, the majority are from either British Columbia or Alberta.

Young-Crook believes that’s because those two provinces have more Indigenous youth, who are living near large urban centres that also have colleges and universities.

Young-Crook said her association, which has been around for 14 years and became a registered charity in 2014, has staged a number of events in the past. Some of those have been aimed at those who have become trustees, councillors or chiefs in their communities.

But NATOA officials were keen to offer presentations to younger individuals as well.

“We wanted to give them the same tools as others,” Young-Crook said.

The agenda for the opening day of the summit, Oct. 6, will focus on mental health.

Following a welcome introduction, there will be trained and certified youth speakers sharing personal stories and other mental health information to both educate and inspire young people to look out for themselves and their peers.

Opening day will also include self-care and social media workshops and the session with Beach.

The summit’s final day will focus on entrepreneurship.

The opening presentation will be on developing a good business plan. Other presentations explore branding a business and self, as well as bookkeeping.

And there will also be a presentation on taxation, both on and off reserve. This will include information on GST remittance and filing taxes.

Besides gearing up for next week’s summit, NATOA officials are preparing an online toolkit, which will be available next year.

It will be accessible to everybody and free of charge.

“We’re hoping to have it launched by March 30,” Young-Crook said.

The platform is expected to be unique since it will include information on how Indigenous youth can succeed through topics covering financial literacy, entrepreneurship and mental health.

NATOA will be partnering with professionals from all three of these fields to provide information.

Young-Crook said there are other platforms out there now that specifically deal with these issues. But NATOA’s toolkit will bring them all together into one spot.

“We’ll be the one who combines all of that for them,” Young-Crook said.

More information on the Developing Tools For Success summit is available at https://natoa.ca/