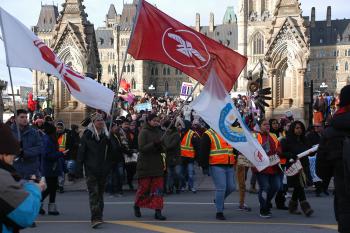 Youth rally on the streets of Ottawa protests against the Indigenous Recognition and Implementation of Rights Framework. Photos by Brett Forester. 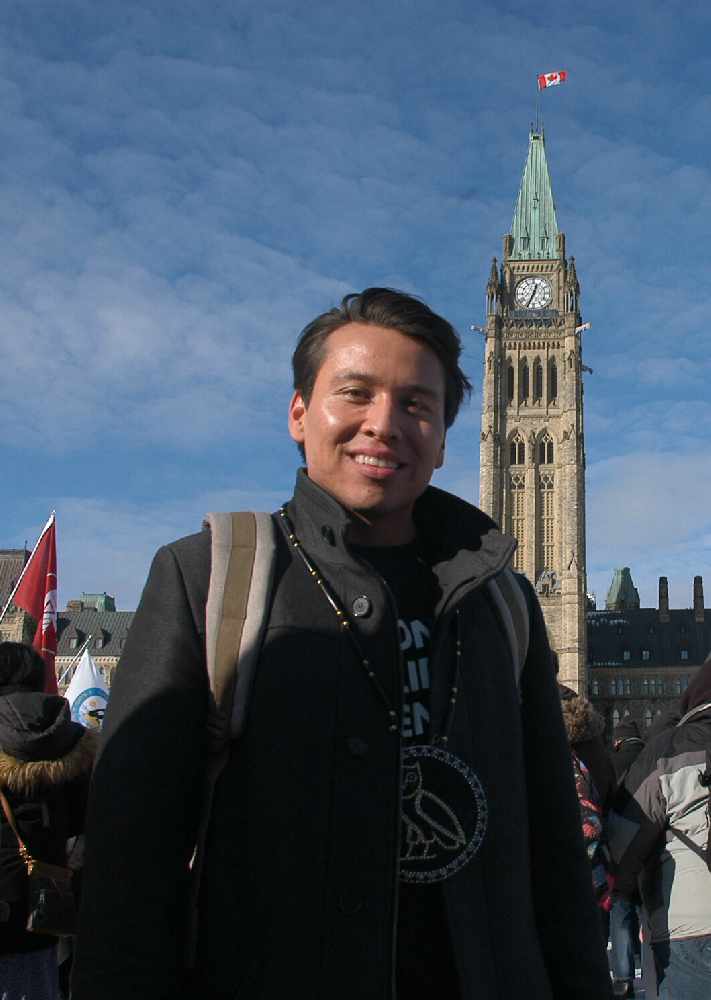 The temperature hovered around minus-5 degrees Celsius, but the sun shone through the cloud cover. Biting wind made it feel much colder this afternoon as demonstrators gathered on the snowy terrace of Parliament Hill’s East Lawn to express their dissatisfaction with the Trudeau government’s proposed Indigenous Recognition and Implementation of Rights Framework.

Indigenous youth, chiefs, Elders, and community leaders came by bus and car from across Ontario and outside the province at the

invitation of the Association of Iroquois and Allied Indians (AIAI), whose Youth Council organized the event.

The Trudeau government announced the Framework in February. They stated the framework will work to renew the relationship between Canada and Indigenous people, as well as recognize and implement First Nation inherent rights. The government intended to conduct national engagement activities “in full partnership with First Nations, Inuit, and Métis peoples” with the goal of introducing the Framework in 2018, implementing it by October 2019.

However, many of the rally’s participants expressed dissatisfaction with the manner in which these engagements have taken place, as well as incredulity that something so monumental could be implemented properly in such a short time frame.

Policy advisor Russ Diabo, in his speech to the group, defined the Framework in broad terms as the entire Canadian bureaucratic apparatus which operates without the consent or inclusion of Indigenous nations regarding decisions which impact them, including dissolving the former department of Indian Affairs into two new departments.

“We offered peace and friendship. We gave them our wampum belts representing that relationship, and what they’re demanding from us is extermination,” he said. “Give up our rights. Lose all our land. And that’s what this Framework is about.”

Mark Hill, a member of the Ontario First Nations Young Peoples Council and the AFN National Youth Council, came from Six Nations of the Grand River to deliver a speech at the demonstration. He said he wasn’t opposed to what the government wanted to accomplish, but rather the way they were going about it.

“It’s not a one-size fits all thing, and I think that’s what the government has been doing, putting us all under one umbrella. It’s not going to benefit us, in no way whatsoever. We’ve got to continue to come together and be united and really look to the young people to help lead our way.” 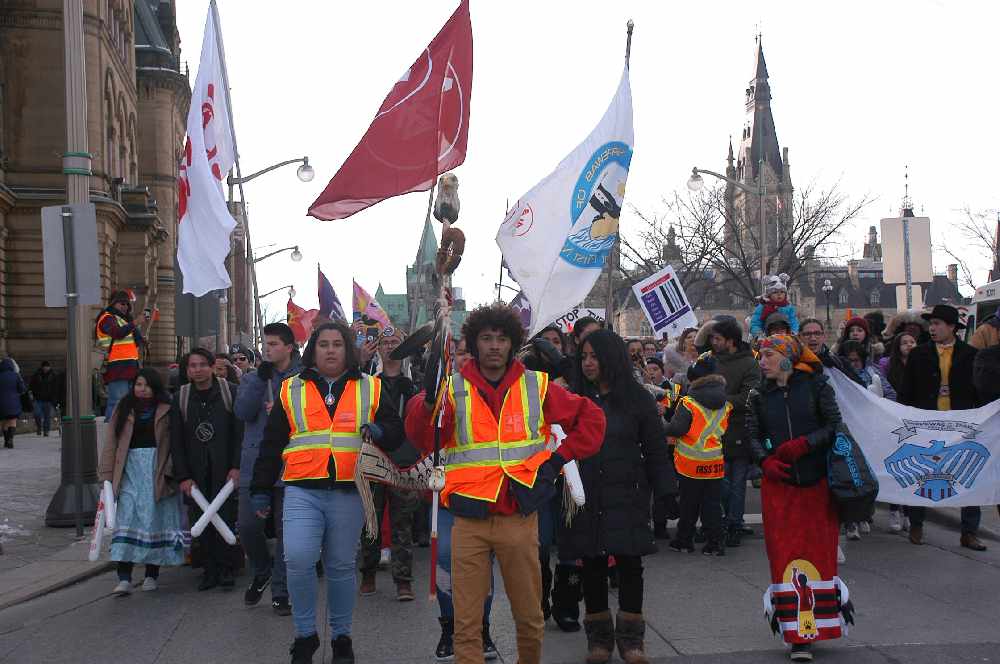 Just as the rally was getting underway at 11 a.m., federal Minister of Crown–Indigenous Relations, Carolyn Bennett, addressed the AFN Special Assembly just a short walk away at the Westin Hotel. She said she understood concerns First Nations have with the Framework.

“All our elements of a suite of legislation will become part of our commitment to changing the relationship. Today, I want you to know that we have clearly heard you. That you want more time and more deep engagement before legislation is developed that speaks to your inherent and treaty rights and reconstituting nations.”

Just prior to 1 p.m., the speeches at the rally ended and the demonstrators, along with a police escort, marched the short distance down to the AFN assembly at the Westin.

In a symbolic gesture, the march stopped momentarily outside the Office of the Prime Minister and Privy Council. Participants blocked traffic at the corner of Elgin and Wellington, before continuing past the National War Memorial. Demonstrators sang, danced, and played the drum, while chanting “Stop the Framework”, “Treaty Strong,” and “We do not Consent!”

The atmosphere took a quick change when they reached the Westin. The front entrance to the hotel was barred by police, as well as hotel officials. The protesters were under the impression they were to be admitted. However, hotel officials declared that only those who had registered and payed a registration fee would be let in. While those who had registered for the AFN assembly were admitted without delay, many were left out in the wind and cold. 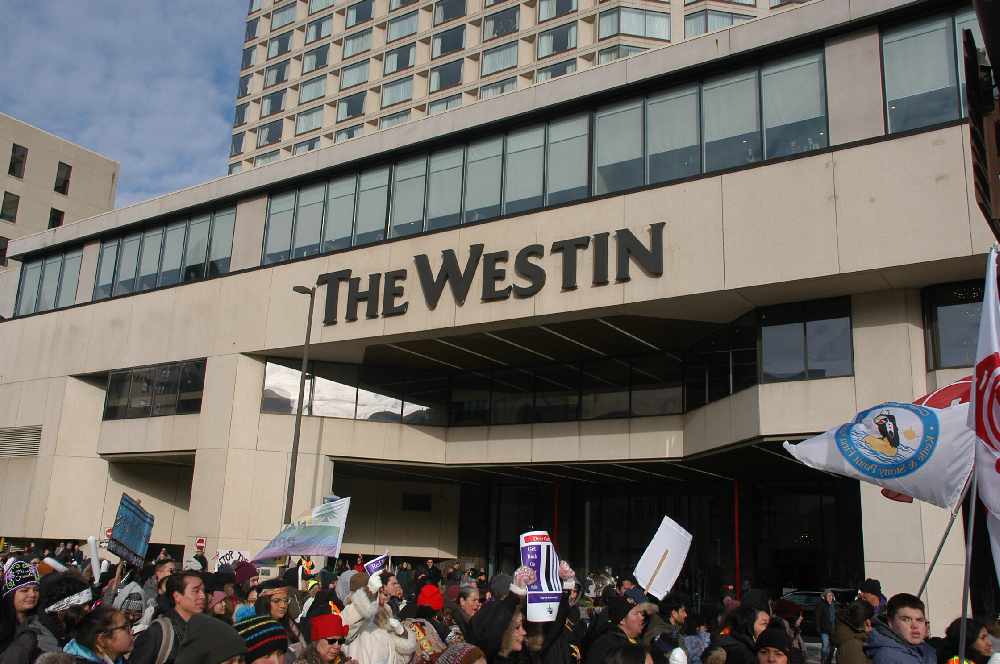 Chiefs began working on a special resolution to waive registration and fees so that all the youth demonstrators could enter. Nevertheless, 30 minutes passed and the crowd began to dwindle to roughly 50 members. Directly inside the Westin lobby, those who had entered played another song. At this point some protestors became restless. Some suggested finding an alternate way in, while others began casting aspersions on the AFN for not allowing them inside, chanting “Shame on AFN! Shame! Shame!” Still others starting arguing with police constables blocking the door. 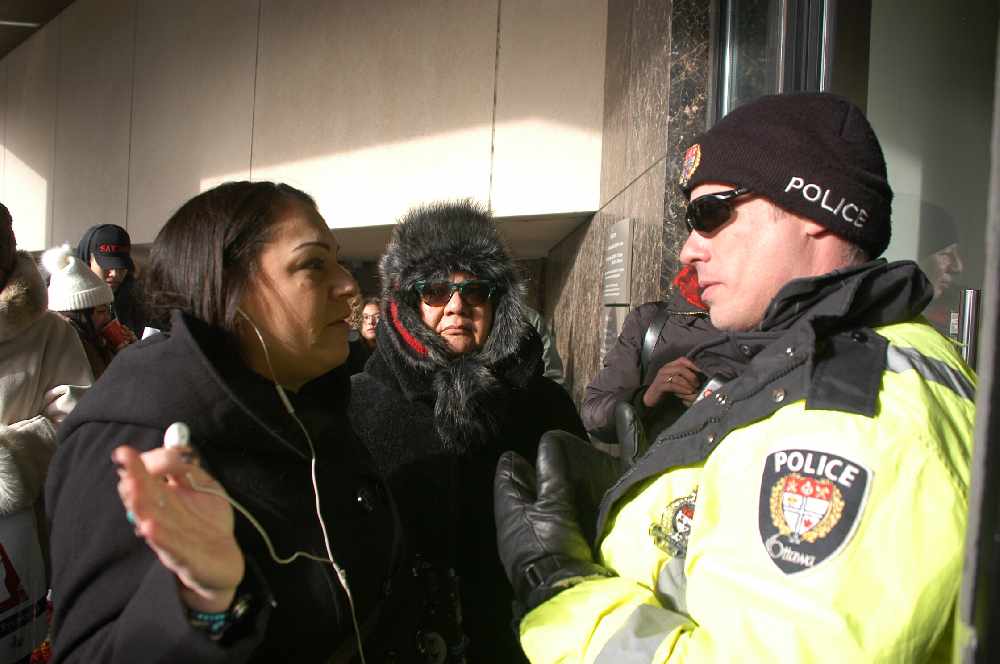 Not long after, however, Batchewana First Nation Chief Dean Sayers, who earlier gave a speech on Parliament Hill, emerged from the warm hotel with news that they’d passed a resolution allowing all, registered or not, entrance to the assembly.

“I went right to the mic,” said Sayers, “and asked to have special considerations, and moved for a resolution that waived any fees and removed any barriers, so our people could come in and participate in and witness the discussion that was happening regarding the Indigenous Rights Framework. The chief of Nipissing stood up and supported me and seconded the resolution.”

“They understand,” he said, referring to the AFN. “The National Chief supports this too… It’s not fair to inhibit our people any further here. I went to the floor and the chiefs applauded, the room applauded. Hopefully there’s no more contrary messaging. As chiefs, our people are welcome.” 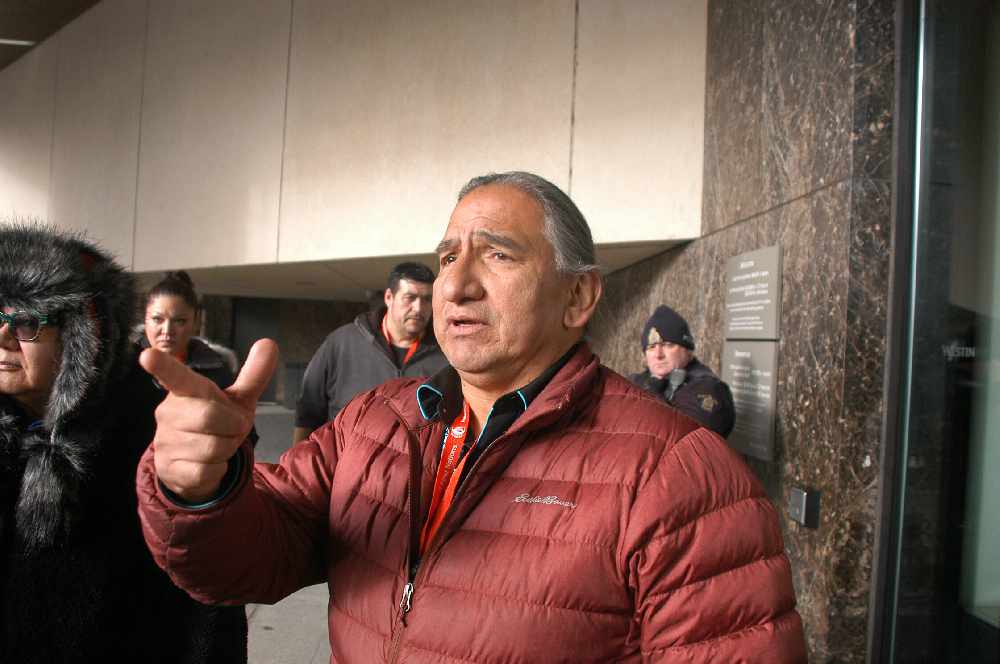 Finally, the youth demonstrators along with AIAI Deputy Grand Chief Gordon Peters ascended in solidarity to the Special Assembly conference room. There they made their way to the front of the room where they played one more song on the drum as National Chief Perry Bellegarde looked on.