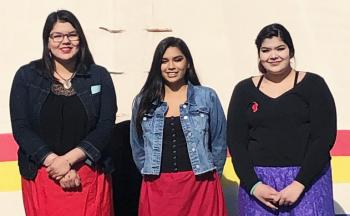 Participants in “Our Voices”: (from left) Amy Esquash, Kirstyn Kennedy, and Brandi McKay.

“I see a lot of posts on social media about new people going missing all the time and I feel that something needs to be done about it and we need to spread that awareness to others and help them be safe.” —Kirstyn Kennedy
By Shari Narine
Windspeaker.com Contributor

Amy Esquash is the mother of a little girl about to turn one. She plans to teach her daughter about being aware of her surroundings and looking out for her friends all the while hoping that by the time her daughter is old enough to be out on her own, murdered and missing Indigenous women and girls won’t be the issue it is today.

“In a couple of years, maybe this won’t be as big of a problem, but maybe it will be. We just have to hope and expect for the best,” she said.

Esquash, 19 and in Grade 12 at Yorkton Regional High School, is among a group of youth who worked with the Yorkton Tribal Council’s Engaging Young Leaders program to produce an almost 11-minute video. It is geared towards young people her age and younger to raise awareness about not becoming one of the many murdered and missing Indigenous women and girls.

Funding for the video came through Health Canada. Then YTC reached out to its youth through the leadership program, which is run by YTC’s Justice Unit and Health and Social Development in partnership with Yorkton area’s Big Brothers Big Sisters.

“I’m very proud of them. I went to the youth with it, said ‘we’re going to do a video, but it’s all on you guys’,” said Margo Brass, one of the YTC mentors.

The Engaging Young Leaders program has about 30 participants from eight different high schools, both First Nations and urban in the Yorkton area.

They were split into four groups and developed their concepts for the video, focusing on common situations that young people often find themselves in. They practised and shot their scenes all on the same day. Brass took the draft video to the schools in the area looking for student feedback, which led to minor changes such as a red font for writing, inclusion of music, and including the names of the students involved in the opening credits.

“Our Voices,” tagged as “a practical video for prevention created by youth,” was launched on May 1.

For Kirstyn Kennedy, 18, also a Grade 12 student at Yorkton Regional High School, doing the video was something that took her well beyond her comfort zone, but it was a topic she was passionate about.

“Currently it’s a really big issue right now. I see a lot of posts on social media about new people going missing all the time and I feel that something needs to be done about it and we need to spread that awareness to others and help them be safe,” she said.

“A lot of the cases are still unsolved and these families and these people, they deserve justice. It doesn’t seem like there’s too much being done about it. There is, but I just feel there’s not enough and we still need to do more,” she said.

Brandi McKay, 16, a Grade 10 student at Yorkton Regional High School, admits that while she talks to her friends about being vigilant, it’s hard to work around that mindset that most young people have of being invincible.

The girls hope that by presenting scenarios common to other teens – like meeting an on-line date for the first time, going to a house party, being aware of your surroundings, walking home in pairs, simple defensive strategies like holding your keys as a weapon—that their peers will listen.

While much of the video’s message is geared towards young women that doesn’t mean that boys and men aren’t accountable for their actions.

“Young men need to understand that women are sacred. A long time ago, women were sacred to the community and villages and they were seen as the powerful one. Now it’s up to men to protect and not abuse what we have,” said Esquash.

Kennedy says the hope is that the video is shared often. She says the plan is to show it at different high schools and elementary schools in the Yorkton area.

McKay says the video has received positive feedback and she is pleased that youth are seeing it as having their voices heard.

“Our Voices” was screened this past Monday as part of Saskatchewan’s Missing Person Week, and the three young women were involved in marking the occasion.

Brass says when the video is presented the plan is to follow it up with a question-and-answer period. The goal is to show “Our Voices” as often as possible before the end of the school year, as well as to encourage YTC staff to show it. The video will also be posted on social media.

“I hope that it does reach a lot of youth, because it’s a video that the youth made for other youth. A lot of youth don’t listen to the adults (but) if they share from the other youth, maybe they’ll go with it,” Brass said.

The video can be seen at