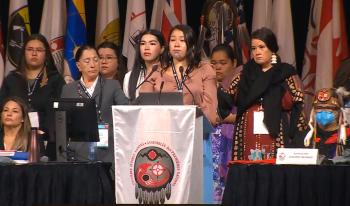 “If you want to gauge the outcomes of your leadership then you should look to our children, their quality of life, to gauge the ability to make things better for our people.” — Rosalie LaBillois, co-chair of the Assembly of First Nations Youth Council
By Shari Narine
Local Journalism Initiative Reporter
Windspeaker.com

Rosalie LaBillois of Eel River Bar First Nation, N.B., co-chair of the Assembly of First Nations Youth Council, admonished AFN leadership this morning for putting the “drama of the day” yesterday, the first day of the AFN’s annual general assembly, in front of showing support for the family of a missing five-year-old boy, Frank Young.

“Each and everyone of you had the opportunity to support the family of a child that has gone missing. And when our youth council had seen a room of empty chairs to support them, our hearts were broken,” said LaBillois, struggling through tears.

Frank Young of Red Earth Cree Nation in Saskatchewan went missing on April 19. Multiple searches for the child have been unsuccessful.

At the end of a tumultuous first day of the AFN AGA July 5, a blanket dance was held to support the Young family to continue their search. The boy’s grandmother, Teresa Whitecap, pleaded through tears with the chiefs to pray for the family. She said she came to the AFN assembly with a heavy heart, because her grandson, little Frank, is still missing.

“I ask our Creator to lead us to where Frank is,” she said.

Overtaking the AFN agenda was the “drama” surrounding the suspension of National Chief RoseAnne Archibald. Regional chiefs spoke in favour of upholding a suspension they had declared June 17, while Archibald and her supporters spoke against the suspension. By the end of the day, a resolution to suspend Archibald had been defeated.

The events that took over the day, said LaBillois, took the focus away from the most important issue, that of the children.

“Every time you decide to squabble amongst yourselves you forget the children and young people that you once swore to protect,” she said.

LaBillois said a “cold, hard look” at First Nations communities would show children are still being taken away by provincial children’s services agencies; that funding for children’s services still remains underfunded; and suicide rates continue to be high.

“For the love of our Creator and for the love of our future as a people, I plead to each and everyone of you, to think about these things,” she said. “What is our world going to look like without our children?”

LaBillois chastised chiefs for allowing their “political ambitions …(to) have taken the attention away from matters, which we proclaim to matter the most to us … our children,” She accused leaders of exploiting First Nations children for political gains.

She said the youth council was left alone to “defend itself” in an uncertain time. She pleaded with the assembly to think about the children who didn’t have a voice to defend themselves.

“Drama created from poor leadership … (was) displayed across the country in media. The wellness of our people must always be at the forefront of our decision-making. And if you want to gauge the outcomes of your leadership then you should look to our children, their quality of life, to gauge the ability to make things better for our people,” LaBillois said.

LaBillois is in her fourth term on the youth council.

Frank Young was last seen outside his home on the Red Earth Cree Nation, 300 kilometres northeast of Saskatoon, on the afternoon of April 19. He was wearing Paw Patrol rubber boots, blue and green dinosaur pyjamas and a blue windbreaker. Anyone with any information on the whereabouts of Frank Young is asked to call the Carrot River RCMP at 306-768-1200 or 911.

During the afternoon session July 6 at the AFN aga, Shoal Lake Cree Nation Chief Marcel Head announced that $13,000 had been raised by chiefs to support the search for Little Frank, with more to come as chiefs continued to reach out to the family.

The money will be used to help searchers, including the repair of equipment like all-terrain vehicles, which are being used to search the swamp, he said.

Head also recognized the AFN youth council, which spoke in the morning to support the Frank Young family.

“We do have a heavy schedule as chiefs. We do understand that, but when something like this is a matter of importance, we’d like to at least have your presence when we do things like this,” said Head.