Young people to have their say at the Tee Pee Summit 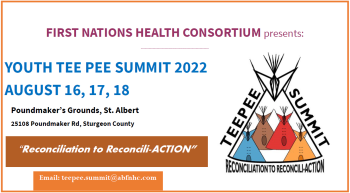 “We are providing a platform for the youth, to talk about what they want to see in their future.” —Keri Cardinal
By Crystal St.Pierre
Local Journalism Initiative Reporter
Windspeaker.com

Youth from across Alberta are being provided with the opportunity to voice their concerns on a number of topics during the 2022 Tee Pee Summit being held Aug. 16 to Aug. 18 at Poundmaker’s Lodge in St. Albert, Alta.

“We are providing a platform for the youth, to talk about what they want to see in their future…that will make things better for them,” said Keri Cardinal, event organizer from the First Nation Health Consortium (FNHC).

The FNHC is an organization that was established in February 2017, a result of a partnership between health organizations in the treaties 6, 7 and 8 within Alberta.

Together they focus on children and families providing Indigenous children both on and off reserve with access to suitable services to maintain their health, both physically and mentally.

The Tee Pee Summit is a platform for the FNHC to hear directly from youth ages 17 to 25 about what areas they would like to see improvement in. This will include sports and recreation, arts and culture, jobs and careers, racism, family and bullying.

“What we are doing is we’re kind of basing it on a calls to action. ‘Reconciliation to Reconcili-Action’ is our theme and we are hoping to come out with a number of calls to action from the youth to their communities, their government, to their allies,” said Cardinal.

Included in the three-day event are several presentations by well-known Indigenous individuals, including Lance Cardinal, who is an artist, designer and entrepreneur.

“I think a lot of times art is overlooked and there are so many youth in communities who seek out art as a form of therapy… We knew the energy he has will be so good for the youth,” said Morgan Reynolds, planner and co-ordinator of the event.
Brigette Lacquette, who is a 2018 Olympic Winter Games silver medalist in hockey, will discuss the racism she felt and the financial burden on her family in order for her to follow her dreams.

“You can come from the most isolated town and community and still be a part of Team Canada” is her message to all youth.

Amazing Race Season 7 winners Anthony Johnson and Dr. James Makokis will discuss their achievements and the hardships they have faced as a two-spirit couple.

Waneek Horn-Miller, an Olympic water polo medalist, will tell the story about her involvement in bridging the gap and repairing relationships between Indigenous and non-Indigenous people.

“We wanted people who these youth can relate to, who come from the rez, who have a story, who can be motivating,” said Reynolds.

“We reached out to a handful of people who we thought would be really good and be inspiring. I think we have a really good range of speakers who are going to hit the different topics and themes that we envisioned the Tee Pee Summit looking like.”

Following each speaker, attendees will go into breakout groups where they will discuss the various issues highlighted in the presentation and how they would like to see those issues addressed within their community and by their government.

“In our breakout sessions we are going to be focusing on getting that information from the participants regarding, ‘What did you hear from today that is an issue and what are some of the things we can do in the future to address those issues’,” said Cardinal.

“That is kind of what the theme is for each motivational speaker, is going to be these breakout sessions where we are asking for solution-focused ideas to any issues that were addressed.”

All of the ideas and solutions that are brought forward during the breakout sessions will then be used to create the calls to action lists for the community.

The free event is open to anyone who wishes to attend, Indigenous or not. There is free camping onsite, however, there isn’t any electrical hook ups or running water.

Poundmaker’s Lodge donated the property free of charge for the event.