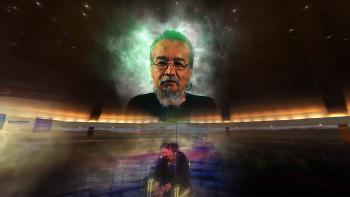 A still from the Virtual Reality experience titled This Is Not A Ceremony which will be shown at the Sundance Film Festival. Photo courtesy of the National Film Board of Canada (NFB).

“As a filmmaker it’s been a lifelong dream to go to Sundance.” — Colin Van Loon
By Sam Laskaris
Local Journalism Initiative Reporter
Windspeaker.com

A First Nations filmmaker can now cross off a major accomplishment on his bucket list.

Colin Van Loon, a member of Piikani Nation in Alberta, whose traditional name is Ahnahktsipiitaa, is the writer/director of This Is Not A Ceremony, a cinematic VR (Virtual Reality) experience which is being shown at the world-renowned Utah-based Sundance Film Festival.

This year’s festival, which begins today (Jan. 20) and continues until Jan. 30, is being staged virtually this year because of the ongoing COVID-19 pandemic.

“As a filmmaker it’s been a lifelong dream to go to Sundance,” said Van Loon, who now lives on Westbank First Nation in British Columbia.

This Is Not A Ceremony, a National Film Board of Canada production, is having its world premiere at the Utah festival. It is one of 15 projects being shown as part of the festival’s New Frontier program.

This marks the 16th year Sundance has included its New Frontier program, which consists of VR, multimedia and emerging tech creative projects.

This Is Not A Ceremony is a 20-minute, 360-degree interactive documentary. It can only be seen with an Oculus Quest 1 or 2 VR headset.

Van Loon would have preferred to be taking in the Sundance festival experience in person. Yet he’s still thrilled to be a part of the festival, which was founded in 1978 and has become the largest independent film festival in the United States.

Though This Is Not A Ceremony will be available globally to those with the proper headset throughout the Sundance festival, Van Loon is especially looking forward to Friday, Jan. 21.

That’s because he will be the New Frontier spotlighted artist.

“We have what is ultimately a pre-recorded talk,” he said. “We spent a day on the platform (on Tuesday). It was nice to be able to have conversations with people.”

This Is Not A Ceremony is about two of the darker moments for Indigenous people in Canada.

The first story shared in Van Loon’s project is about his cousin Adam North Peigan, a victim of the Sixties Scoop who is now president of the Legacy of Hope Foundation.

And the next story is about Brian Sinclair, an Indigenous man whose death in 2008 in a Winnipeg hospital led to an awareness about the racism in Canada’s healthcare system.

Rigor mortis had set in before hospital staff attended to Sinclair, who waited 34 hours in a waiting room for medical attention.

Van Loon’s project has been several years in the making. He first pitched his idea at the imagineNATIVE Film + Media Arts Festival in Toronto in 2017.

For his efforts and for the fact his concept was selected as the best idea presented, Van Loon was awarded $50,000 to develop his project.

Plenty of work and research ensued in the next couple of years for the project, originally titled Walk A Mile In My Moccasins.

“But that title was never meant to stay,” he said.

The facility is still utilized as a functioning hospital but is also often used in movie sets.

Some of the footage for the North Peigan portion of the project was filmed in Brocket, Alta., Piikani Nation’s main community, during a local powwow.

“We were very lucky,” Van Loon said. “Unbeknownst to us and Adam at the time, the Nation decided to do an honour dance for him. We were really lucky to capture that.”

Van Loon continued to work on his project, as sound effects were added throughout 2021.

Only a rough draft of This Is Not A Ceremony had been submitted to Sundance officials when they decided to include the project in the 2022 schedule.

“We were working on our sound up until Dec. 20,” Van Loon said, adding that’s the day his project was deemed complete.

He’s hoping This Is Not A Ceremony will also be featured at other major festivals throughout the world this year.

“I hope to go to a number of festivals that have a footprint in AR (Augmented Reality) and VR,” Van Loon said.

“I hope people will take some of the responsibility of being a witness,” he said of the message he’s hoping viewers will take away from his project.

Van Loon said while conducting the majority of his work, his main thoughts are with Indigenous people.

“I hope people will see the resiliency of Adam and Robert,” he said. “I think they are very strong in the work they are doing.”