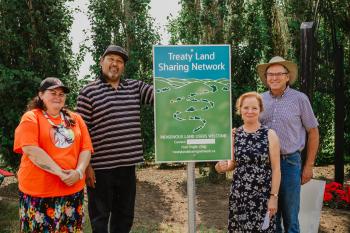 “Our opportunity to move forward in a good way with Indigenous people in this country will take a lot of careful thought, careful communicating and careful decision-making.” — Mary Smillie
By Shari Narine
Local Journalism Initiative Reporter
Windspeaker.com

As the province of Saskatchewan verges on making land less accessible to Indigenous hunters and gatherers through pending trespassing legislation, a group of farmers and ranchers are acting as a “counterpoint.”

He admits, however, he wonders what the catch is even though he was part of the launch event July 15 for the new Treaty Land Sharing Network (TLSN).

TLSN is a grassroots group made up of farmers and ranchers who have joined to share land that they farm. They actively welcome First Nations and Métis people to practice their way of life on that land. They have not gone through any formal steps with any Indigenous organization in the province. They are making their intentions known through the July 15 launch and a website.

Land within the network can be accessed for gathering plants and medicines, hunting, holding ceremony, and other uses.

“I can’t figure it out. I tried. Yesterday I was at the launch and I was still trying to figure out. There must be an angle… because I grew up in Saskatchewan,” said Desjarlais, who has been a bow hunter for the past 20 years and raised his four children on wild meat.

“When we access our game and our roots in the province of Saskatchewan we are accustomed to game wardens being called, being accosted, farmers to kick us off their land,” he said.

Even now, the provincial government is working to proclaim the tougher trespassing law it passed in 2019, which puts the onus on hunters and others to obtain permission from the landholder before going on private land.

“It reduces our land, where we can access our food, our inherent rights. Because even now, today, the Saskatchewan government is fencing in wildlife lands at an alarming rate and that’s making our lands smaller and smaller that we can hunt on or practise our inherent rights,” said Desjarlais.

So for about a dozen landholders to give permission to use their land has Desjarlais’ head spinning.

It’s a reaction that Mary Smillie understands. She, along with husband Ian McCreary, hosted the launch event at their farm in Bladworth.

“I think we have to earn Indigenous peoples’ trust. I think (Desjarlais’) wariness is well-founded,” said Smillie.

In 2018, a group of women started talking about the need for landholders to better understand their responsibilities as settlers and the concept of honouring treaty rights by offering their land in the manner intended by treaties.

That it took three years for TLSN to be concretely realized is not a surprise to Smillie either “because changing culture is hard.”

“It’s a careful conversation (and)… what we need to do is change our habits of thinking, our habits of communicating and our habits of decision-making on all kinds of levels in order to make reconciliation work,” she said.

Smilie says TSLN’s action was “set out to offer as a counterpoint (to Saskatchewan’s trespassing law), an opportunity for a different way forward.”

Smillie doesn’t believe that the colonial views held by many Saskatchewan settlers are unique.

“I think systemic racism is by its nature is systemic and is (held) throughout the population in Canada,” she said.

However, since the July 15 event, farmers and ranchers in Saskatchewan have expressed interest in the endeavour.

Right now, says Smillie, the land available, which is marked with signs, is in the Treaty 4 and 6 areas, the largest of five treaty areas in the province. These are also the treaty areas with the most agricultural land.

A directory of land accessible through the network is now online on the group’s website treatylandsharingnetwork.ca. Protocols set out require the landholder to be contacted before the initial visit; access by foot only; gates and fences left as found; and no open fires.

Smillie says TSLN has also heard from people in Alberta, Manitoba and Ontario who are interested in learning more.

“It is an elegantly simple idea and that's not to take away from the fact that it's going to be hard to do it in practice. As Justice Murray Sinclair (chair of the Truth and Reconciliation Commission) said, truth is difficult, reconciliation is going to be harder. That doesn't mean we don't try,” she said.

“I’m hoping in the future it will double and get more and more farmers on board. It’ll be good for my kids and their kids in the future,” said Desjarlais.