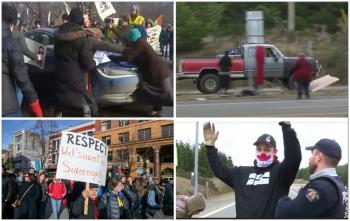 Violence on the solidarity line.

“I think for non-Indigenous people, before they start to blame the Indigenous protestors for the inconvenience they may cause, they should sit back and ask the question as to why it has gotten to this and what’s wrong with our political system.” — Bruce McIvor of First Peoples Law
By Shari Narine
Windspeaker.Com Contributor

As solidarity demonstrations sprang up across the country in support of the land defenders of Wet’suwet’en territory, so did concerns of the potential of violence against the participants.

Incidences of such violence were posted on social media. In Regina, more than 100 Wet’suwet’en supporters gathered on the Albert Street Bridge on Feb. 8 blocking traffic both ways. One vehicle plowed through the demonstrators. A day later on Vancouver Island, barricades set up by Wet’suwet’en supporters on Highway 19 near Courtenay were dismantled by angry masked people, and a pick-up truck drove through one of the barricades right next to the demonstrators.

No matter how frustrated people are by their lives being inconvenienced, reactions like this cannot be condoned, says legal counsel Bruce McIvor of First Peoples Law, a firm that defends and advances Indigenous title and rights and treaty rights.

“That’s really sad to see that, because obviously they don’t understand what these important constitutional and political social issues are,” he said.

Katie Perfitt is part of a group of Indigenous youth and allies who have been occupying the Ministry of Justice building in Ottawa after the forced removal of Wet’suwet’en people from their own lands by RCMP for the construction of a pipeline.

Six people were arrested at a Wet’suwet’en checkpoint camp on Feb. 6 and arrests continued on Feb. 10, when seven more people were removed into custody, including Unist’ot’en matriarchs Freda Huson (Chief Howihkat), Brenda Michell (Chief Geltiy), and Dr. Karla Tait. They matriarchs were released the same day.

They dispute the path of the pipeline through their pristine homelands and sensitive cultural sites. They erected camps in the path of the Coastal GasLink natural gas pipeline in opposition to the development. The RCMP were acting on a court injunction to remove the camps and those people in them.

“The actions of the police, the RCMP, definitely embolden people who don’t have an understanding or respect for Indigenous rights,” said Perfitt. Her group has been calling on Justice Minister and Attorney General David Lametti “to stop the human and Indigenous rights violations happening in Wet’suwet’en territory at the hands of the RCMP.”

Civil disobedience, according to the BC Civil Liberties Association (BCCLA), is breaking the law in order to “convince the government … to do or stop doing something … (or) draw attention to an issue or cause.”

“I understand the frustration of a lot of Indigenous people,” said McIvor, “and to a large extent it’s a frustration and an indication of a political system that has failed them that results in those kinds of protests. I think for non-Indigenous people, before they start to blame the Indigenous protestors for the inconvenience they may cause, they should sit back and ask the question as to why it has gotten to this and what’s wrong with our political system.”

Civil disobedience is further defined by being non-violent towards people or property.

Perfitt says participants in the Justice building action were made aware that this was “a peaceful occupation” and no weapons were allowed.

“And I would say, the spirit they’re bringing to it is not that they’re protestors, but that they’re occupying and holding ceremonies. Through ceremony in the space here in Ottawa it has really grounded everyone and it makes sure people don’t feel escalated,” she said.

However, admits Perfitt, even if their intention is for the occupation to remain peaceful, participants have been made aware of the risks and possibilities that more can happen.

“We have legal counsel we’re consulting (with) about actions we are taking,” she said.

According to the BCCLA Arrest Handbook, “Organizers should ensure activists doing civil disobedience are prepared and trained for potential consequences, including tear gas, pepper spray and time in jail. Although civil disobedience may result in absolute or conditional discharge…activists should also be adequately prepared for the social consequence of a criminal record.”

While legal implications are one thing, the physical response by non-supporters speaks to the larger issue, says Perfitt.

“There is a reason why people are getting frustrated and don’t understand the issue. It’s embedded in our education system. We are not taught about the rights and sovereignty of our Indigenous people,” she said.

Conversations need to happen, she said.

“What’s taken place last week at Wet’suwet’en … has instigated a conversation across the country and it’s not a comfortable conversation. But it’s a conversation that people need to have. While you do have some people who react in a dismissive way, you get a lot more people who are really willing to sit down and ask the tough questions and become part of the conversation. I see a lot of that happening,” he said.

McIvor believes that the violent and physical reaction to protestors has had an impact on non-Indigenous Canadians.

“I think there are a lot of non-Indigenous people who are being shaken out of their complacency and looking in the mirror that reflects the national identity and saying, ‘You know what? I don’t like what I see,’” he said.

McIvor believes that these across-the-country protests are the result of a government inaction.

“Politicians are more likely to have the easier discussions, but when it comes to a discussion about who actually owns this land, who gets to make the decisions about the land…they won’t have that conversation,” he said.

“It’s really important for the people who support what’s happening in Wet’suwet’en and across the country to be, especially non-Indigenous folks, to be talking to their friends and family and making sense of and clearly communicating what’s going on, what’s at stake and the importance of the Canadian government respecting the rights of Indigenous people in this country,” she said.