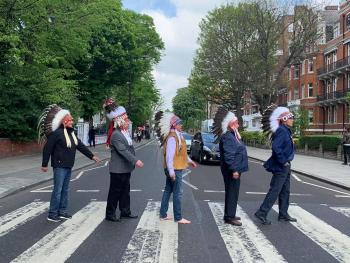 "Our research shows that a third of international visitors to Canada are requesting ways to experience Indigenous culture. WestJet is literally opening up new airways for us into these important markets." — Keith Henry, president of the Indigenous Tourism Association of Canada
By Shari Narine
Windspeaker.com Contributor

Londoners who were at Abbey Road at the right time last week were witnesses to a First Nations’ version of the Beatles’ famous 1969 album cover.

“I think everyone was in awe. They were excited to see the headdresses,” said Hal Eagletail, who had the idea to re-enact the legendary crossing at the busy intersection.

Forty members of an Indigenous delegation were invited to take a trip to London April 28 to May 2 by WestJet on the company’s inaugural run of its Boeing 787-9 Dreamliner. Eagletail, a member of the Tsuut’ina Nation and a director with Indigenous Tourism Alberta, the chiefs, representatives from the Treaty 7 nations, Metis Nation of Alberta Region 3 (Calgary-area) and five Indigenous tourism business owners and operators were among the travellers.

The trip was about a year in the making, said Eagletail.

He credits WestJet’s new CEO Edward Sims for initiating the process. Sims, who came to WestJet from Air New Zealand, which has a strong Aboriginal component, approached Assembly of First Nations National Chief Perry Bellegarde for input. Bellegarde put Sims in touch with Treaty 7 nations as WestJet is headquartered in Calgary, Treaty 7 territory.

And so began the talks to not only promote Indigenous tourism overseas but to Indigenize WestJet.

The promotional trip, which saw flights, meals, accommodations and transportation covered for the Indigenous delegation and involved no band monies, was organized by WestJet in collaboration with the High Commission of Canada, Indigenous Tourism Association of Canada and Destination Canada.

"Our research shows that a third of international visitors to Canada are requesting ways to experience Indigenous culture. WestJet is literally opening up new airways for us into these important markets," said ITAC President Keith Henry.

ITAC organized a meet-and-greet with the larger tour operators of Europe at Canada House at Trafalgar Square, where a WestJet function was also held. As well there was a travel media networking event at Six Storeys in London to inspire travel journalists to share Indigenous tourism stories on their media platforms and channels.

Eagletail said the results of this trip will be judged at Rendez-Vous Canada, the national tourism event to be held in Toronto at the end of May. The new European contacts have scheduled appointments to meet with their Indigenous counterparts there. The hope is that European tour companies will return home and include Indigenous cultural excursion tours as part of their offerings for Canada.

Then ITA and ITAC will have to ensure that Indigenous tourism operators are “export-ready,” which means able to accept international tourists.

“At Alberta Indigenous tourism, (the) mandate is try and get more market-ready (First) Nations and businesses involved,” said Eagletail.

ITA will be hosting a series of workshops across the province on building capacity. The organization also has micro-grants available and free publicity, both through ITAC.

To help the cause, ITA is offering free membership. ITA was formed in Tsuut’ina shortly after Tsuut’ina hosted Rendez-Vous Canada in 2017.

“The goal is to get more products to increase our lists of operators in the province. Because when you look at tourism, our competitors are the U.S. Australia, Great Britain. Those are our competitors. As Canadians, we’re all in it together, collectively. It’s a partnership between Indigenous businesses, non-Indigenous businesses. That’s why this WestJet was so important,” said Eagletail.

“We really have to highlight their leadership in taking the first jump into Indigenization.”

Tourists won’t have to wait to arrive in Canada to get a feel for the Indigenous culture. Bill Alexander, executive chef at the Grey Eagle Resort & Casino in Tsuut’ina, created a menu item for the business class. Elk’s Shepherd’s Pie is just the first of the Indigenous culinary experience that will be offered on the Dreamliner, said Eagletail.

He also notes that WestJet’s magazine will include features on Indigenous tourism and businesses and that WestJet will be hiring Indigenous workers throughout their company. Soon to follow will be a sweatlodge with WestJet’s CEO and education programs with staff.

Eagletail adds that before the Dreamliner took off, Treaty 7 spiritual leaders blessed the plane and the new hangar.

“They take on a leadership role in the truth and reconciliation, they’re adding reconcili-action. It’s not just words they’re putting out there, so I’m very proud of their efforts,” said Eagletail.