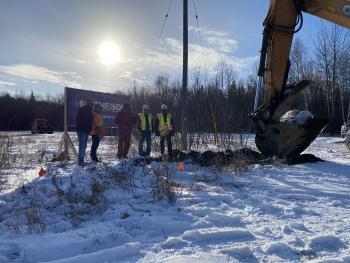 The ground is broken and a new water treatment plant is scheduled for the site for Batchewana First Nation members in 2021.

“They’re excited this is happening. There’s not much to get excited about these days with COVID happening. But this is good news.” — Chief Dean Sayers
By Sam Laskaris
Local Journalism Initiative Reporter
Windspeaker.com

It was announced this past week that a ground-breaking ceremony was staged for a water treatment plant expected to be fully functional on the First Nation in northern Ontario by the end of 2021.

“They’re happy,” Chief Dean Sayers said of the Batchewana First Nation members who will have access to clean drinking water in their homes.

“They’re excited this is happening. There’s not much to get excited about these days with COVID happening. But this is good news.”

Sayers estimates it’s been upwards of 15 years that community members have been dealing with murky, undrinkable water in their homes.

As a result, the First Nation has incurred hefty costs to bring bottled water to every home.

Sayers said Batchewana First Nation is currently paying $200,000 a year for bottled water. The First Nation buys the water from a supplier in nearby Sault Ste. Marie.

The supplier delivers a pair of five-gallon bottles of water to each home on the First Nation each week.

“We were always hoping we wouldn’t be doing that forever,” Sayers said.

An agreement to build the water treatment plant, which will be a 419 square metre facility, had been reached about six months ago.

But the COVID-19 pandemic prevented officials from staging their ground-breaking event until this past week.

Sayers said project costs did go up slightly in the past few months and local officials needed to determine that Indigenous Services Canada, which is footing the majority of the $15 million for the plant, would indeed pay for the extra expenses.

Sayers said excavation for the project is expected to begin during the second week of January.

Construction of the water treatment plant could take 12 months to complete.

“It should be ready before that, but by the latest next December,” he said.

Sayers said some Batchewana First Nation members were beginning to wonder if they would ever have clean drinking water coming out of their taps at home.

“They’ve been wondering for a few years if this would happen at all,” he said.

About 200 residents from Batchewana First Nation will benefit from the water treatment plant once it is completed.

Batchewana includes three communities. They are Goulais, Obadjiwan and Rankin.

Residents from Goulais and Obadjiwan will have access to the water from the new plant. A six-kilometre water distribution line will service residents in these two communities.

The water treatment plant will have a capacity of treating 397 cubic metres of water every day.

As for Rankin, the majority of members in that community already have clean drinking water available as they are connected to the adjacent Sault Ste. Marie water system.

Besides providing clean drinking water to members of the community, the water treatment plant will also be beneficial to Batchewana First Nation in another way.

That’s because the plant is expected to create some jobs for members of the First Nation.

“We need to have trained qualified people to run it,” Sayers said.

Three treatment plant operators are expected to be hired.

“There will also be additional people that will look after the facility,” Sayers said, adding other spinoff jobs that will be created from the facility will be in caretaking and snow removal.

Boyer Construction, a business based in Batchewana First Nation, has been hired to do the initial foundation work for the water treatment plant.

Sayer anticipates other local businesses and workers will be submitting proposals for other work that will be required as well.