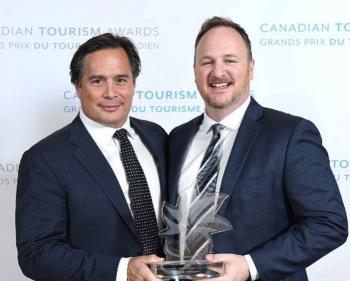 An attraction in Saskatoon that advances the understanding and appreciation of the cultures of the Northern Plains Indigenous peoples is the winner of a tourism award presented by the Indigenous Tourism Association of Canada (ITAC).

Wanuskewin Heritage Park was announced as the recipient of the 2019 National Indigenous Tourism Award on Nov. 20.

The archaeological resources of Wanuskewin are among the finest examples of pre-contact occupation of the Great Plains of North America, some of which pre-date the pyramids of Egypt, reads a press statement.

Queen Elizabeth II declared Wanuskewin a national historic site in 1987, and an interpretive centre and trails were open in 1992.

“The significance of the Wanuskewin Heritage Park as a living reminder of Indigenous peoples’ sacred relationship with the land is enormous,” said Keith Henry, president & CEO of ITAC. “The vision of the team as they bring new experiences to life has made Wanuskewin one of the top Indigenous tourism experiences in the world. I was honoured to present such a well-deserved award.”

The Indigenous Tourism Award, sponsored by ITAC, recognizes an Indigenous tourism business that demonstrates a commitment to the development, promotion and delivery of an authentic, innovative and enriching Indigenous cultural tourism visitor experience.

The other finalists in the ITAC National Indigenous Tourism Award included:

Hôtel-Musée Premières Nations – Guests to this hotel may also visit the only Huron-Wendat museum in North America along with a traditional longhouse. Indigenous experiences are celebrated throughout the property including in the warm hospitality, architecture, spa services and cuisine.

Matricia Brown—Brown is a singer, songwriter, musician, drummer and an artist. Brown has shared her culture over the last 20 years with schools throughout the Yellowhead Region. She has won the Aboriginal Women's Day award from the Edson Friendship Centre where she has served as an active board member and volunteer since 2004. She is also a member of the drumming group "Warrior Women" and has performed throughout Alberta teaching youth her songs and culture.

A number of other awards have been announced. Look to the ITAC website for more information: https://indigenoustourismconference.com/awards/