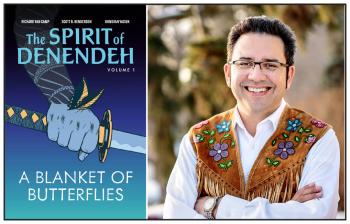 A Blanket of Butterflies is being re-released in colour. Cover of the graphic novel with author Richard Van Camp.

“I want (readers) to burst into tears. And I want them to question how they're doing on their path this time around. Are they helping? Are they contributing? Are they giving, not just taking?” —author Richard Van Camp
By Adam Laskaris
Local Journalism Initiative Reporter
Windspeaker.com

If you’re ever travelling through Fort Smith, N.W.T., you could stop to see an authentic piece of Japanese samurai armour with sword at the Northern Life Museum.

With a population of under 3,000 people, the northern town of Fort Smith wouldn’t exactly be where you’d expect to find such an artifact. And no one in town is really too sure why it’s there.

Such is the inspiration behind Richard Van Camp’s graphic novel A Blanket of Butterflies, originally published in 2015 and re-released this September as a full colour edition by HighWater Press.

It is the first in The Spirit of Denedeh series, with As I Enfold You in Petals — the second book in the series — coming out in spring 2023.

In A Blanket of Butterflies, main character Shinobu has travelled to Fort Smith to reclaim his grandfather’s samurai sword and armour. But while there, Shinobu encounters Benny the Bank, who isn’t all too eager to help him out.

Along the way, Shinobu must rely on unlikely heroes, including Sonny and his grandmother, and a visitor from the spirit world. Together they face Benny and his men, which includes a giant called Flinch.

“Will Shinobu be able to regain the lost sword and, with it, his family’s honour? Can Sonny (a young Tłı̨chǫ Dene boy) and his grandmother help Shinobu while keeping the peace in their community?”

Van Camp has his own theories about how the armour and sword got in Fort Smith.

“My favourite theory of this is that it was meant for Fort Smith, Arkansas,” Van Camp said in an interview with Windspeaker.com. “I always imagined some hungover summer students with Canada Post who are just trying to get through the morning and end up mishandling it and sending these boxes of armour to our community.”

Van Camp said he’s “so proud” of how the new edition of A Blanket of Butterflies turned out.

“I have 26 books out, but I can show A Blanket of Butterflies to anyone in the world at any time,” Van Camp said. “And it usually brings them to tears because it's a really beautiful story about redemption, not only for Shinobu, but for Benny the Bank. He’s the reluctant hero of the series.”

Van Camp said reading the books in The Spirit of Denedeh series is intended to be an emotional, thought-provoking experience.

“I want (readers) to burst into tears,” he said. “And I want them to question how they're doing on their path this time around. Are they helping? Are they contributing? Are they giving, not just taking? They say a true northerner always leaves each person in each place better than they found. Are they living that way?”

Van Camp said he hopes readers can learn something meaningful about Shinobu’s journey, both in recovering the samurai armour and in his own personal growth as well.

“And I think that that's the beauty of Shinobu. At the end you realize that he’s (complicated). He's a man with a history. But he's got a daughter on the way and he wants to do right by her. The woman hasn't given up on him and he wants to bring her back to his family.”

Van Camp felt honoured that HighWater Press chose to bring the colour edition of Blanket of Butterflies to a wider audience. The work is illustrated by Scott B. Henderson, Donovan Yaciuk, and Nickolej Villiger.

“It's a huge investment to colour a graphic novel and to go into reprint,” he said. “They could have just kept going with (the books in) black and white,” he said. “So I think what that says to me is that HighWater Press really believes in The Spirit of Denendeh.”

The film and TV rights for the series have been sold to creator Loretta Sarah Todd, who is slightly altering the title to “A Blanket of Dragonflies” in order to distinguish it a little from Van Camp’s original work. Though still in the very early writing stages, Van Camp said he’s eager to see what the final product will eventually look like.

“I'm really excited because I'm a huge fan of her work,” he said. “I love what she did for, you know, Eden Robinson's Monkey Beach adaptation. I can't wait to see what she’s going to do with this.”

A Blanket of Butterflies can be purchased through most major book retailers, and directly through HighWater Press and its partner Portage & Main Press.