‘Unthinkable circumstances’ led to children's deaths, but feelings mixed on how to move forward in Kamloops 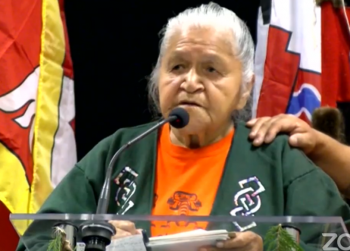 “We are here for truth telling. We are here today to honour the missing children in our caretakership who have experienced unthinkable circumstances leading to their deaths and whose remains were placed in unmarked graves.” — Chief Rosanne Casimer
By Shari Narine
Local Journalism Initiative Reporter
Windspeaker.com

As Tk’emlúps te Secwépemc Chief Rosanne Casimer pushes for student records from the federal government and Catholic church for the Kamloops Indian Residential School, at least one survivor says the bodies of the children who lie in unmarked graves located at the site should not be disturbed.

Evelyn Camille was one of three survivors who spoke at an event held July 15 as Tk’emlúps te Secwépemc revealed its findings from ground penetrating radar carried out May 21 to May 24 on the grounds of the residential school. Leadership also spoke of next steps the Nation would take.

In an emotional address, Camille, who spent 10 years at the school, questioned the need and usefulness of carrying out studies at the unmarked gravesite.

"It’s going to tell me that yes, they were murdered," she said.

“I’m very saddened about the findings, although we did try to say a long time ago, to tell the people, the (politicians), that many of our survivors are missing. Now what next is what I want to know? What I would like to see is the burial site to be left undisturbed,” said Camille.

Legal counsel Don Worme said that a number of factors would be taken into consideration moving forward.

“There are concerns that there are differences in wishes; that some people wish the place to remain undisturbed. There are others who are calling for the identification of these people because they know that these are their children. We need to balance those competing interests and with the assistance and capabilities of this community, and the experts that they already have, this work will be done,” said Worme.

Casimer said no action would be taken before community consultation occurred and promised that “first and foremost, it is about love, honour and respect and dignity moving forward.”

The 200 “probable burials,” as they are called by ground penetrating radar specialist Dr. Sarah Beaulieu from the University of Fraser Valley, identified on a two-acre parcel, is a more accurate number than the original 215 stated at the end of May.

But there are likely more to come, said Beaulieu.

The two acres scanned are only a small portion of the 160-acre site that surrounds the former Kamloops school.

“I must indicate this is the first part of an investigation with a knowing and oral histories that tell us there remain much more work to be done,” said Beaulieu.

These two acres were examined initially because of a juvenile tooth found at the site in the late 1990s/early 2000s in a shovel test pit during an archaeological excavation by Simon Fraser University, and a juvenile rib that surfaced in the same area in the early 2000s.

However, more than that, says Beaulieu, were the stories told by survivors.

Casimer called these the “painful truths” carried by those who witnessed neglect and abuse that likely led to death and those who were required to dig graves.

“We are here for truth telling. We are here today to honour the missing children in our caretakership who have experienced unthinkable circumstances leading to their deaths and whose remains were placed in unmarked graves. We are mapping a way forward to bring peace to those missing children, their families and their communities.”

Casimer called out the Pope for not apologizing and the federal government for not holding the Catholic entities to task in raising the $25 million required from the class action settlement for Indian residential school survivors.

The Kamloops school was run by an order of the Roman Catholic Church, as part of a school system mandated by the federal government.

Along with the school records, Casimer also called for adequate immediate and ongoing funding from both the federal and British Columbia governments to undertake the work necessary, including documentation, protection of the children’s remains and the site, access to experts to continue the necessary work, and health and well-being services for survivors and intergenerational survivors.

Casimer pointed out that the children who attended the school came from across B.C., parts of Alberta, the Yukon and the United States. She said the home communities of these missing children must be “fully included and fully and duly resourced.”

Newly-elected Assembly of First Nations National Chief RoseAnne Archibald was in attendance. She said she was working “with urgency” on the issue of burial sites of missing children and had met with Prime Minister Justin Trudeau to make a “reasonable and fair” request for resources and funding.

She also stressed that the sites be treated as crime scenes and be investigated although not by the RCMP who played a role in taking children to residential schools. Archibald noted that the AFN had passed a resolution last week that called for the International Criminal Court to become involved.

“This has been a very difficult time for us as a nation as we are reminded once again about Canada’s assimilation policies that were meant to extinguish us as a people. Again, make no mistake. This is genocide,” said Archibald.