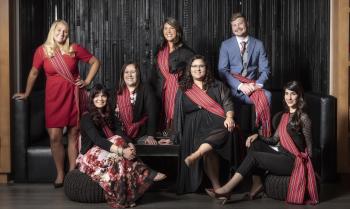 University of Alberta Medicine & Dentistry Class of 2019 graduates at the Indigenous graduation banquet in June. Photo by Laughing Dog Photography

“Thirty years ago, Indigenous post-secondary enrolment was nowhere near where it is now, so holding five spots out of the total MD program seat allotment was a meaningful measure. Over time, we know it’s become a limitation.” —Tibetha Kemble, director of the Indigenous Health Initiatives Program
By Salena Kitteringham, Laura Vega and Michael Brown
Reprinted with permission from the University of Alberta Faculty of Medicine & Dentistry

The University of Alberta is eliminating a quota system that limited the number of Indigenous students admitted to its MD program through the Indigenous Health Initiatives Program (IHIP) process.

During the next admissions applications cycle, all Indigenous candidates who meet all eligibility requirements and pass the rigorous IHIP selection processes will be offered a place in the medical school.

“By prioritizing Indigenous students’ entry into medicine, we increase our potential for transformative change and the possibility for redressing the legacy of colonial policy,” said Tibetha Kemble, director of the IHIP.

The faculty previously held an upper limit of five Indigenous students admitted to the MD program per year through the IHIP process. Indigenous applicants can also apply and be accepted through the non-Indigenous stream. The medical school accepts 162 new students every year and receives well over 1,400 applications.

“Thirty years ago, Indigenous post-secondary enrolment was nowhere near where it is now, so holding five spots out of the total MD program seat allotment was a meaningful measure,” said Kemble. “Over time, we know it’s become a limitation.”

“This is a step forward to respond to the Truth and Reconciliation Calls to Action, specifically number 23, which calls on all levels of government to increase the number of Indigenous professionals working in the health-care field,” said Shirley Schipper, ’99 MD, vice-dean of education. “Our faculty is committed to address the Calls to Action across our education programs as part of a larger mandate—to meet the health needs of our communities.”

Kemble said an increase in Indigenous MD student enrolment will eventually create a critical mass of Indigenous physicians, medical educators and other health professionals to work in communities and more broadly across systems.

“Through their work, they become important change agents in their communities and across their profession.”

Nicole Labine, ’19 MD, grew up in a Métis household in the largely Indigenous town of Fort Smith, N.W.T. After completing an honours degree in biochemistry from UBC Okanagan, Labine was accepted to the U of A’s medical school as one of five Indigenous students out of 162.

She was admitted as part of the well-meaning admissions program that had outlived its usefulness. What started out three decades ago as a policy that represented access for at least five Indigenous medical students through the IHIP process in any given year had, in recent years, become a cap.

“I’ve been involved with the interview process for three years, and we were missing out on some amazing candidates,” she said.

Labine found her way onto the Indigenous admissions subcommittee, which contributed to changing the policy to increase Indigenous students’ entry into medicine in a way that moved beyond incrementalism. Indeed, acceptances were received from nearly the entire contingent of Indigenous students who received offers this past spring.

Labine also helped to found the U of A’s first Indigenous Medical and Dental Students’ Association. She has begun a five-year general surgery residency at the University of Saskatchewan, with a goal to one day move back home to the Northwest Territories.

“It is closing the loop for me. It’s the final step that proves to me, although there were lots of barriers, I still did it, I still made it.”