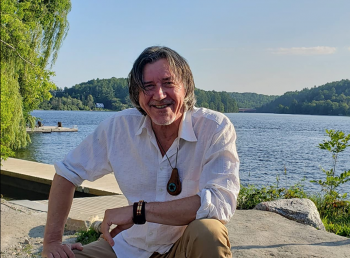 Our “Under Development” series explores the projects that are at the beginning of their journeys. They have some support, but the creatives driving them still have miles to go. We join them on their paths.
By Adam Laskaris
Windspeaker.com Contributor

With the rise of streaming services and on-demand television, there has never been a better time for the development of dystopian science fiction television anthologies.

Shows like Black Mirror and Jordan Peele’s reboot of the Twilight Zone have been just two examples of recent popular shows that have captivated audiences with a tried-and-true formula: enthralling stories about alternate realities that make the viewers wonder ‘how far off?’

Enter filmmaker Mo Thevenet with his own such show. He’s the creator of Dark Circles, a project proposed for an Indigenous-themed television series. Thevenet, the creator of the newly-launched studio Labrador Rose Films, says he’s looking to build off past ideas while keeping the show true to his own main ideas.

“It’s a dystopian future with Indigenous people ruling the society and the world,” he said. “Each show’s gonna be unique, but tied in under the same sort of premise.”

With the help of a development grant from the Indigenous Screen Office (ISO), Thevenet is currently undertaking an ambitious new plan to launch a 13-part first season. Filming will take place in one community in each of Canada’s 10 provinces and three territories.

Thevenet says that the first ever television script he read at the age of 12 was from an older installment of the Twilight Zone series. It kicked off his inspiration, and his decision to enroll in Concordia University's Creative Writing Program.

Thevenet has been the head writer of a television soap opera, has produced feature films, is currently writing for JerryCo Animations' superhero series DreamCatchers airing on APTN in 2021, and is working as creative consultant and script editor on the Indigenous language animated feature Sedna, Empress of the Sea.

A member of the NunatuKavut community of Goose Bay, Labrador, Thevenet currently resides in Wakefield, Que., located less than an hour’s drive outside of Ottawa.

For Dark Circles, Thevenet is working to gather an all-Indigenous cast and crew who can gain both valuable experience and be compensated for their work, both of which have been historically challenging for many Indigenous creatives in the past.

“We can fast-track people into the industry,” he said. “It’s an avenue to allow all the hidden talent that I know is out there.”

Thevenet’s vision is still in the early stages, as he’s developing what he refers to as the show’s ‘presentation bible’, a detailed framework outlining what his ultimate plan is for the show.

“The feel of the show has to remain consistent. Everyone’s going to understand, basically, the parameters of the show, the guidelines,” he said. “The television series bible describes the series concept, storylines, key creatives for the broadcaster to consider financing the production of the series itself and/or commit to a broadcasting or distribution deal.”

While he’ll be involved every step of the way, Thevenet’s hoping that he’ll be able to recruit 13 different teams to create one half-hour episode each. He’s interested in hearing from people who want to join those teams.

“The storylines can be whatever they imagine,” he said. “I want to change the way people perceive Indigenous people through character-driven stories. Let’s go find people and give them the opportunity. Let’s let them be in charge of the show.”

He added that it doesn’t matter exactly where each episode will be set, just that each province and territory get to be represented.

Thevenet says he’s hoping to have the ‘bible’ finished within the next few weeks, and will be presenting it to Aboriginal Peoples Television Network (APTN) after that, who he looks to give the first chance at accepting the show. He’s not currently seeking any investors, but rather just support and interest for the project at this point in time.

Thevenet imagines he might be more heavily involved in creating and writing the first few episodes of the series, but is hoping to recruit other talent to step up and make the show their own as well.

As for the name of the show itself, Thevenet said it was a pretty simple homage to an idea that came from a conversation with his brother, animator Jerry Thevenet.

“What goes around comes around,” he said. “The significance of the circle [in Indigenous cultures], it’s everywhere. It’s just something that strikes me.”

More information about the show can be found at LabradorRoseFilms.com.