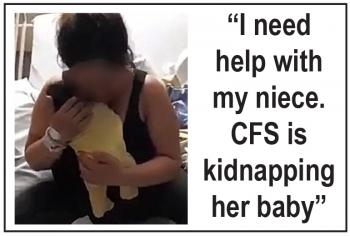 “When the baby was taken, I felt helpless.” —Uncle on child welfare apprehension of niece’s baby
By Shari Narine
Windspeaker.com Contributor 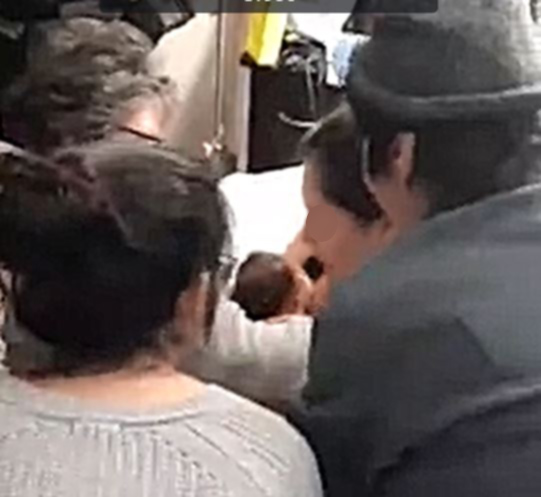 The mother’s uncle livestreamed the heartbreaking incident on Facebook as it unfolded Thursday afternoon at St. Boniface Hospital in Winnipeg.

“Hello people, I need assistance,” he said. “Are there child advocates out there? I need your help. … I need help with my niece. CFS is kidnapping her baby... I need the grassroots community to come and give me assistance. … It angers me that they continue to do this.”

Speaking to media Friday morning in the office of the First Nations Family Advocate, the uncle said “I did two videos Facebook live. It was the only way I knew how to get this attention to come out. There’s been so many overwhelming responses.”

Less than 24 hours after its posting, the video had received more than 365,000 views and was shared more than 13,000 times. Some of those viewings and responses came from women who also lost their children to CFS, said the man.

“They’re reliving their experience through that video. It’s hard for me to see, but in a way it’s good healing that they’re reaching out telling me their words, their heart-felt words,” he said.

The mother of Baby Girl said she had her child taken from her based on an accusation of being intoxicated. It’s an allegation both she and her own mother, who was beside her daughter as the baby was apprehended, say was neither proven nor true.

To make matters worse, said the baby’s mother, she had reached out to CFS. She says she met with CFS and, with the help of her auntie, put in place a plan that would see auntie and grandmother care for the newborn if so required, as they did for Baby Girl’s sibling, who is now 22 years old and a university student.

First Nations Family Advocate Cora Morgan, who spoke to media after, said they even had a notarized guardianship order in place to give auntie legal custody.  But CFS ignored it.

Morgan was strongly critical of what happened, condemning CFS for making apprehension their first move when mothers who were part of the child welfare system give birth.

“In the system as a mother, as a father, as a grandparent, they’re always deemed guilty of something and there’s no mechanism to ever prove you’re innocent,” she said, adding that a “birth alert” is automatically issued by CFS, no notice during the pregnancy is given to the birth mother, and then CFS comes to the hospital and apprehends the child.

“It’s like residential school all over again, taking our children away. Sixties Scoop. We have to stop this, what’s been going on with our children.  This is one of the many situations that First Nations members or our communities are going through. I don’t know how many children have been apprehended through the hospital,” he said.

Morgan said when the video started streaming on Facebook the family was called by CFS, told to take it down or make it even harder on themselves to get their baby back. She believes that mechanisms in place for confidentiality serve to protect the system and do not work for the families.

“Because there’s a greater understanding of what’s happening in the child welfare system our families are feeling the courage to be able to come forward. So the family was conflicted. They had that threat on the table yesterday at the hospital and they said we want to help other families. We want other mothers to see what’s happening and we want them to know it’s not okay for these things to be happening,” said Morgan.

“The reality is that this happens every single day just not every family is able to capture a video or feels the courage to be able to post it the way this family has done.”

She said that the file is being transferred to the Island Lake CFS, which will be “more friendly” and work with the family to get the baby back.

When Winnipeg CFS came to the hospital to take the baby, uncle captured on his video the family telling them that Island Lake CFS were on their way. The police said they would not wait.

Uncle says their anger is with the system and that they have prayed for the social workers and the police who were involved in the apprehension.

“No mother should have to go through what she went through, (no mother) of any ethnic background whatsoever. But this video has opened up dialogue in this discourse that needs to happen. The system that we are subject to is not a system that is for our people,” he said.

Settee promised that transformation is on the way.

Customary care approach changes made to the province’s Child and Family Services Act last spring have meant nothing, said Morgan, and serve only as “window dressing” as CFS are not implementing those changes.

Debbie Besant, CEO with Manitoba’s General Child and Family Services Authority, said in a statement released this afternoon, “I have personally reviewed this file in detail and met with the agency staff involved, including the director of the agency. I am confident in the decisions made. We will continue to work with this family, and engage with any collateral or partner agencies the family wishes to involve.”

She further said that “apprehending a child is a very difficult decision, and is done only as a last resort and when required to ensure children are kept safe.”

The federal government is presently working on new child welfare legislation aimed at giving First Nation, Metis and Inuit more control over the care of their children.