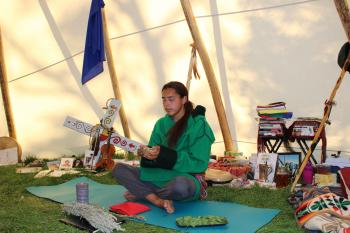 Tristen Durocher inside his tipi, set up this summer across from the Saskatchewan legislative building in Regina. Photo by Michael Bramadat-Willcock, Local Journalism Initiative Reporter

“That letter of commitment was only recently signed, after the court proceedings and the verdict. Almost as a public relations stunt to try to quell anxieties that the Saskatchewan Party didn’t really care about this issue.” — Tristen Durocher
By Michael Bramadat-Willcock
Local Journalism Initiative Reporter
Windspeaker.com

NDP Leader Ryan Meili grilled Moe on his government’s rejection of a suicide prevention bill put forward by Cumberland NDP MLA Doyle Vermette, who is himself Métis and the Opposition critic for Northern Affairs.

Durocher doesn't usually watch debates, but he was pleased to see northern and Indigenous concerns discussed at length.

“I’m not a politician. I’m a musician. I’m a 24-year-old fiddle player who decided to make a political statement… a call to action and a ceremony to help push forward our healing, begin our grieving and start a dialogue. So the dialogue has begun,” Durocher said.

The move prompted Durocher and a group of supporters to walk more than 600 kilometres from the Anglican cemetery on the Lac La Ronge Indian Band’s Fairchild reserve to the provincial legislature in Regina.

“I knew that the unanimous voting down of a piece of suicide prevention legislation was not a step in the right direction and I wanted to speak out against that action, which was that unanimous display of indifference,” Durocher said.

He set up a tipi across from the government building in Wascana Park this summer and fasted for 44 days, demanding legislation to address high suicide rates in the province.

The provincial capital commission took Durocher to court, demanding the tipi, where he was living and conducting ceremonies, be removed for violating Wascana Park bylaws.

But Court of Queen’s Bench Justice Graeme Mitchell ruled the bylaws unconstitutional and gave the park authority six months to come up with new ones.

Moe has since confirmed he’s willing to accept the judgment and there will be no appeal.

“I can say that I’m relieved that the legal chapter of this journey is over. But that still leaves the issue of the unaddressed problem,” Durocher said.

In an interview with Windspeaker.com Oct. 10 while on a campaign visit to La Ronge, Meili lambasted Moe for not meeting with Durocher.

“Moe couldn’t be bothered to even cross the road and talk to him. The only thing he managed to do was send two ministers over to tell him to get off the lawn. That sent a pretty bad message,” Meili said.

At the debate on Wednesday Moe countered with the government’s Pillars for Life suicide prevention plan.

“Legislation is not required to work on something as important as suicides,” Moe said.

He said Pillars for Life is endorsed by the Canadian Mental Health Association and is effective.

“The Pillars for Life strategy is working, is guiding us through the conversation around how we are engaging with our partners across the province on a very important conversation, one around suicides and, in particular, northern suicides,” Moe said.

Moe pointed to his government’s signing a letter of commitment with the Federation of Sovereign Indigenous Nations and the federal government in September, promising to work on solutions.

“The government of Saskatchewan did meet with Mr. Durocher and I think it’s important for us all to realize that everyone agrees with what Mr. Durocher is advocating for,” Moe said.

Moe didn’t say if he regrets not having met with Durocher in person, but he called a discussion between Durocher, Warren Keading, Rural and Remote Health minister, and Lori Carr, Government Relations minister, “fulsome.”

“We all need to work collaboratively on reducing Indigenous suicides and reducing suicides in northern Saskatchewan,” Moe said.

“This is a government that takes suicides, it takes mental health, it takes addictions very, very seriously and I would point us back to just the most recent budget.”

“We’re going to ensure now that the outcomes are coming,” Moe said.

The premier’s attention came late in the game for Durocher. During his time in Regina he had expressed an interest in meeting with Moe.

“That letter of commitment was only recently signed, after the court proceedings and the verdict. Almost as a public relations stunt to try to quell anxieties that the Saskatchewan Party didn’t really care about this issue,” Durocher said.

Durocher said the ministers who did meet with him are relatively low level officials and didn’t engage in a meaningful discussion. But he’s glad that the work is finally starting.

“Now that I’ve done that and some balls are rolling, and actions are beginning to be taken, I’m not quick to be critical. I’m hoping that whoever presents action to deal with this issue is successful because their success is the success of our young people. Whoever is ready to commit to solutions, I wish them all the success in the world, because it’s for everybody.”

Durocher is heading back to northern Manitoba, where he teaches fiddle to children in communities, including Thompson. “That’s my form of suicide prevention,” Durocher said.