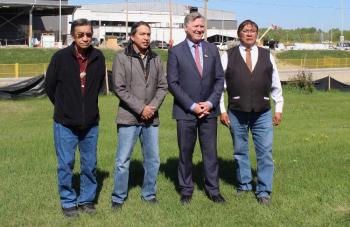 “We are designing the venue to reflect and embrace the spirit of our nation so that all those visiting will learn about our history and culture.” —Chief Lee Crowchild of Tsuut’ina Nation

The Tsuut’ina Nation has partnered with the Alberta government to reduce the community’s carbon footprint by providing an energy efficient sportsplex.

The Alberta government held a press conference, May 23, on the Tsuut’ina Nation, located southwest of Calgary, to announce the $2,156,686 grant the Nation is to receive through Alberta’s Indigenous Energy Efficiency Program.

“This will be a first-class world class community building that is also taking care of the environment in some great ways,” said Minister of Indigenous Relations Richard Feehan. He said the sportsplex is expected to reduce greenhouse gas emissions by more than 600 tonnes a year.

“I think this is a great moment of success,” he added.

The Seven Chiefs Sportsplex is still undergoing construction, and the grant will be used for an energy efficient ice plant, according to Chief Lee Crowchild of Tsuut’ina Nation, as well as upgrades to the building’s water system. The Sportsplex will be home to two NHL sized hockey rinks. A third covered outdoor rink will also be built and have its own heated dressing room.

“Needless to say, we are being approached by every league to use our ice,” said Crowchild. He said the Jim Starlight Community Centre, which is also part of the Seven Chief Sportsplex, will be essentially a 52,000 square foot gym and the “largest facility of its kind” in and around Calgary.

The chief also said they will be partnering with two of Calgary’s educational institutes—Mount Royal University and SAIT—in order to provide a fitness centre and an 1,100 square foot commercial kitchen as a training centre for each institute respectively.

“We are designing the venue to reflect and embrace the spirit of our nation so that all those visiting will learn about our history and culture,” said Crowchild.

These upgrades will save the community $89,000 per year in electricity and heating costs.

“We envision a technology and innovation centre and what better way to launch a new era than by putting our collective creativity and innovation to protect our environment and address climate change,” said Crowchild. “We are very grateful for the government’s support in providing the funding—a gift that will keep on giving for decades to come.”

The sportsplex is scheduled to open early 2019.