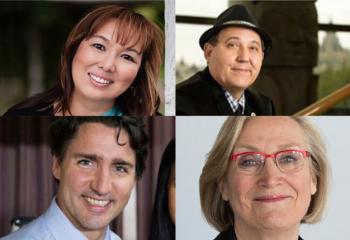 “I believe Trudeau’s office controls the agenda for Indigenous people. Somewhere along the line, these groups—AFN, ITK, MNC—they got to this guy and said we want you to exclude the constituents of the Congress of Aboriginal Peoples. And that’s what he’s done,” —CAP National Vice-Chief Kim Beaudin
By Shari Narine

At a time when Prime Minister Justin Trudeau promises a better relationship with the country’s Indigenous people, two national Indigenous organizations are frustrated that they aren’t reaping the benefits of that promise, especially as one is headed by a former Liberal MP.

The Congress of Aboriginal Peoples (CAP) and the Native Women’s Association of Canada (NWAC) both claim they are looking in as Trudeau and federal ministers sign formal agreements with the other three national Indigenous organizations (NIOs): the Assembly of First Nations (AFN), the Metis National Council (MNC) and the Inuit Tapiriit Kanatami (ITK).

It’s particularly frustrating, said CAP National Vice-Chief Kim Beaudin, when his organization is led by former Liberal MP Robert Bertrand. Since becoming head of CAP, however, Bertrand’s Indigenous roots have been called into question. Beaudin doesn’t know if this is why the federal government has been distancing itself from CAP.

A statement from Crown-Indigenous Relations Minister Carolyn Bennett’s office says the government is continuing to work with both organizations.

That work has been limited and slow, say CAP and NWAC, considering the amount of activity that has already occurred with the other three NIOs.

In 2017, the Prime Minister’s Office signed an accord with MNC, a declaration with ITK creating the Inuit-Crown Partnership Committee, and a Memorandum of Understanding on Joint Priorities with AFN.

Any similar agreement has been a struggle for NWAC and CAP to achieve.

“Thus far, the federal government has rejected an accord with NWAC. However, we continue to discuss this matter and NWAC is confident the federal government will fulfill their obligations to implement UNDRIP (the United Nations Declaration on the Rights of Indigenous Peoples),” said Francyne Joe, president of NWAC.

“We’re in the process of putting together an accord with them and they keep coming back to us and changing the language. For example, we’re a rights-based organization. They keep pulling that term out of it,” said Beaudin. “Anything related to advocacy, rights-based, they want that gone.”

Bennett’s office says it is working toward an MOU with NWAC “that will set out how they will work together to ensure that the voices of Indigenous women are heard in the co-development of policy, programs and legislation.”

As for CAP, her office says “negotiations are in the final stages toward a new Political Accord … (which) will establish a mutually agreed upon process to work together on jointly developed priorities.”

The office did not offer any reasons for the delays.

If the federal government has chosen to prioritize the other NIOs as representing all Indigenous peoples, both Beaudin and Joe are quick to point out that isn’t accurate.

CAP purports to represent non-status Indians, urban Indigenous peoples, southern Inuit and Metis. Those Metis represented by CAP “do not have a direct connection to the Red River,” said Beaudin.

He also says that AFN’s representation focuses on those living on-reserve and close to 60 per cent of First Nations people now live in urban settings and need CAP as their voice. CAP has affiliates in nine provinces and Labrador.

Joe points out that the AFN’s women’s council is limited to on-reserve voices and that it is easy for women to be silenced within large organizations like MNC and ITK.

NWAC has been in operation since 1974 with representatives in every province and two territories. The organization says it is the voice of Indigenous women and girls, both on and off-reserve, both status and non-status Indian, and most recently added are those of the LGBTQ2S community.

The MNC represents Metis, defined as a historical people with a distinct culture and is a contemporary rights bearing community from Ontario west. The ITK represents Inuit, who primarily live in the Northwest Territories, Nunavut, Northern Québec, and Northern Labrador, although southern Inuit are represented as beneficiaries of those four regions. The AFN represents First Nations people, with decisions driven by chiefs in assembly.

“The greater number of voices we have at the table, the better legislation and advocacy Canada is going to do for its people,” said Joe.

She also points out that it was the years-long work undertaken by NWAC that resulted in the National Inquiry into Murdered and Missing Indigenous Women and Girls.

However, NWAC has found its voice now restricted to primarily “women’s issues.” Bennett’s office points out that NWAC’s core operational funding has increased by 67 per cent in the past two years and it has received federal funding to participate in the Descheneaux/Bill S-3 consultations, the Honouring Indigenous Women project, the You are Not Alone project and contributions toward the new Social and Cultural Innovation project.

Joe says women need to be involved in the larger issues, including the Recognition and Implementation of Indigenous Rights Framework. With more than 100 consultation meetings held by Canada, none was with NWAC.

“If we find out about these tables, we do put the ask (to attend). But we don’t always know when we’ve been left out or when we’ve been overlooked so it’s difficult for us to know whether or not we’re being included. It’s more important this government invite us to be inclusive of our Indigenous female voices at the tables where issues that affect us are being discussed,” said Joe.

Beaudin says he recently “crashed” a meeting in Saskatoon where Bennett was meeting with chiefs and Metis Nation-Saskatchewan to discuss the Indigenous Rights Framework.

“I couldn’t believe it, what was going on in terms of holding these meetings and we knew nothing about it. They just wouldn’t say a word to us,” he said. Beaudin acknowledges the MNS for allowing him to stay.

CAP and NWAC have also had less access to Trudeau and other ministers despite a commitment from Trudeau to meet with both organizations annually. Neither Trudeau nor Bennett has been at CAP’s annual general assembly since 2015 and Trudeau’s and Bennett’s only attendance at an NWAC AGA came in 2017.  In contrast, the AFN has hosted Trudeau at its chiefs assemblies in 2015, 2016 and 2018.

“At one time we had a really good relationship with Bennett. She came to CAP’s AGAs when she was a Member of Parliament, when she was in opposition. And all of a sudden she couldn’t be bothered to show up to the AGA,” said Beaudin.

“These are messages. They’re not putting it in writing, but they’re certainly sending you a powerful message when it comes to that,” he said.

Beaudin says the government’s focus on the larger NIOs may also be part of its plan to pare down the Indigenous groups it deals with the same way it’s paring down First Nations by pushing them into joint self-governing units.

“I think the other three organizations are looking out for their organizations first. I think they don’t want to rock the boat, but this government, unfortunately in this day and age, is leaving Indigenous women out of these discussions,” said Joe.

Beaudin isn’t as generous with his belief on the role played by the other three NIOs.

“I believe Trudeau’s office controls the agenda for Indigenous people. Somewhere along the line, these groups—AFN, ITK, MNC—they got to this guy and said we want you to exclude the constituents of the Congress of Aboriginal Peoples. And that’s what he’s done,” said Beaudin.