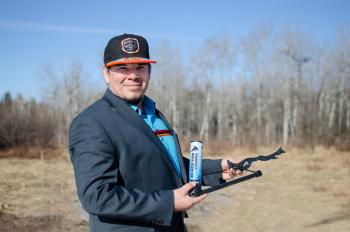 “I got the idea from being out on the ice. I couldn’t get anything to fit into my packsack. I realized there wasn’t anything like this around.” — Brendan Syrette
By Sam Laskaris
Windspeaker.com Contributor
BATCHEWANA FIRST NATION, Ont.

Funding from the provincial government will help an Indigenous man from northern Ontario grow his already flourishing business even more.

Brendan Syrette, a member of the Batchewana First Nation near Sault Ste. Marie, is the owner of Black Fox Fishing.

Syrette invented The Trigger, a compact and revolutionary ice fishing rod holder, which also automatically sets the hook when a fish bites. He estimates he’s sold about 15,000 units since his company was incorporated in June 2017.

Black Fox Fishing is expected to boost its productivity of The Trigger as it was recently announced the company will receive $50,000 in funding from the Ontario government.

Syrette said his company, which currently employs three people, will be able to hire a couple of others now to increase productivity of The Trigger. Plus, he plans to purchase some new band saws, drill presses and sticker printers for the company’s facility, located on the Batchewana First Nation.

Black Fox Fishing might also be able to shell out a bit more on marketing now. Syrette said the business only spent about $300 this past year on its marketing efforts.

The Trigger is currently available at about 50 Canadian Tire outlets throughout Ontario, Alberta, Quebec, Manitoba and Saskatchewan.

“We also do sell to a lot of mom and pop shops,” Syrette said. “And we sell online to several places in Canada and the United States.”

The Trigger can be bought through Black Fox Fishing’s online store for $37.95 (Canadian). https://www.blackfoxfishing.com/

Company officials are hoping that during the next ice fishing season Black Fox Fishing will be able to have some significant sales in the states of Wisconsin and Minnesota.

A goal is that The Trigger will be eventually be sold abroad as well.

“We’ve had people reach out to us from Finland and Russia,” Syrette said. “Those are two countries that are huge into ice fishing. I can see people from there picking this up.”

Though he incorporated Black Fox Fishing to start selling The Trigger a couple of years ago, Syrette, 37, said he started tinkering with his invention a half dozen years ago.

“I got the idea from being out on the ice,” he said. “I couldn’t get anything to fit into my packsack. I realized there wasn’t anything like this around.”

There was plenty of trial and error involved before Syrette was able to come up with a product he could put on the market.

The Trigger is 17 inches long and three inches in diameter. The pipe of the rod holder is designed to hug the legs of the stand it sits on.

“I found out about 50 ways not to make this apparatus,” said Syrette, who worked in construction before he started up Black Fox Fishing. “I came up with a bunch of different ways to do it. But the cost was really extraordinary. It wasn’t feasible.”

Both Syrette and Babcock, believe that because they have been working alongside one another the past couple of years is helping Indigenous and non-Indigenous relationships in their area.

“I think it’s helped tie the bonds between First Nations people and the people of Sault Ste. Marie,” Babcock said, who has Italian, German and English ancestry.

Babcock, a 31-year-old who started working with Black Fox Fishing during the spring of 2016, said he himself has a better understanding of Indigenous life simply by being around Syrette.

“I think we might be setting a template for white and Anishinabe relationships,” Babcock said. “I’ve learned more about Anishinabe life in the past three years than I have in my whole life.”

“One thing I’ve learned working with Mike is that we have learned a lot about each other and how mind-frames work outside of Black Fox Fishing,” he said.

The Trigger is currently Black Fox Fishing’s main product. But that is expected to change at some point.

“We have other inventions besides The Trigger,” Syrette said. “But we haven’t unveiled those yet. Maybe by the end of next winter. But we’ll see.”

“The business had already taken off,” Syrette said. “But this money will help us get to another level.”

The provincial funding that Black Fox Fishing will receive is via the Northern Ontario Heritage Fund Corporation.

Since last June almost 350 projects have received close to $60 million from this funding.