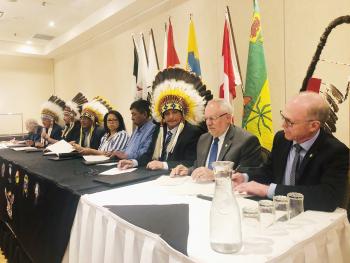 The five-year agreement between the Saskatoon Tribal Council and Saskatoon Public Schools was signed June 27.

“When you have a seat at the table, you actually get to have a voice.” —Tribal Chief Mark Arcand
By Shari Narine
Windspeaker.com Contributor

The new agreement, signed June 27, will see a “sub-board” created with an equal number of representatives from SPS and the STC to allow First Nations to have direct input into the creation of curriculum.

“(SPS) is doing a good job, but it’s time to enhance it. We want to focus on culture, language, identity. No more just access to school, but we want to look at the transformation of that school to really enhance the cultural experience of our people and focusing on treaty and inherent rights,” said Arcand.

For the past 13 years, STC and SPS have had a working relationship, in which the school system has solicited STC’s input and recommendations in specific areas.

"Today's signing marks the evolution of this partnership as we recognize the important role First Nations' governments play in education. This partnership will help us build deeper language and cultural learning opportunities for students, as well as enhanced support for families moving between our communities. Public education must be accessible to all and meet the needs of the community,” said Ray Morrison, board chair for Saskatoon Public Schools.

STC will co-govern three schools with SPS in Saskatoon: Mount Royal Collegiate, a high school in which the majority of students are First Nations; Confederation Park Community School, which offers a Cree language and cultural program for pre-kindergarten to Grade 8; and Princess Alexandra Community School in the inner city.

Arcand says it’s important that students learn in the classroom setting about First Nations in a way that is relevant to their province. He wants them to learn about treaty rights and entitlement.

“At the end of the day we want to educate people about the treaties in the younger generation so they can be advocates. Doesn’t matter their race, culture, identity, but most importantly to our young Indigenous people, they need to be taught that,” he said.

Arcand also points out that the agreement will help children who are coming from on-reserve schools to schools in Saskatoon, by helping them bridge the gap.

The agreement will also help raise the graduation rate of First Nations children, allowing them to pursue post-secondary schooling.

“We know that language loss and culture loss is a big thing for Indigenous people because of residential schools. So this is why this is a big day today to really get this focused for transformation for culture, language and identity so students graduate with a strong sense of who they are,” said Arcand.

He noted that representatives from the University of Saskatchewan were at the signing as a show of their “investment” in the success of First Nations kids.

The joint leadership group for co-governance of urban Indigenous education will be established by Sept. 1 to implement curriculum changes for the upcoming school year. Arcand anticipates there will be meetings over the summer.

Arcand says STC has only a “working relationship” with Saskatoon Catholic Schools although STC has reached out to the Catholic schools.

“It’s up to them. We say to them and everybody else, ‘If you want to make change and reconciliation, we’re willing to do that,’” he said.

Such a partnership, whether with division-wide or local school boards, is something Arcand encourages other First Nations or tribal councils to pursue.

“Because now, when you have a seat at the table, you actually get to have a voice. It’s not just one person, but splitting the board so it’s equal and you’re doing it for the best interest of the organization, the best interest of the children. Because if we can do that we can continue to influence the education system to benefit First Nations’ kids where … We can actually make it better by having a say in the curriculum,” he said.