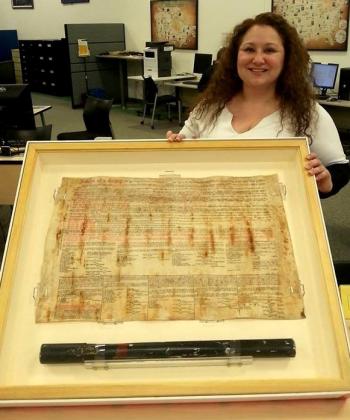 “At what point did we give up our nationhood? All we did was agree to share the land.”

A rare document was recently put on display at the First Nations University of Canada in Regina, Saskatchewan.

The document is a “travelling copy” of Treaty 8, signed in 1899, found tucked away in a cabinet at FNUC, a find that left the university library staff dumbfounded as to where it even came from.

Last summer, the staff had it specially conserved and placed in a museum-grade box, and it is now open for public viewing.

“The rarity of the document is because it’s a travelling Treaty. Somebody would have had them and they would get rolled up and unrolled… It was put on horseback, it was in a canoe…,” said Paula Daigle, librarian at FNUC, referring to the rough handling the document received in comparison to other government papers.

“They were made out of sheepskin or goatskin… The tube it was carried in would have been made out of cheap metal. We know we have the original carrying case because the rust stains actually imprinted itself on the treaty,” she said.

Treaty 8 covers the northeastern part of B.C., part of northern Alberta, the southern part of the Northwest Territories, and part of northwest Saskatchewan. The area constitutes the largest land mass in of any of the Canadian treaties.

According to Daigle, the travelling copies were used by Indian Agents, as they travelled from First Nation to First Nation, to show to tribe members. The copy at FNUC would have been made just after the signing of Treaty 8 in 1899, (there is an original Treaty 8 document which is currently being cared for in Ottawa).

Daigle says the document was in bad shape when she first laid eyes on it, prior to it being conserved for FNUC by DS Conservation Services. Along with being framed, it’s been laid inside a museum-quality glass box, which even filters out UV light so the writing doesn’t fade under sunlight or when people take photos using the flash on their cameras.

“The red ink is light sensitive, so although we have a UV box, I still don’t want people taking pictures with the flash on it,” said Daigle. “It’s worth 17-and-a-half thousand dollars… that’s what the insurance is appraised at,” she added.

What’s really special about this particular treaty, according to Danette Starblanket, a professor of Indigenous Studies at FNUC, is that it is known as the “Taxation Treaty.” It’s the first treaty to even mention taxes for First Nations people. She says it’s a wonder First Nations people aren’t coming to access this treaty and use it as solid evidence for why they should still not be paying taxes.

“The (Indian Treaty) Commissioners sent a letter to the corporate systems in 1899. They said, ‘There was expressed at every point the fear of making the Treaty would be followed by curtailment of the hunting and fishing privileges, and many were impressed with the notion that the treaty would lead to taxation and enforced military service,’” said Starblanket, quoting directly word-for-word from the letter which is still archived and accessible to the public by the Canadian government today.

The letter then continues on to say that these officials “assured” the First Nations people that the treaty “would not lead to enforced interference” and that it did not “open the way for imposition of any tax,” as well as not enforcing any military service, said Starblanket.

“Our leaders need to look at that. Those are signs of sovereignty. Because why would another nation enforce taxes after coming into their land?... That would be like France coming into Canada and saying ‘Ok, we want you to pay a French tax,’” she said.

Starblanket also believes using research done on Treaty 8 would be a good way to explain to the public why First Nations do not, or should not pay taxes. It’s human nature, she says, to be jealous if you have to do something that another person does not.

“It would be an explanation of that to the general public so that animosity can be broken down… That’s what we’ve done with this whole taxation thing and non-taxation thing, is create this whole misconception that First Nations in contemporary society do not contribute to the economy. There has to be that understanding,” she said.

The taxation piece, however, is not written into the text of the Treaty itself. Knowledge of that comes through correspondence letters written after the signing, like the one mentioned here. This, too, is significant, says Starblanket, because there is often a misunderstanding between what was agreed to verbally, and what was written down, at the time that Treaties were signed.

She argues for the importance of cross-checking with oral histories, to acknowledge the “spirit and intent” of any government interactions with First Nations people.

“At what point did we give up our nationhood? All we did was agree to share the land,” said Starblanket.

“And the commissioner said, the offer is on top of what you already have… I told my students, ‘Why would we give up what we had for a few trinkets, and pots and mirrors? That’s saying we’re really stupid, and I for one am not willing to admit that about my Moshums,” she said.