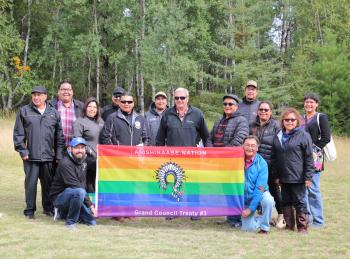 “We’re going to require that the four directions in our territory will have to be represented. So we’re going to require somebody from the east, the south, west and north. And then it’s going to be amongst them…”— Ogichidaa Francis Kavanaugh
By Andrea Smith
Local Journalism Initiative Reporter
Windspeaker.com

Ogichidaa (headman) Francis Kavanaugh and Grand Council Treaty #3 (GCT3) have recently taken a stand on LGBTQ2S (Lesbian, Gay, Bisexual, Transgender, Queer or Questioning, and Two-Spirit) rights, and lifted that demographic up within their communities in Ontario.

For years, there have been four councils within GCT3—the Women’s, Men’s, Elders’ and Youth councils. Now there is a fifth. The LGBTQ2S people will have an official role in governance.

Kavanaugh feels this an important move, and will only help strengthen the voice of Indigenous peoples as a whole.

“We won’t identify anyone at this point in time. We know who they are, but we’re not going to force them to come out and identify themselves,” said Kavanaugh of who would likely be on the council going forward.

“We’re going to require that the four directions in our territory will have to be represented. So we’re going to require somebody from the east, the south, west and north. And then it’s going to be amongst them… They will convene a meeting where they’ll get together through a traditional selection process. They’ll identify who will represent them in our governance structure,” he said.

Kavanaugh said COVID-19, with the resulting restrictions and shutdowns, and the slowing of the pace of life for most people, gave the community and GCT3 time to reflect. They spent a lot of time talking with LGBTQ2S people and people in leadership roles, hearing their stories and opinions, as well as their struggles.

He was told that LGBTQ2S people were a group of people who were drastically affected by some of the COVID-19-related troubles. The isolation it caused for many people was pronounced in their lives, he said, particularly because they already feel very isolated from others. And like they “don’t fit in.” He was also told they are a group who might be most at risk of self-harm, again because of that feeling of isolation and alienation from others, he said.

Having this new awareness, Kavanaugh felt compelled to bring LGBTQ2S folks into a more valued position. He also feels that because of who they are, they have very specific strengths that can really help Indigenous communities to govern themselves better, including fighting for Treaty rights and territory against the Federal government.

In his more than 40 years of work in politics and leadership, Kavanaugh has noticed that LGBTQ2S people greatly contribute to the success of their communities and their members.

“Myself, I look to others to move forward with the agenda items that are on my plate… I recognize a person’s capacity to do that, and I find that two-spirited people have that added element as we seek strategies to deal with our Treaty rights,” said Kavanaugh.

He anticipates that the council will be in effect very soon. GCT3 hosted a Chiefs-in-Assembly (outdoors, for COVID-19 safety reasons) back in July. They plan to hold another one in the next month or so, while the weather is still good enough to keep it outside. At this meeting, more decisions should be made around the LGBTQ2S council, and the roles of the representatives solidified.

He also thinks GCT3 might be the first First Nations council to take this kind of step.

“When I first started talking about this, you know, we did some research all across Canada. I talked to different organizations, and nobody’s done that, even though they say there is an increasing number of LGTBQ(2S) people in their communities,” he said.

“So I believe it may be the first, with respect to our Treaty 3 Nation… Maybe others will follow suit,” he said.

Some prominent LGBTQ2S activists and academics have claimed that it may be the effect of the Christian colonizer that’s created shame around two-spirit identities. When asked if he thought this was true, Kavanaugh couldn’t say for sure, but used his own experience around that as a kid in school to add to that story.

“I would think that, you know, because growing up going to school, there were kids that were gay. And sometimes I did see them being bullied… People would tease them. But I’ve never done that myself. They’re human beings, and every human being is a gift from the Creator, and we should respect that as such,” he said.

Kavanaugh said his traditional teachings are that the Creator decides who will be a boy and who will be a girl; that the person being born doesn’t have a choice in that, nor does anyone else around them. And during the times the Creator is undecided about which gender to use, then two are used.

“So in its indecision, it decides to give it two spirits, a boy and a girl. So in our teachings, an LGBTQ2S person is a very special person,” he said.