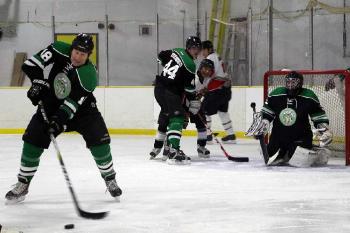 30 year anniversry for the IRC Native Hockey Tournament. Photo courtesy of the IRC

“For myself, I’m just there to have fun.” —Duane Smith, the CEO of the IRC and tournament spokesperson

An Indigenous men’s hockey tournament in the Northwest Territories is celebrating a milestone during its event which kicked off Feb. 15.

This marks the 30th year the IRC Native Hockey Tournament has been staged.

The event, organized by officials from the Inuvialuit Regional Corporation (IRC), continues until Sunday in the town of Inuvik.

The tourney will feature 16 participating squads from across the Northwest Territories.

The highest calibre A Division will feature four clubs. There will also be 10 teams competing in the B Division.

And there are also two entrants in the Oldtimers category, featuring players 35 and over.

“I believe this is the most teams we’ve ever had,” said Duane Smith, the CEO of the IRC who is also a spokesman for the tournament. “And I believe it’s because of the milestone.”

Smith said the tournament has remained popular throughout the years not only because of its timing but since it also brings communities together.

“It’s in the dead of winter,” Smith said of the event.

While some squads travel via ice roads that are built in the north, Smith added a number of other competing squads must fly into the Inuvik (Mike Zubko) Airport.

“A couple of them have been fundraising throughout the year so they could come here,” Smith said.

He added many treat the tourney as a sort of reunion.

“It brings a lot of people together,” he said. “It brings friends together and it brings families together.”

“Normally we get about 400 people coming to this event,” he said. “We’re expecting twice that, if not more this year.”

All three Inuvik hotels – a total of about 250 rooms – are booked solid throughout the tournament.

“Other people will be staying with family and friends here,” Smith said.

Besides being an organizer, Smith, who is 53, will also be playing in this week’s event. He competed in the inaugural tournament three decades ago and continues to take part.

He believes he’s competed in the event every year that he’s been in town. He did move away for five years though to work in Cambridge Bay in Nunavut.

Smith will be playing defence for the Old Dogs, one of the entrants in the Oldtimers division this year.

Smith last won a championship in this tournament, with the Old Dogs, four years ago.

Over the years he was also a member of winning teams in both the A and B divisions.

All tournament matches will be held at the Midnight Sun Complex, the main recreation and conference facility in Inuvik.

The complex will also be where a number of off-ice activities are held for the Cultural Weekend, being staged in conjunction with the tournament.

Not all but a number of previous runnings of the tourney have also had off-ice cultural activities.

As part of his CEO duties, Smith is hoping the event will annually include its Cultural Weekend, to raise more awareness of Indigenous people.

This year’s cultural activities include sewing workshops, where participants can learn to make sealskin keychains and zipper pulls.

There will also be tool making workshops. And a number of Arctic Sports and Northern Games will be demonstrated.

Members of the public will be invited to try the various sporting activities as well.

Smith said not all of those attending the tournament will want to be at every single match.

“If they want to take a break from watching hockey they can go and do some sewing or something else,” he said.

Smith is hoping some of the participating players in the tournament will also partake in the Cultural Weekend.

“It’s open to anybody that wants to do it,” he said of some of the events being offered. “If some of the players want to do it that’s fine. It’s not competitive though it’s just for recreation.”

As for those playing in the tournament, Smith said there will be some good quality hockey to watch.

“I’m not a scout myself,” he said. “Some of these guys though have been scouted in the past. The calibre is right up there with the hockey at some other big tournaments.”

“We try to limit the teams to having just local or regional players,” he said. “We don’t want teams bringing in players from elsewhere just to win this tournament.”

Smith added while some participants are seeking a championship, many others are in it for the social aspects.

“For myself, I’m just there to have fun,” he said. “A lot of that is just sitting in the dressing room with the guys or on the bench with the guys. For the A Division though, they’re there to win.”