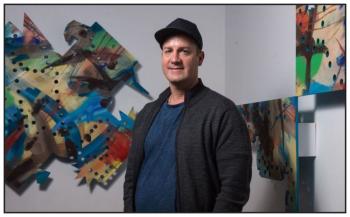 “Just witnessing triumphs and trials has enabled me to be a much more sensitive and thoughtful creator. It probably echoes through my ancestral lineage, just uppin’ and movin’ and goin’.” —artist Jason Baerg
By Adam Laskaris
Local Journalism Initiative Reporter
Windspeaker.com

Artist Jason Baerg is set for a busy weekend at the Art Toronto exhibition coming up at the Metro Toronto Convention Centre.

At an in-person event Oct. 29 to Oct. 31, more than 60 galleries from North America and Europe will be showcasing their artists’ work.

Baerg, a Cree Métis artist from Prince Albert, Sask, will be exhibiting with Fazakas Gallery based out of Vancouver, as well as presenting an Art Toronto preview with Soho House Toronto.

“They really felt like it was important to offer special project spaces to Indigenous artists so I'm very thankful to have one of those spaces,” Baerg said in an interview with Windspeaker.com.

“We're seeing dramatic increases of commercial galleries supporting Indigenous creatives,” Baerg said. “It's great to see. We're starting to see our curators hired in institutions and we're starting to see our scholars hired by universities. And they're hiring in packs. They're not just hiring an individual who will be set up to fail… There are internal support mechanisms for Indigenous people.”

Baerg’s work with Fazakas is titled Optimal Futures. It has been created “through laser-cut painting and assemblage techniques.”

“When I think about optimal futures within an Indigenous space I'm really thinking about, you know, the medicines and the teaching and the healing associated with all of those things,” Baerg said.

Much of Baerg’s work centres around the Indigenous Futurities movement, which the Fazakas Gallery describes as encouraging “the speculation and manifestation of alternative narratives.”

“There is that possibility that we can empower our people,” he said. “It’s about getting that knowledge to people that really need it, and creating pathways for change. [It’s about] championing our youth, championing our Elders. When I think about that, I just think of the best of the best.”

Baerg will also be taking part in an online panel titled 'Decolonizing Museums and Collections'.

“I really believe that when we're decolonizing any institution, it's got to be done by indigenous people,” Baerg said. “I think about reflecting on our governance models and our decision making processes. And so then I also like to think about the complexities of how our communities function… I think we're starting to do that work.”

Baerg said the main focus of his decolonization work is on Indigenizing the art community.

“As Indigenous people, we need to really ground ourselves first before we can start to actually be the custodians and assist other people who have been colonized in different lands, but are living here [in Canada],” Baerg said.

Baerg has been working in Toronto for the last four years at OCAD University. In the past, he’s also moved around Ontario, living in smaller towns like Sarnia, and has lived in bigger locales, such as Montreal and New York.

“I think journey is really important for compassion,” Baerg said. “I think I've learned a lot on my travels from various communities, Indigenous communities, as well as other cultures. And just witnessing triumphs and trials has enabled me to be a much more sensitive and thoughtful creator. It probably echoes through my ancestral lineage, just uppin’ and movin’ and goin’.”

But Baerg is happy to have found a bit of stability working in Toronto.

“I'm really thankful for that,” he said. “I think I was starting to feel like a bit of a dust in the wind, doing like three months here and three months there. So it's great to have a kind of a little more permanency with a longer-term commitment.”

In addition to the in person event, the works can be viewed online those same days. Due to COVID-19 protocols, tickets must be booked in advance online and scheduled for half-hour time blocks.

Visitors to the festival must also show proof of full COVID-19 vaccination to access the event. Tickets are $30 for adults, and $25 for students and youth.