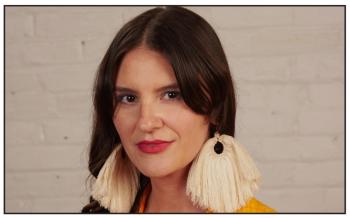 “It was really Cineplex that reached out to us to see how they could participate.” — Niki Little, artistic director, imagineNATIVE
By Sam Laskaris
Local Journalism Initiative Reporter
Windspeaker.com

For the second straight year the ongoing COVID-19 pandemic has forced organizers of the Toronto-based imagineNATIVE Film + Media Arts Festival to rethink its format.

The entire Toronto-based festival was moved online a year ago because of the pandemic.

As for this year’s festival, which runs Oct. 19 to Oct. 24, there will be both in-person and online screenings.

Festival organizers, however, are also thrilled that the event will expand to include four other major Canadian cities.

On Oct. 20, audiences in Winnipeg and Montreal will be able to see Ste. Anne, a movie by Métis filmmaker Rhayne Vermette.

Also on Oct. 20, moviegoers in Halifax and Vancouver will be able to attend the film Bootlegger.

From Algonquin filmmaker Caroline Monnet, this movie is a French feature which sees two women with opposing views divide their First Nation in northern Quebec.

The Ste. Anne and Bootlegger screenings will be shown at Cineplex theatres.

Niki Little, imagineNATIVE’s artistic director, is excited that part of the 2021 festival will be held outside Toronto for the first time.

“It was really Cineplex that reached out to us to see how they could participate,” she said.

Festival organizers decided this past March that the majority of screenings for this year’s festival would have to be staged online because of the pandemic.

But they were happy to be planning a return to some in-person screenings.

Little, a member of Garden Hill First Nation in Manitoba, said imagineNATIVE reps were obviously thrilled to partner with Cineplex when discussions arose about having some out-of-town showings.

“We thought it was a great opportunity to expand our films and to support these artists whose works will be in theatres at this time,” she said.

For now, it’s a one-year deal that Cineplex and imagineNATIVE are partnered for.

“I think it will be phenomenal to have it in future years as well,” Little said.

She said the out-of-town screenings will enable many others to get a taste of imagineNATIVE, which has been held annually since it was established in 2000.

“It’s really fun for those who might not be able to travel to Toronto,” she said.

The festival has become the largest presenter of Indigenous screen content.

A total of 145 films will be shown at this year’s festival, including 46 short films, which will be part of the festival’s online shorts program.

The short films will be divided into programs that represent the seven directions of the Medicine Wheel: East, West, North, South, Above, Below and Centre.

All of the programs will have specific themes.

For example, the East features work from youth and emerging filmmakers across Turtle Island, as well as from New Zealand and Columbia.

The South program consists of films showing the various forms love can take or be displayed.

And the Below program features short films that demonstrate courage, grounding and strength, which can be found within hidden places.

This year’s festival will also include a special drive-in screening of the film Beans, which will be held in Toronto on Oct. 21.

Beans is the coming-of-age story of a Mohawk girl set during the Oka Crisis in 1990. The movie is directed by Tracey Deer.

Beans was inspired by Deer’s own experiences of the crisis, which occurred when she was 12.

Beans has already won a couple of major accolades. At the Canadian Screen Awards held this past May the film was chosen as the Best Motion Picture, and Deer was recognized for having the Best First Feature Film.

The imagineNATIVE opening night film will be Night Raiders, from Cree/Métis filmmaker Danis Goulet, who now lives in Toronto but is from La Ronge, Sask.

Night Raiders takes place in a post-war future and is about a mother who joins vigilantes as they attempt to save her daughter from a state-run institution.

Night Raiders had its world premiere at the Berlin International Film Festival in Germany this past March. Goulet’s film also earned rave reviews when it was screened at TIFF last month.

And she was announced as this year’s recipient of the TIFF Emerging Talent Award.

The entire festival schedule and information on in-person and online screenings is available at www.imagineNATIVE.org