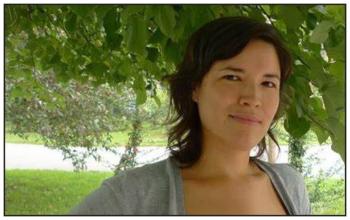 “It doesn't end after me. I'm not the only one. It means that it opens the door, and then more people will come through.” — artist Maria Hupfield
By Adam Laskaris
Local Journalism Initiative Reporter
Windspeaker.com

For many, a walk through Toronto’s ravines would simply be a nice way to spend an afternoon.

Hupfield belongs to the Wasauksing First Nation located in Ontario near Parry Sound. She is the first recipient of the ArtWorxTO Legacy Artist in Residence Program, officially announced earlier this month.

Hupfield’s work deals primarily with the preservation of Toronto’s extensive network of ravines, which extends to more than 300 km and covers 17 per cent of Toronto’s land area. This ravine network has been heavily impacted by the effects of both urbanization and climate change.

Hupfield has previously worked on projects with the Don Valley and Credit Valley rivers, the latter of which is located close to the University of Toronto — Mississauga (UTM) campus where she teaches in the departments of visual studies, English and drama.

“This is another great occasion to make the ravines basically my studio,” Hupfield said in an interview with Windspeaker.com about the new residency program.

“I feel my responsibility as someone who has an Indigenous position at a university. Part of the work I do as someone in this role and who has this title is to understand where I am and what my responsibility to this place is. And that's something I take very seriously being in my role as an educator as well as an artist.”

She will be working primarily with the Urban Forestry Division of the City of Toronto’s Parks, Forestry and Recreation department.

“What I liked about the [residency] is that there's no rules in place. (The parameters) aren’t established yet so I can come in and that allows me, really, the freedom to imagine a whole scope of things,” Hupfield said “There's often a lot of opportunities out there, so I'm pretty selective, but one of the things that appealed to me about this particular one was that it's new (yet) felt pretty prestigious.”

Hupfield is being tasked by the program with developing “creative approaches to sustainably celebrate these spaces.”

“A lot of the work I do at (UTM) really involves rethinking what our relationship to the land is,” Hupfield said. “We hear that a lot, but how I usually phrase it is changing the culture around our relationship to place, to land, so that it's not one of extraction, but rather one of relation.”

Hupfield’s work has been featured in galleries and museums around the globe, including New York, Phoenix, Santa Fe, Montreal, Zurich, and Toronto. She said past art experiences have taught her different methods of creating her final product.

“It doesn’t always seem obvious when you’re in an artistic process how your research can, in the end, result in a tangible object or a performance,” Hupfield said. “I'm going to spend some time in the ravines having conversations with different people that will result in the public-facing art piece.”

Hupfield moved to Toronto in 2019 shortly before the COVID-19 pandemic.

“I’ve been doing a lot of reconnecting to the city,” she said.

“In reality, there's so many of us who are living in these spaces. And one of the things about urban spaces is that green spaces are highly sought after.”

Hupfield said access to green spaces is “often equated with wealth or privilege”, with her work looking to increase access to and highlight the importance of public green spaces.

Though Hupfield is the first artist to undertake the ArtWorxTO residency program, she stressed the importance of treating her tenure as a legacy project.

“It doesn't end after me. I'm not the only one. It means that it opens the door, and then more people will come through,” Hupfield said.

“That's something I'm always mindful of with every project I do. Whether it's in a gallery or a residency or an academic position, (she is mindful) that I'm opening the door. I’m trying to be a buffer, but also to begin those relationships in a mindful way so that the people who come up next, things will only get easier, and that it will increase access as well.”