Too many questions remain with National Chief Archibald’s suspension, says BC Kukpi7 Wilson 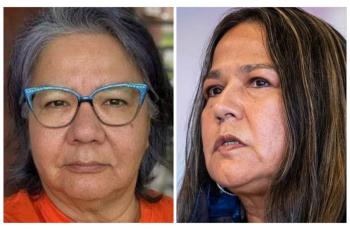 “Over the years as chiefs, we’ve been hearing (about corruption). We would put our concerns forward… Then we were told it was dealt with. But now, we see it wasn’t dealt with, obviously. There does have to be that investigation, that financial forensic audit.” —Kukpi7 Judy Wilson
By Shari Narine
Local Journalism Initiative Reporter
Windspeaker.com

Neskonlith Indian Band Kukpi7 Judy Wilson anticipates “a lot of realignment, a lot of house cleaning, a lot of policy (and) procedure strengthening or even redoing” by the time allegations of corruption are dealt with in the Assembly of First Nations (AFN).

Almost two weeks ago, National Chief RoseAnne Archibald levelled charges of corruption happening within the AFN, which she was elected to lead in July 2021. She called for a forensic audit.

Subsequently, she was suspended by the AFN executive committee and AFN secretariat board for commenting publicly on a whistleblower investigation that was being carried out against her, which Archibald claims was launched in retaliation to her calling out wrongdoings.

Wilson told Windspeaker.com on June 28 that corruption at the AFN is not a new issue to her.

“Over the years as chiefs, we’ve been hearing (about corruption). We would put our concerns forward… Then we were told it was dealt with. But now, we see it wasn’t dealt with, obviously. There does have to be that investigation, that financial forensic audit,” said Wilson.

Yesterday, British Columbia chiefs met with Archibald in a closed-door meeting. In an interview with Windspeaker.com on June 25, Archibald said she had been invited by the BC chiefs and would be presenting them with documented evidence of alleged corruption at the AFN.

“I can confirm the BC chiefs met in camera and reviewed documents,” said Wilson.

The meeting with Archibald followed a few days after BC chiefs, led by BC Regional Chief Terry Teegee, met with AFN spokespersons regional chiefs Paul Prosper (Nova Scotia/Newfoundland) and Ghislain Picard (Quebec/Labrador). Wilson said too many questions were left unanswered following that meeting.

“There’s been a lot of questions as to how this unfolded,” she said.

In search of clarity Wilson started poring through AFN documents. She wanted to know who had the authority to suspend Archibald. Her reading indicated that Archibald could be suspended as a director, but not as national chief.

Also brought into question was why the executive council had jumped straight to suspending Archibald, since options such as a 20-day suspension or mediation were available.

“I didn’t see either of those apparent in the process. I was interested in a timeline. I understand better of the timeline now,” said Wilson.

It made her wonder about how conflicts-of-interest would be dealt with if either elected chiefs or hired staff may be incriminated by a forensic audit.

“There’s more questions and that’s why I want the decision records,” said Wilson. Those records would outline the advice the executive council received.

What’s becoming more apparent, she said, is the need not only for a forensic audit, but a revisiting of governance policies and procedures that look at human resources and hiring, legal counsel and financial personnel, processes, and at the governance structure.

What’s also becoming apparent, Wilson said, is the need to decolonize not only the institutions the AFN works with, but the AFN itself.

“I think an epiphany came to me. It was that as we’re decolonizing ourselves through the legislation and policies and the colonial notions, we may be where we have to have our critical eye on our own organizations as well. How are we looking at our organizations?” said Wilson.

“I think when we’re doing our decolonizing, how are we decolonizing ourselves as well? It’s not just to government and the other institutes and organizations. I think that’s really important.”

With a financial audit not being approved by the executive council, Wilson wants to see chiefs discuss it and possibly bring a resolution forward at the July 5 to July 7 annual general assembly in Vancouver. She also wants to have Archibald in attendance to answer questions. At this point the AFN executive has banned Archibald from attending.

Wilson does not want to see the entire AGA agenda taken over by the politics of the AFN.

“There are many, many issues our chiefs-in-assembly work on when we are there, but I know we need to address the governance and the audit of the financial issues and the staffing issues and the executive decisions. We need to address all of that. I’m hoping maybe the first day and set out a path forward so we can get our business done,” said Wilson.

Wilson admitted that having the issues facing AFN playing out in public is not a good look. But she also noted it’s not unique. She pointed to Prime Minister Justin Trudeau and the SNC-Lavalin scandal in 2019 and how the Parliamentary Budget Officer is saying the federal government, which bought the Trans Mountain pipeline, it now has a present value of negative $600 million.

“We’ll get through this and when we get through it, I know it’s going to result in stronger policies and procedures and more transparency and accountability. I think…we (will) have that and also the direction we want to go in regards to our national highest office of our peoples,” said Wilson.

“There’s really important reasons why we have a national organization… We need to look at how we do our work on these important issues.”