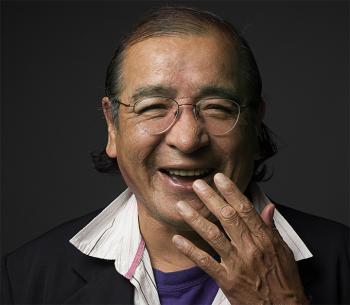 “Laughter is the reason for existence on the planet earth. To have a good time.” — Tomson Highway
By Crystal St.Pierre
Local Journalism Initiative Reporter
Windspeaker.com

Author, musician and playwright Tomson Highway is travelling across Canada to promote his new book Laughing with the Trickster: On Sex, Death, and Accordions.

“They can look forward to laughing and having a very, very good time,” said Highway about his upcoming CBC Massey Lectures taking place Sept. 7 in Fredericton at The Fredericton Playhouse; Sept. 9 in St. John's at the D.F. Cook Recital Hall, Memorial University; Sept. 14 in Saskatoon at the Broadway Theatre; Sept. 16 in Vancouver at the York Theatre; and Sept. 23 in Toronto at Koerner Hall.

Tickets for the lectures are on sale at each theatre’s box office.

Highway, who is 70 years old, has previously published a memoir called Permanent Astonishment, which won the 2021 Hilary Weston Writers’ Trust prize for non-fiction. He is also author of the bestselling novel Kiss of the Fur Queen.

Highway, however, may be best known for his plays The Rez Sisters and Dry Lips Oughta Move to Kapuskasing.

“Tomson Highway is an icon,” said Leigh Nash of House of Anansi Press, publisher of the new work. “He’s a multidisciplinary artist and his multi-faceted experience is the force that propels Laughing with the Trickster.”

It took many years of research and reading to completely understand them and learn how they “have given form and substance to Western thought, life, and culture,” reads a press statement.

“And I’m going to explain that with each lecture intensively, in detail,” Highway said.

Raised Roman Catholic but no longer practising, Highway grew up in northern Manitoba in Barren Lands First Nation, a community that borders Saskatchewan.

“It was just bush and lakes … We were nomads… It was just a beautiful life,” he said.

The environment played a significant role in his upbringing and remains a major concern to the writer, which he explores in Laughing with the Trickster.

“If we continue having the relationship with the planet that we have today, which is a very abusive relationship, it’s only a matter of time before those forest fires that you read about everywhere come right into downtown Edmonton,” he told Windspeaker.com.

“We are about to pass it on to our children, the next generation, a planet that is unliveable. A planet with air we can’t breathe, water that we can’t drink. None of that stuff and it’s not fair… Our responsibility is to pass on to them a planet that is livable.”

Laughing with the Trickster provides personal anecdotes, including accounts of his accordion-playing father, and trickster stories that give insight into climate change, economic disparity, racial intolerance, and unhappiness.

“The reason God has put you, the reason for your existence, on this planet is not to suffer, not to feel guilty, not to apologize for something you never did in the first place. But, he put (you) on this earth to laugh. Laughter is the reason for existence on the planet earth. To have a good time.”

And having a good time is the most important part of his upcoming lectures. Not only does Highway want to encourage deeper thinking in his audience during his time with them, he also wants to them to have a good time and create laughter throughout each theatre.

A sentiment echoed by his publisher.

During the lectures the audience can expect “laughter as medicine, and the opportunity to consider a whole new worldview,” Nash said.