Three Indigenous players picked up by Panthers squad in PEI 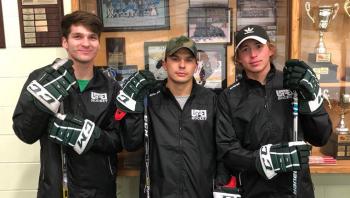 “It’s pretty awesome living in the same place and having a couple of classes together too.” —defenceman Owen Headrick

A persistent pursuit of an Indigenous hockey player paid off for Forbes MacPherson.

In fact, MacPherson, the head coach of the University of Prince Edward Island Panthers men’s hockey squad, got more than he originally had hoped for.

This past winter MacPherson made some initial contact with —defenceman Owen Headrick, a member of the Garden River First Nation near Sault Ste. Marie in northern Ontario.

At the time Headrick was in his final season of junior eligibility, playing for the Pennsylvania-based Erie Otters in the Ontario Hockey League (OHL). Headrick had helped the Otters win the OHL championship in 2017.

As talks about Headrick’s future heated up in the ensuing months, he mentioned to MacPherson that he would like to continue his hockey-playing career with a couple of other Indigenous players, who were also finishing up their junior careers in the OHL.

Besides Headrick, the UPEI club will also include forward Troy Lajeunesse and defenceman Doug Blaisdell.

Like Headrick, Lajeunesse, a member of the Dokis First Nation in northern Ontario, finished up his junior career with the Otters. Blaisdell, a member of southwestern Ontario’s Oneida Nation of the Thames, concluded his OHL career this past spring with the Sudbury Wolves.

“Essentially all three were in their overage year this past season and they were on our radar,” MacPherson said. “We started to do our due diligence on all of them.”

When Headrick expressed some interest in UPEI, he told MacPherson he’d find the Maritime school and Panthers’ squad more appealing if he was joined by Lajeunesse and Blaisdell.

“That’s when we started to open up discussions with the other two as well,” MacPherson said.

Headrick was especially keen to continue playing with Lajeunesse. The two were roommates in Erie this past season after Lajeunesse was traded from the Sudbury Wolves to the Otters midway through the year.

And Lajeunesse and Blaisdell were close as the two had spent the first half of the 2017-18 campaign playing together in Sudbury.

The three Indigenous players are now all living in the same house in Charlottetown. They had their first official practice with the Panthers this past Sunday.

The club’s first pre-season game is Sept. 14 versus the Moncton Blue Eagles.

“It’s pretty awesome living in the same place and having a couple of classes together too,” Headrick said.

While Headrick is studying Business, the other two are undeclared in what they will major in.

Both Lajeunesse and Blaisdell will be eligible to play five seasons with the Panthers. Headrick, however, has only three years of eligibility remaining in the university ranks.

That’s because he used up two years of playing when he spent a season and a half toiling for the Michigan-based Lake Superior State Lakers in the NCAA Division 1 ranks, before joining the Otters midway through the 2016-17 campaign.

Though he’s been in Charlottetown for a brief time, Blaisdell is having a blast.

“It’s pretty awesome so far,” he said. “We have a great group of guys here.”

Like Headrick, Blaisdell has already had a taste of what it is like taking post-secondary courses, albeit online.

He completed three classes from Central Michigan University and two others from Lansing Community College while he was playing in the OHL.

Blaisdell played four full seasons with the Kitchener Rangers. He also started his fifth and final season in the league with Kitchener a year ago but was dealt to Sudbury after appearing in 11 games with the Rangers.

MacPherson is thrilled that both Headrick and Blaisdell will be patrolling the Panthers’ blueline this season.

“We had some significant holes to fill in that position,” MacPherson said. “They bring a lot to our lineup. We’re very excited to have these two in our lineup.”

The Panthers’ bench boss is also excited Lajeunesse will be providing some offence up front. He had a career high 43 points in 60 games last season, splitting his time between Sudbury and Erie.

“We’re really excited about Troy,” he said. “When we were looking for a specific type of forward, Troy fit all those characteristics.”

MacPherson, who is heading into this ninth season as the Panthers’ coach, has had other Indigenous players on his roster before. But the three this year marks the highest in one season.

MacPherson is hoping some school officials might try to take advantage of this fact and hopefully attract some Indigenous fans from the province to some of the club’s matches.

“I never really had to think about that position,” MacPherson said. “I’m just focused on winning hockey games.”

Lajeunesse said he’d be keen to help spread the word about the Panthers to First Nations in the province.

“That would be fun,” he said. “I’m sure Forbes or somebody else would help set it up and let us know.”