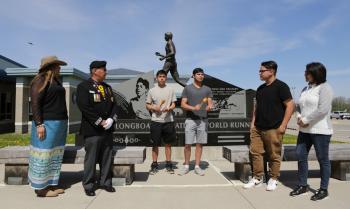 Jager Miller and his mother Jeannine (far right) learn about ancestor Tom Longboat in a docuseries titled “Our War” airing on History Channel on Nov. 11.

“He wasn’t blinded by the fame, I guess. He always stayed close to his roots.” — Jager Miller
By Crystal St.Pierre
Local Journalism Initiative Reporter
Windspeaker.com

On Nov. 11, the History Channel will screen a four-part docuseries titled Our War. The episodes are airing back-to-back starting at 9 p.m. ET/PT.

The series was filmed by the team at Vancouver’s Lark Productions and follows descendants of Canadian war heroes as they embark on connecting to stories from their families’ past.

Included in the series is one of Canada’s first Black servicemen and the great-grand-nephew of a female intelligence officer stationed at Bletchley Park in England, a place of code-breaking during the Second World War.

Miller travels to various historical locations across Ontario with his mother Jeannine to learn about his great, great, great grandfather’s remarkable accomplishments, both during the war and personally.

He spent time learning about Longboat’s job as a dispatch carrier in the The Great War, as well as the extensive training he did as a long distance runner in high profile events, including for the Boston Marathon.

“Learning this stuff was all interesting, Obviously, I heard stories about him. I knew about his war past but didn’t have the extra detail,” said Miller.

The two travelled from their home at Six Nations, Ont. To various locations throughout Ontario including the Longboat Hall, where they were amazed to see the facility still had the original flooring that Longboat ran on during his training for the Boston Marathon, which he won in 1907.

Born July 4, 1886, Longboat spent a lifetime of accomplishment before his death from pneumonia on Jan. 9, 1949.

He was the first Indigenous person to win the Boston Marathon, and the third Canadian. In 1908 he participated in the Olympics and in 1909, at Madison Square Garden after Longboat turned professional, he was named Professional Champion of the World.

In 2018 Longboat was inducted into the Toronto Sport Hall of Honour, recognized for his success as one of the most celebrated pre-First World War athletes

“We’ve never really heard his story before. To us he was just our grandfather. We didn’t look at him in a way as kind of famous, I guess for winning the Boston Marathon, those kinds of things. We were always raised and brought up that he was just our grandpa,” said Jeannine.

Longboat was a ran messages at the front in the Great War.

“They said not a lot of men made it home from that position. They were killed in battle,” said Jeannine, adding she was also told men didn’t usually last more than two weeks being a runner in the trenches.

The show describes that Longboat created his own uniform, allowing him to increase his speed and agility while making his way through the trenches to deliver messages. It also shows how Longboat used his traditional language to further the secrets within the messages between different military posts.

Longboat was declared dead once and injured twice during his time on the battlefield, but he survived and even tried to sign up for the Second World War. Due to his age, he was declined.

During his senior years, Longboat was a familiar face around Six Nations and spent most of his time volunteering to help set up events or taking part in various community events.

“(I liked) learning about how involved he was in the community, learning that he was a very well-known face around Six Nations,” said Miller. “He would always volunteer and help out, no matter the cause. He wasn’t blinded by the fame, I guess. He always stayed close to his roots.”

This humble characteristic about Longboat continues to make his family proud. “He never let the fame get to his head,” Miller explained.

While the show was being filmed, the mother-son duo had the opportunity to visit various locations and were gratified to see how Longboat’s story continue to be recognized.

“It’s so nice to see that people still honour him. And to realize, that’s our family. You know, that’s our great grandpa. It is nice,” said Jeannine.

“The experience overall for this was just amazing. I felt I had so many questions for him during certain times filming the documentary. Some parts felt so real, it felt like he was there.”

One such instance was when the two visited Mush Hall, the Mohawk Institute Residential School in Brantford that Longboat attended when he was 12 years old.

The two witnessed first-hand the wall that students scratched on to escape the “room under the stairs”, a place of punishment for trying to run away from the school.

Later on in his life, Longboat was asked to return to the school and speak about his accomplishments, but he refused, it’s noted.