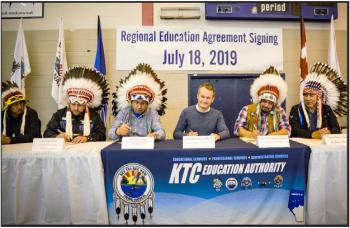 “This is a significant improvement over what we’ve been dealing with. Is it enough? The answer is always going to be ‘no,’ but it’s a marked improvement.” — Al Rollins, CEO for KTC
By Shari Narine
Windspeaker.com Contributor

The Kee Tas Kee Now Tribal Council Education Authority (KTCEA) is confident that a new education funding agreement with the federal government will lead to more success for their students.

“A lot of times over the years we’ve had challenges in regards to graduation rates and keeping our children within our schools,” said KTCEA chair Ivan Sawan, chief of Loon River First Nation in Alberta.

“But I believe this funding is going to enhance that because other services will be brought to local schools now. We didn’t have those kinds of services before.”

The agreement, signed July 18, was a year in the making, says Sawan. However, he points out that talks about education funding have been occurring for the past 10 years with both the Conservative government and the Trudeau government.

The new 10-year agreement provides a stable, flexible and sustainable funding model. Per student funding has been raised to $24,000 from the current $17,000 to $19,000. That increased figure is comparable to support provided by the Alberta government to similar school jurisdictions in northern Alberta, such as Northland, Fort McMurray and Fort Vermillion.

Whether that increased figure will be enough, they’ll have to wait and see, said Al Rollins, CEO for KTC. Northland School Division had trouble this past year attracting teachers, retaining teachers and attracting specialists.

“This is a significant improvement over what we’ve been dealing with. Is it enough? The answer is always going to be ‘no,’ but it’s a marked improvement. But if you want specific articulation as to specifics on ‘is it enough?’ well ask me that question in a year,” said Rollins.

KTCEA operates six schools in five northern Alberta First Nations: Loon River, Lubicon Lake Band, Peerless Trout, Whitefish Lake and Woodland Cree. All schools are Kindergarten to Grade 12. Two new schools will be opening later this fall in Peerless Trout First Nation, one an elementary and the other a Kindergarten to Grade 12. School enrollment sits at approximately 1,200, with the school sizes varying from around 120 students to over 300 students.

If enrollment dips or the comparable provincial funding rates decrease under the United Conservative government, the federal agreement assures that there will be no more than one per cent cut in funding each year.

“We’ve got a stable floor established there,” said Rollins.

The agreement also allows for flexibility in increased funding for KTCEA.

“That’s the uniqueness of this agreement that it has that open clause where…  any initiatives that are coming down for First Nations or for anybody in general, we still have access and there’s still room. We are not locked in … but it’s secured funding for 10 years,” said Sawan.

With this new funding, KTCEA will be able to pay teachers at the same rate as provincial school jurisdictions. Until now, KTCEA teachers were earning 15 per cent to 20 per cent less than their provincial counterparts, making teacher retention difficult in the semi-isolated communities.

However, more than retaining non-Indigenous teachers, Sawan is excited that KTCEA now has funding to allow them to train community members. A recent environmental scan, he says, identified people who were interested in becoming certified teachers.

“We would have to tap into a university, (the University of Alberta) or Calgary university and create the program and this way be able to train our own people,” said Sawan.

KTCEA will also be able to afford to recruit the specialists they need in a variety of areas.

The new agreement will also allow for the development of full-time kindergarten programming to be undertaken in conjunction with parental input.

The central land-based learning camps that students have been attending for the past couple of years, which are facilitated by Elders, will also be enhanced as will nêhiyawêwin instruction and programming.

This agreement with the federal government comes three years after the five First Nations entered into a $1.7 million framework agreement with Alberta Education. The provincial agreement, signed in 2016, provided funding to help develop curriculum and retain teachers, as well as making other resources available to KTCEA.

The work with the province “enhances” what the federal government is doing, said Rollins.

Indigenous Services Canada Minister Seamus O’Regan was in Cadotte Lake on Thursday to sign the agreement with the chiefs from the five First Nations.

O’Regan signed another education agreement later in the afternoon with the Sunchild First Nation.