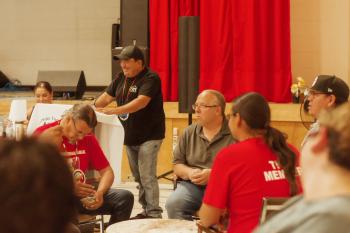 “Prevention is the key and is the absolute right place to start for us because we do eventually want to completely avoid protection altogether…” — Taykwa Tagamou Nation child welfare law lead Kayla Viau
By Shari Narine
Local Journalism Initiative Reporter
Windspeaker.com

It’s been a slow, careful process for the Taykwa Tagamou Nation in northeastern Ontario, and exercising its jurisdiction over child welfare services is coming closer.

At the August annual general meeting, the community unanimously adopted its Child Wellbeing Law. When enacted, the law will apply to Taykwa Tagamou children both on and off reserve and will prevail over federal, provincial, and territorial legislation if conflicts arise.

Steps to enact Indigenous jurisdiction over child welfare are set out in the federal legislation An Act Respecting First Nations, Inuit and Métis children, youth and families, which came into force in January 2020.

But moving on to the next step in the process is not something either Chief Bruce Archibald or child welfare law lead Kayla Viau wants to see hurried. They would like both governments to be flexible when it comes to timelines.

“The governments that we’re sitting down across from (for negotiating) can’t give us deadlines to say, ‘Well, you have to have this done by this time, within 12 months’, or whatever it may be because some of our members in our community might feel that they’re being rushed,” said Archibald.

After all, points out Viau, it took the community almost five years to get to this point and they began the work to reclaim their inherent jurisdiction well before federal legislation was enacted.

“Community work is challenging. It is because, unfortunately, we are dealing with trauma. Trauma is not easy; it’s messy,” said Viau, who is former director of the Nation’s social services department.

Over 100 years of colonial policy, including residential schools, the Sixties Scoop, and oppression has led to culture, language and traditions being damaged and family systems being broken. It has created intergenerational trauma that most community members are still dealing with in a variety of ways, says Viau.

While the community had someone on council to support their children-in-care prior to 2017 or 2018, it wasn't until then that the the system was formalized. But even at that time, adequate resources were not available to fully support families, she says.

This work led to signing a protocol agreement with Kunuwanimano Child and Family Services, outlining expectations and responsibilities. Kunuwanimano operates a satellite office in Taykwa Tagamou Nation to deliver childcare and protection services and family support services to community members.

“We took that experience and the development of the protocol and we used that, I suppose, as a foundation to developing our law. We recognize that developing a law that could more clearly communicate what it is that we expect as a community and what our roles are is something that we had thought about for quite some time,” said Viau.

She said federal legislation provided a funding opportunity to build capacity and fully engage with the community on a law that would be community-driven and community-developed.

However, the drafting process of the actual law, which took about two years, was met with hesitancy from the community, recalls Archibald, because of a history of laws “forced upon our people.”

“The word ‘law’ made them nervous when it came to something like this,” he said. “A lot of people didn’t really understand what we were trying to develop here when it came to this new child wellbeing law. But as we moved along through the process to get everyone to understand what we’re trying to build here, I’ve seen a lot of people, a lot of members, feeling a bit more comfortable.”

The Child Wellbeing Law is currently written with a “first phase approach” that focuses on prevention rather than child protection, points out Viau.

“Prevention is the key and is the absolute right place to start for us because we do eventually want to completely avoid protection altogether…but should there be an appetite for membership to really pursue protection then that’s the route we will go in future phases,” she said.

Before the Nation goes to the negotiating table, Viau says they want to have their foundational pieces in place as well as their service delivery model developed, and they’re not there yet. Key projects currently in the works include the Taykwa Tagamou Nation Youth Centre, the Veronica S. Archibald Healing and Cultural Learning Lodge, and a Safe Home.

Taykwa Tagamou Nation is also in the beginning stages of developing a community-based dispute resolution circle process that will be accessible not only for child welfare cases, but also for family and community disputes.

“Right across Canada in First Nations communities, there’s always a shortage of housing. That’s probably one of the most important aspects of this whole law we’re trying to…implement is being to able to put these families back into a home together,” said Archibald.

He adds both the federal and provincial governments need to understand the depth of change that’s necessary to make a difference in the lives of community members.

“To the chief’s point, if government representatives are coming to the table in good faith and they are really open to hearing and understanding why our law is drafted the way it is and how we…can implement it to its full potential, I don’t have a whole lot of worry that we can get to a place where our funding agreement is robust and it’s adequate and thinks about future generations,” said Viau.

Viau anticipates entering into negotiations with the province and federal governments early in the new year.

Taykwa Tagamou Nation is the first Nishnawbe Aski Nation to have passed a child welfare law.