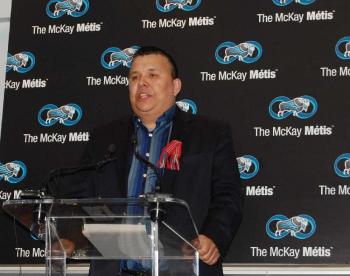 “Up ‘til this point we've had to fight to even be at the table. Now that we’re at the table, the tables are changing or the tables are shifting.” — Ron Quintal, president of the Fort McKay Métis Nation
By Shari Narine
Local Journalism Initiative Reporter
Windspeaker.com

As First Nations leadership in British Columbia was calling for the provincial government to declare a state of emergency due to climate crisis, with floods displacing thousands of people, including many First Nations people in the southwestern part of that province, neighbour Alberta was announcing it would fund a court battle with the federal government on its shipping ban of crude oil through sensitive BC waters.

In announcing a grant of $372,000 through Alberta’s Indigenous Litigation Fund on Monday, Nov. 15, Premier Jason Kenney said the federal government’s Oil Tankers Moratorium Act was a “prejudicial attack” that targeted Alberta, and particularly the Fort McKay and Willow Lake Métis Nations where bitumen is produced. Those Métis Nations are advancing the litigation.

“It is the first time in Canadian history that the federal government has banned the export of one particular product,” said Kenney. “Right now this bill imposes a huge obstacle for Indigenous communities who already face a host of challenges to their long-term economic security.”

The Act, which became law in June 2019, bans oil tankers carrying more than 12,500 metric tons of crude oil (including bitumen) from stopping, loading or unloading at ports or marine installations in the moratorium area.

That area stretches from the Canada/United States border in the north, down to the point on British Columbia’s mainland across from the northern tip of Vancouver Island. It includes Haida Gwaii, the waters of Dixon Entrance, Hecate Strait and Queen Charlotte Sound, reads the government of Canada website. It also says the measure “complements the existing voluntary Tanker Exclusion Zone, which has been in place since 1985.”

“Any legal action that helps Alberta develop its natural resources responsibly and gets them to tidewater is eligible for support through this litigation fund …. It is unfortunate that we must resort to judicial references and lawsuits,” said Kenney.

The province’s funding announcement comes at the conclusion of the Conference of Parties (COP26) meeting in Glasgow, Scotland, where Canada made the commitment to reduce methane emissions from oil and gas to 75 per cent below 2012 levels by 2030.

“Climate change is a reality, (but) at the same time we cannot progress away from climate change at the snap of a finger,” Ron Quintal, president of the Fort McKay Métis Nation, told Windspeaker.com. “The Prime Minister’s plan is very aggressive but I just don’t think it’s realistic.

“The tanker moratorium cuts the knees out from Indigenous communities’ abilities to even be a part of the conversation and I think that in itself is a travesty especially when the Liberal government is supposed to be the government of reconciliation,” he said.

Fort McKay Métis Nation is joined by Willow Lake Métis Nation in a constitutional challenge of the tankers ban. They contend the federal government only consulted with “two or three very vocal” Indigenous groups opposed to energy development and not the “hundreds of Indigenous communities who want to play a role in the economy, who want to be able to bring prosperity to their communities,” said Quintal.

Supporting Quintal’s claim is the legal action already begun against the tankers moratorium by the Lax Kw’alaams, which has territory within the proposed tanker moratorium boundaries. Lax Kw’alaams had planned to develop a marine terminal for oil export. They filed a legal challenge against Canada and BC in 2018.

“The vast majority of Indigenous groups, of nations are pro-responsible development, but too often those voices have been forgotten, ignored and sidelined in the debate about resource development in Canada,” said Kenney.

It’s about Indigenous communities being able to use what’s in their backyard right now in order to bankroll green energy development, says Quintal.

“Global warming is a real thing and we absolutely are very much aware of that. While the Prime Minister is trying to deal with something that is very, very important, not just to our society but the way the Indigenous people see Mother Earth, at the end of the day we're looking at these projects as ways that we can help fund other opportunities and diversifying from that,” he said.

He points to Astisiy Limited Partnership, which brought together three First Nations and five Métis Nations in September to become owners of a 95 per cent share of a pipeline in northeastern Alberta.

Fort McKay Métis Nation has used revenue from this investment for a solar farm, he says.

Revenue from oil development is also being used to provide much needed social, health and educational programs and infrastructure for their people, says Quintal.

He adds that Fort McKay and Willow Lake Métis Nations are committed to developing their resources in a sustainable manner and with a “fine tooth comb.”

Quintal admits it may appear that the Métis Nations are coming “late to the game” with the global push now to move away from fossil fuels in the fight against climate change.

This legal action, says Quintal, will open a conversation that the legislation never allowed to happen.

He insists he’s not talking about building “a hundred different pipelines,” but about sustainable development.

Quintal expects legal documents to be filed with the Court of Queens Bench in Edmonton next week.  He says they will also be reaching out to Ottawa to see if they can open a discussion.

Quintal says they applied in May for $400,000 from the litigation fund. Should legal action need to proceed through the different levels of court and all the way to the Suprema Court, the province will look at “kicking in” more money, he says.

Quintal says their litigation is not tied to any litigation the Alberta government may be taking against Ottawa on the tanker moratorium ban.

Adrienne South, spokesperson for Alberta Indigenous Relations, did not confirm if Alberta was undertaking a constitutional challenge of this piece of legislation.

However, she said Alberta had launched a constitutional challenge in February against the Impact Assessment Act, also federal legislation.

In 2020, Alberta provided Woodland Cree First Nation with the first grant from the Indigenous Litigation Fund. The Woodland Cree received $187,688 to intervene in support of the Alberta government’s constitutional challenge of the Impact Assessment Act, dubbed the anti-pipeline bill.

Because that case is currently in front of the court, South said she would not be commenting on it.

On Nov. 17, the province announced $50 million in funding to 23 Alberta projects to advance innovation and technology to help reduce emissions over the near and long term to address climate change.