Talk it out, change things up, hold on, We Matter co-founder tells Indigenous youth 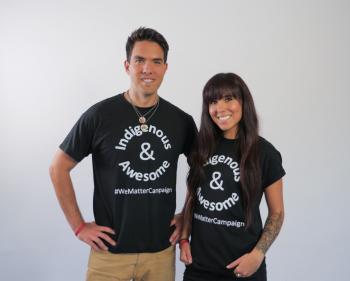 “Mental health concerns are always something we need to worry about, especially in these times of the pandemic where a lot of youth aren’t able to go to school possibly or aren’t able to visit friends and there’s just a whole lot of stress.” — Kelvin Redvers
By Shari Narine
Local Journalism Initiative Reporter
Windspeaker.com

“During the pandemic, it’s really hard on young people. I think one of the hardest things to deal with in life is uncertainty and there’s just so much uncertainty right now,” said Kelvin Redvers, recent recipient of a Governor General’s award.

Redvers and his sister T'áncháy Sarah Judith Redvers were recipients of the Meritorious Service Decoration in February, recognized as co-founders of We Matter, a national non-profit organization that provides support, hope and life promotion for Indigenous youth experiencing hardships.

Kelvin Redvers appeared on the weekly virtual town hall held by the First Nations Health Managers Association on March 4 to talk about the measures to protect against the spread of the coronavirus and the impacts they are having on the mental health of Indigenous young people.

“Mental health concerns are always something we need to worry about, especially in these times of the pandemic where a lot of youth aren’t able to go to school possibly or aren’t able to visit friends and there’s just a whole lot of stress,” he said.

“Dealing with that uncertainty is really hard and I think the perspective I would recommend from the We Matters side is to try to do as many things that can bring you together and even though maybe you can’t have big groups of people, just within a family or within households. Have it become regular, where you do board game night or do activities on the land,” he said.

Redvers and his sister launched We Matters in 2016, an online campaign aimed at bringing awareness to struggles faced by Indigenous youth. It’s a resource, Redvers said, he would have appreciated when he was growing up and facing difficulties.

The website also has toolkits and booklets, specifically geared to Indigenous youth, teachers and support workers. For Indigenous youth, the toolkit provides ways for youth to support themselves and help others if they choose to.

“Sometimes it feels like working and talking about mental health is something only for the professionals, and I think we need to get away from that.…Every single person has the ability to talk about mental health and to support folks who maybe need a little bit of support,” said Redvers. “It can be challenging to do that because we’re afraid of saying the wrong thing, we’re afraid of making it worse. But a lot of times by keeping silent that’s actually the worse thing is then youth perhaps feel it’s not okay to talk about when they feel sad.”

Marion Crowe, CEO for FNHMA, host and moderator for the hour-long virtual event, said youth sometimes were reluctant to adhere to social distancing because they were sad that events had been cancelled or because they couldn’t see their friends.

“It’s so hard to let go of those things and we can’t undermine that,” Redvers said

So the trick is, he said, to fill that gap by replacing something lost with something new.

And to hang on until it’s their time for vaccinations.

Redvers said he understands that some youth are hesitant about getting vaccinated, both because of how they have been treated by the healthcare system and because of history, when Indigenous people were used as test subjects.

“What we try to do in conversations is really take in peoples’ fears and not just to dismiss it; to say, ‘No you’re wrong. It’s totally safe,’ but to listen to folks and, ‘Why is it you’re afraid of this?’ and try to have a conversation around it,” he said.

Redvers added that “generally most youth are going to be excited to have (the vaccination)” and that he was excited for when it would be his turn.

He pointed out that his parents in the NWT had been vaccinated as had one of his sisters, who is a support work in the Yukon.

“It just gives me a peace of mind,” he said.