Suspicion that vaccines will harm is still a struggle encountered on reserves, says Dr. Evan Adams 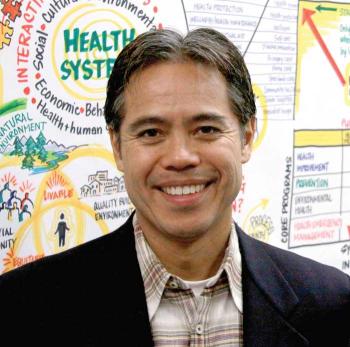 “I’m looking forward to having a vaccine. If I get a sore arm, if I feel a little bit tired, I’ll probably just smile through all of that because … the vaccine is teaching my body to fight off the natural virus.” — Dr. Evan Adams
By Shari Narine
Local Journalism Initiative Reporter
Windspeaker.com

People on reserve have received the coronavirus vaccine at a rate of six times higher than Canadians, yet Dr. Evan Adams said he is still fielding questions about whether or not people should be signing up for injections.

“People are so suspicious that we’re trying to do something bad to them, when we’re trying to do something good for them… I find it sad that some people don’t trust. In a way, of course, it’s understandable we don’t trust particular things, but I hope there are somethings that you would trust and I hope you would trust, say, an Indigenous physician like me, who says, ‘Let me help. I’m very interested and very concerned about you and your family and your knowledge keepers and your community’,” said Adams, deputy chief medical officer of Public Health, Indigenous Services Canada (ISC).

Adams, who was speaking today on the weekly edition of the First Nations Health Managers Association’s (FNHMA) virtual town hall, said he was grateful that science offered such an efficient method to protect against COVID-19.

“I’m looking forward to having a vaccine. If I get a sore arm, if I feel a little bit tired, I’ll probably just smile through all of that because … the vaccine is teaching my body to fight off the natural virus,” he said.

FNHMA CEO Marion Crowe, who hosts the town hall, said it was important that First Nations people were able to hear such information from a First Nations physician.

“I’m grateful to have an Indigenous physician here with us … so that we know to trust in the words that you speak, the inherent knowledge that you share, and the wisdom of your experiences and education… while understanding that some of us are a little bit mistrusting when it comes to any government initiative,” said Crowe.

She added that mistrust has stemmed from a health system that continues to prove itself to discriminate systemically and from history where Indigenous people were test subjects.

Adding levity to the serious discussion, Crowe said she was willing to be a “guinea pig.”

“This is one time I’m happy that I’ll be a guinea pig because I’m right in there with all the front line – police, ambulance, doctors, nurses, … (personal support workers), long term care folks. If we’re going to wipe out everyone, that’s the group we’ll be with, so we’re not going to do that. So just having confidence in the science is going to be so welcoming and evidence-based,” said Crowe.

Evans said the impact of the virus is beginning to lessen on reserves thanks to the vaccine coupled with other measures such as handwashing, physical distancing and masking.

But statistics to this point have been sobering and demonstrate that First Nations people in community, and Indigenous people in general, contract COVID-19 at a rate 1.67 higher than Canadians.

While there are new variants of the coronavirus appearing throughout Canada, none have been officially reported on reserves.

“We expect that one day we will hear about cases on reserve because that’s the nature of how viruses work … so we will eventually see more and more cases of that variant and probably will start to see it in communities,” said Adams.

Adams offered reassurance, though, saying that Pfizer-BioNTech and Moderna vaccines were “excellent” for the UK variant and offered “partial” coverage for the South African variant.

Adams said that when people were tested for the virus, further screening followed to indicate if a variant was involved. The variant was confirmed by testing in a provincial or national lab.

Although ISC is not in charge of the vaccination roll-out, which falls into the jurisdiction of the provinces and territories, Adams said his department would still provide support where needed.

“The provinces are supposed to speak to Indigenous leadership and confirm with them that the plans that they’re making for their communities are acceptable, are well organized, are giving priorities where they should be,” said Adams

He pointed out that depending on the community and leadership, the vaccine will be rolled out differently. However, he said, that roll-out must be “evidenced-based,” which means it would comply with the latest National Advisory Committee on Immunization (NACI) guidelines. Those guidelines have “adults in Indigenous communities where infection can have disproportionate consequences” recommended for Stage 1.

NACI also acknowledged that in urban settings where poverty, systemic racism and homelessness were factors, “these populations may be considered for immunization concurrent with remote and isolated Indigenous communities if feasibly identified within jurisdictions, understanding that these are traditionally hardly reached populations for immunization programs.”

Adams said it has been “nerve-racking” waiting for the vaccine because of production issues experienced by manufacturers, but the shipment of both vaccines will be ramping up.

He said while people are waiting for their vaccines, they “should be happy” for the Elders and others who have received theirs.

“If you are relatively well, you shouldn’t mind having to wait. And those of you with the most risk, yes, you should be prioritized. Let’s keep speaking up for those amongst us who are most at risk and help them get vaccinated,” said Adams.