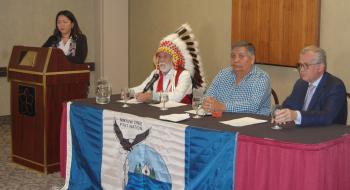 “Are they going to undo the legislation if they find out it impacts our rights?” —former Mikisew Cree Chief Steve Courtoreille

The duty to consult does not play a role in the law-making process. So says the Supreme Court of Canada today as it upheld the federal appellate court’s decision to strike down the Mikisew Cree Nation’s challenge of two omnibus bills brought in by the Harper government.

“It’s a bunch of B.S.,” said former Chief Steve Courtoreille, who led the charge for the Mikisew Cree in the court case known as Courtoreille v. Canada.

“How are they going to know they’re impacting our treaty rights if they don’t talk to us, don’t consult with us?” Courtoreille wanted to know.

“Are they going to undo the legislation if they find out it impacts our rights?” he said.

Courtoreille was joined by Mikisew Cree Nation Chief Archie Waquan in expressing disappointment in the decision, rendered by the nine justices on the Supreme Court.

The Mikisew Cree Nation asserted the amendments could negatively impact their treaty rights to hunt, fish and trap, and they should have been consulted as the legislation was being developed.

The Federal Court had agreed in part with the Mikisew Cree Nation, saying the federal government had a duty to consult the northern Alberta First Nation following the introduction of Bills C-38 and C-45 in Parliament and before it became law. The Federal Court limited the scope of the government’s duty to consult to providing notice and a reasonable opportunity to make submissions.

However, the Federal Court of Appeal overturned the lower court saying legislative actions were immune from judicial review and today the Supreme Court of Canada backed that up with Justice Andromache Karakatsanis writing, “With respect to the duty to consult, the development of legislation by ministers is legislative action that does not trigger this duty.”

The Supreme Court of Canada  has said that Indigenous people have other avenues of recourse.

“While an Aboriginal group will not be able to challenge legislation on the basis that the legislature had failed to fulfill the duty to consult, other protections may well be recognized in future cases when Aboriginal or treaty rights may be adversely affected by legislation, such as declaratory relief,” wrote Karakatsanis.

“Sadly, one of the messages that comes out of the court’s decision today is the court urges First Nations to deal with these issues on a project by project basis is that what they’re looking forward to are … more projects that are being derailed, delayed and not being dealt with for the benefit of both the Indigenous people of Canada and the rest of Canada,” said Janes.

Courtoreille says Canada’s justice system has failed First Nations once more. First Nations will have to take the fight to protect their treaty and inherent rights international.

Janes said there is a “list of international bodies” that have the legal and moral ability to hold Canada accountable for following through with the public commitment it made as a signatory to the United Nations Declaration on the Rights of Indigenous Peoples.

The five-year legal battle ran up a price tag of $500,000, which, said Jane, is a fairly low figure and a short time period for such court action.

In a statement, she said, “This decision is not the end of our journey to protect our lands and waters. The Supreme Court held that the government must act according to the Honour of the Crown and we will continue to hold the federal government to that high standard.”