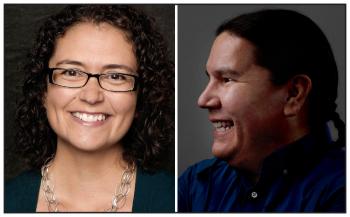 “We all have things we're learning about ourselves, and we're also all on various healing journeys at the same time, because we're all impacted by colonialism.” — Waubgeshig Rice
By Odette Auger
Local Journalism Initiative Reporter
Windspeaker.com

For almost a year, the Storykeepers podcast has amplified the work of Indigenous writers with 47,000 downloads and counting. Sharing enthusiasm for books, the podcast focuses on one book per month.

Waubgeshig Rice and Jennifer David are hosting the podcast together. Rice brings his perspective as a writer as he works on a sequel to Moon of the Crusted Snow. His voice is familiar to listeners from his work as a CBC radio show host and journalist. David brings her background in literature, communications and journalism to her hosting role. This season Rice will host every second month as he’ll be busy as a juror for this year’s Giller Prize.

To see up and coming writers develop their identity, and skills and to see other people appreciate their work is exciting, the hosts say.

“They're all writers telling stories, but it's not just as storytellers,” said David of the podcast’s name. She said the writers embody different Indigenous cultures, histories, ways of seeing the world. “They're keeping our stories.”

Both podcast hosts are trained journalists, yet they do not interview the writers of the books themselves.

“I very clearly did not want another show about interviews with writers,” David said. “There's enough of those out there.” It’s more like a book club, and it’s a unique space where Indigenous people talk about books by Indigenous people.

Storykeepers is unique in having a two-host format, with conversation moving between Rice and David, and a different guest host every month.

Guests have included Tanya Talaga, Willow Fiddler and Rosanna Deerchild. It’s not easy to involve multiple voices in the podcast, and Rice notes it is something they craft carefully.

“That has been one of our initial challenges,” he said. “Hitting that rhythm and creating an energetic and fulfilling discussion, because it's all done over Zoom.” The pandemic prevents them from being physically at a table together, but they’ve managed to create a warm space filled with the love of books and writing.

To create that book club experience, they prepare by sharing thoughts on themes with guest hosts. They go over ideas they’d like to touch on in advance, but the podcast is completely unscripted sharing. That’s very different from radio broadcasting, where everything is scripted and time marked down to the second, said Rice.

Part of creating a warm atmosphere is having a consistent, reliable format and not being overly technical. “It’s not really pretentious and it’s not too ‘inside baseball’,” says Rice, which makes the podcast more accessible to a wider audience.

Choosing guest hosts follows the same instinct. They think of someone who has a personal or professional connection to the book or to the subject matter, Rice said. This sets the scene for a wide ranging conversation.

“Every conversation has been different,” he said. Not just because of the distinct choices in books, but also “the dynamics are sometimes predictable and sometimes they aren’t, which makes it fun.”

With Indigenous hosts there is a depth of relating to each other and the book.

“It's always three Indigenous people talking, and it's always going to be that way,” said Rice. “A beautiful thing about having these opportunities is to help each other, share their stories and to make these connections in a public way.”

An example was when guest host Duncan McCue was discussing Richard Wagamese’s Medicine Walk. It was close to Father’s Day, and the main character’s relationship with his father is the spine of the plot. While they were recording, all three hosts shared about their own relationships with their fathers and found things in common around loss and fathers who “had to learn on their own.”

Wagamese recognized “we need to do the work, in terms of repairing and breaking the cycle in many ways,” said McCue. “He was very generously taking us into his own challenges and struggles and saying, ‘this is how… I am healing and trying to be a better man and a better father’. And letting Indigenous people know that it's okay. I mean, we have complex family histories with pain and trauma that we need to overcome.”

Rice said, “we weren't really prepared to talk about our families that personally. I think what emerged was a special moment because we, the three of us, made that connection in real time.”

That been a highlight for Rice and it illustrates what’s special about Storykeepers.

“We all have things we're learning about ourselves, and we're also all on various healing journeys at the same time, because we're all impacted by colonialism.”

David remembers her first exposure to Indigenous literature in university as a revelation. She envisions her listeners as avid readers like herself, who are genuinely interested in reconciliation. She also manages a suite of cultural awareness and cultural competency courses at Nvision. She hopes listeners see Storykeepers as another tool to better understand Indigenous people.

Rice said Storykeepers is three Indigenous people talking about a book by an Indigenous author.

“It's always important to remember that the Indigenous experience is a spectrum.” Rice explained. This means being as inclusive with our language as possible, “showing that there are just so many different ways to experience life as an Indigenous person.”

That commitment to diversity shows in how the hosts select books. They make sure to have representation of all genders—men, women, non-binary and two-spirit. They choose books from different parts of the country—First Nations, Inuit, and Métis writers. While they mostly cover fiction, they also want to talk about plays, poetry and non-fiction.

Storykeepers has landed well, with nore than 40,000 downloads of the first eight episodes from the launch last March to December 2021. David was pleased to learn a teacher in Ottawa brought the podcast into her literature class, and it caught on. The school district is now including episodes in the Grade 11 curriculum.

While the podcast amplifies writers’ work it also celebrates it. Rice has found that same spirit among other Indigenous creatives.

“We try to emulate that with the podcast too, because we've seen how beneficial that is for everybody in the community. To promote each other, to hold each other up, to carry ourselves with respect and gratitude.”

“It's an intention that I hope a lot of other people adopt,” said Rice. “I think that's what you should do as a good community member. That's your responsibility as someone who wants to widen the circle for other people. You keep promoting the others who have work to share, who have voices to be heard, who have truth to relay. I'm really glad that people see Storykeepers as something that can accomplish that.”

Listeners can catch up on all previous episodes at Storykeepers website, and find new episodes once a month on their favourite podcast platform.