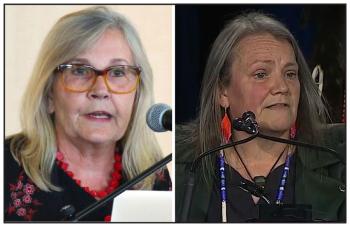 “Our battle with the Canadian government has been trying to get access to records that are part of the Indian Register and the Indian Trust Fund.” — Ed Sadowski with Children of Shingwauk Alumni Association
By Shari Narine
Local Journalism Initiative Reporter
Winspeaker.com

There was only one time she remembers being angry and shouting as a member of the Truth and Reconciliation Commission, said former commissioner Marie Wilson, and that was about the existence of residential school records that could help find lost children.

It is one of the memories “that stands out in a million memories,” an emotional Wilson said in her keynote address at the National Gathering of Unmarked Burials conference in Vancouver on Jan. 17.

It was at an all-parties’ table in Ottawa with the signatories of the Indian Residential School Settlement Agreement. Signatories to that 2006 agreement include the federal government, the Roman Catholic entities, and the Presbyterian, Anglican and United churches.

“There was an endless frustrating conversation about…documents and why couldn’t we have them, and where were they, and who was keeping them hidden and who was denying their existence,” said Wilson.

The TRC had no specific mandate around missing children or unmarked graves but at the statement gatherings, survivors talked about the children they knew who had died at the school or had disappeared and there was “variations of deep, deep loss,” said Wilson.

The TRC had “barely begun” that work, she said, but when the commission released its final report, it included an entire volume on missing children and unmarked graves. The information gathered by the TRC in its six years identified 3,200 deaths. Of those, one quarter of the children did not have their full names recorded and one-third did not have their gender recorded.

“At the very closing of our TRC in 2015 in Ottawa… (my final remarks) …were about the children… Of the numbers that we knew at that time…50 per cent of them, half of them...would be considered criminal today in Canada (because) we did not know the cause of death. And as for where those children were buried, we knew that it was all over the map, literally,” said Wilson.

“All over the map” was driven home when on the same day of Wilson’s talk, the Wauzhushk Onigum Nation announced an eight-month investigation had resulted in the location of 171 anomalies by ground-penetrating radar (GPR) at the site of St. Mary’s Indian Residential School in Kenora, Ont.

Just the week before, the Star Blanket Cree Nation announced GPR had over 2,000 “hits” at the site of the former Qu’Appelle Indian Residential School site near Lebret, Sask. Chief Michael Starr said among the discoveries was a partial piece of a child’s jawbone.

Both schools were operated by the Roman Catholic Church.

Wilson’s remarks underscored the need to get access to all records, whether they are held by the federal, provincial, territorial or municipal governments, churches, universities, culture and Aboriginal research centres, organizations, or community archives.

Her remarks also underscored the continued difficulty in getting access to those records.

Ed Sadowski, with Children of Shingwauk Alumni Association and retired Shingwauk Residential Schools Centre researcher, recounted the difficulty they have had in getting records that are more than 100 years old from the Canadian government that could help identify four children.

“Our battle with the Canadian government has been trying to get access to records that are part of the Indian Register and the Indian Trust Fund,” said Sadowski.

The Indian Register is a compilation of all First Nations people since about the 1800s, he said, while the Indian Trust Fund includes a line-item ledger indicating what costs students paid for, including their own coffins.

“…Indian Agents would request monies to bury children who died at the institutions,” wrote National Chief RoseAnne Archibald in a twitter post. “Many were secretly buried & those children’s names must be recorded somewhere…”

Sadowski said they were actively searching for the names of two boys, who drowned in a pond in 1915. That pond has since been filled in and is part of present-day Snowdon Park in Sault Ste. Marie, Ont.

While doing that search, he said, they became aware of two girls who passed away at the Shingwauk hospital.

Raymond Frogner, head of the archives at the National Centre for Truth and Reconciliation (NCTR), said it wasn’t until Tk’emlúps te Secw?pemc uncovered the 215 unmarked burials at Kamloops Indian residential school in 2021 that NCTR was able to strike an agreement with the Missionary Oblates of Mary Immaculate Lacombe to get the Oblate residential school records and codexes. Those records had been promised since 1991 when the head of OMI Lacombe apologized for the residential schools they had operated.

“We’re now getting the lion share of everything they had regarding these schools. It’s always going to be difficult to say we have absolutely everything because we don’t have a register of all the records they actually hold,” said Frogner.

However, he said, a legal agreement to that effect has been signed with OMI Lacombe.

“The one caveat is we are still waiting for them to agree on releasing all of their personnel files. That’s the one set of records they have not fully released to us yet,” said Frogner.

The three-day forum, which concludes Jan. 18, was hosted by the Office of the Independent Special Interlocutor for missing children and unmarked graves and burial sites associated with Indian residential schools.

Kimberly Murray was appointed to the position in June 2022.

“These records that we are trying to obtain impact real people, impact real lives. People looking for… their children, their missing classmates, community members,” said Murray.

“This isn’t an academic exercise. These records can no longer be held in vaults and held by colonial institutions who control who can see them and access them,” she said.