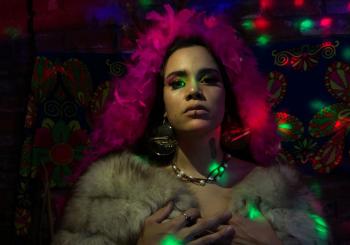 “It just shook me to my core. And I've had to learn to do a lot of things differently and look within and do some shadow work. I'm grateful for that.” —Bebe BuckSkin about the COVID-19 pandemic
By David Owen Rama
Local Journalism Initiative Reporter
Windspeaker.com

At 32 years of age Bebe Buckskin (aka Danielle Ghostkeeper) is already a confident seasoned performer with a powerful voice and a smokin’ band.

The Calgary-based singer-songwriter grew up in the Métis settlement of Paddle Prairie in Northern Alberta as part of a tight musical family who loved riding horses, trekking out to the bush, and playing country songs together in their down time.

“Not a lot of people would have pegged me for a rodeo chick, country singing kind of gal. I did grow up singing primarily country music, but I definitely switched gears over time,” Buckskin said.

Before Buckskin moved south to the city when she was 18, her childhood was filled with music and rodeo. Her father was a bull rider, her grandfather a fiddle player, and her mom sang and played guitar in a 90s country gospel act called Creative Harmony.

Buckskin grew up singing in the church choir, riding horses around her community, and mimicking her mom, having seen her perform as a young girl.

“I was just like a super down-home country bush Native kid,” Buckskin said.

With her move to the city though, Buckskin took things in a different direction. After forays into hip hop and punk she eventually developed a scorching blues-rock sound that perfectly utilizes her powerful voice.

She references the 2017 documentary Rumble: The Indians Who Rocked the World, a film about how Indigenous musicians influenced the blues and rock n roll.

“It totally resonated with my soul,” Buckskin said about the blues.

“I feel like it's the genre that sort of resonates with me most out of any. Indigenous people have a lot to sing the blues about. That’s why I resonate with blues music. Those parallels between Black culture and Indigenous culture and the similarities between our struggles.”

With COVID-19 still biting at our heels, life in 2020 has become a struggle for the majority, and touring musicians like Buckskin are feeling the pain. With live events pretty much shut down all year and still a mystery for the future, the music industry has been working creatively to reimagine the live music experience for a socially isolated world.

To do their part to lift the mood and celebrate the end of 2020, the Aboriginal Peoples Television Network has added a special companion to their annual Indigenous Day Live celebrations with the new Winter Solstice edition.

Buckskin has become a favourite performer at the event, blowing minds with her blazing stage presence in the past.

“This is our third time performing for Indigenous Day Live, so we feel super blessed and honored that they would have us perform again.”

That’s just a sample of the many excellent artists scheduled for performances throughout the week.

Indigenous Day Live Winter Solstice will certainly be a source of fuel for Buckskin after being separated from her fans, her band, and her work for most of 2020.

The last time Buckskin had the opportunity to play live with her band was in Nashville back in February. Before COVID-19 changed the world, the musician had been working as a songwriter in the “Music City.”

“I'm a melody maker. I've been singing since I came out of the womb. I just came out singing. So I feel like I'm more of a music maker than a lyricist, but I do take pride in my lyrics as well.”

She was originally contracted by Montreal’s Outloud publishing and sent to work with other songwriters in Nashville and became so enamored with the scene down there that she hopes to make it her new home when the world starts to return to something a lot saner than current times are offering.

“Nashville is like the hub of the music industry. They do call it Music City and it's not only country now. It's expanding upon so many different genres and they're very raw. The rock scene is actually booming there right now, and I feel like it's a great time to take advantage of that wave,” the singer explained.

Buckskin and her band had recorded their sophomore EP in Calgary and released it back in April of this year to much acclaim. She called the five-song release Asisky, which means “Earth” in the Cree language.

Lately, as a songwriter Buckskin has been working to incorporate her Nêhiyaw language into her songwriting style. She admits that the rhyming process can be incredibly difficult due to the differing structure of the Cree language, but she has been consulting with her grandparents to help her work it out.

“I always write coming from my personal experience as an Indigenous woman from Northern Alberta growing up in an amalgamation of cultures, because I am Métis. So we do have the gospel thing, and the fiddle, and the jigging, and also some European influences within our culture. “

Buckskin’s deep love for American music like soul, blues, and country rock led her to pursue a dream to record at the legendary Alabama recording facilities, FAME Studios, where artists Aretha Franklin, Little Richard, Otis Redding, Wilson Pickett, and scores of other musical legends laid down hit after hit with the backing of the Muscle Shoals Horns & Rhythm Section.

After being inspired by the 2013 documentary Muscle Shoals, Buckskin applied and received a Canada Council arts grant to fund her trip down to FAME to record her first full length album. But once the pandemic hit the band collectively decided that they were going to put the release on hold until they could tour it properly. She admits in hindsight that holding back on the release has given her and her bandmates the opportunity to polish recordings even further.

Listening to Buckskin perform it’s obvious that her voice is a force of nature that comes from a powerful place within. She can express both the toughness of a rodeo rider and the vulnerability of a poet. And even though she admits that the pandemic has kicked her ass in many ways, it has also provided her with opportunities to rise up and adapt.

Buckskin says of her initial experience of the pandemic, “it just shook me to my core. And I've had to learn to do a lot of things differently and look within and do some shadow work. I'm grateful for that. Now I’m I trying to look at everything with a positive spin. I think that's important.”

Bebe Buckskin will lay down her positive spin for two of the five days of performances lined up for the APTN Indigenous Day Live Winter Solstice special. The event streams throughout the day from Monday Dec. 21 through to Friday Dec. 25 with Buckskin taking to the stage on both the Monday and the Wednesday.

To check out the full APTN Indigenous Day Live Winter Solstice schedule and performer line-up log in to indigenousdaylive.ca